Never underestimate the power of human stupidity, says Yuval Noah Harari in his book " 21 Lessons For The 21st Century". If anyone doubts this truism he has only to see what we have been doing to the Himalayas for the last three decades, particularly in Himachal and Uttarakhand, in the name of development.

This stupidity also involves ignoring the pleas of local residents/ villagers, the advice of experts, and the science of global warming, seismology, forestry and glaciology. It is a stupidity based on faulty economic models that deliberately ignore the disruption of local livelihoods, fail to account for the value of the natural environment or the ecological services it provides, the costs of destruction of life and property ( Rs. 50000 crore and at least 5000 lives in Kedarnath 2013, 221 dead in the Malpa landslide in 1998, 768 dead in the Uttarkashi earthquake in 1991; we are still counting the losses and the dead in the Rishiganga flood this month).

Nobody has even begun to estimate the losses to the environment, which in any case cannot be compensated or replaced by legal tender.

We should also not fail to notice the many ironies implicit in the latest tragedy and environmental disaster in Uttarakhand. Just one day before the flood the NITI Aayog called for an " economically responsible approach by the judiciary" to projects, and a study on " the unintended economic consequences of judicial decisions that have hindered or stalled big ticket projects on environmental grounds." Seriously? What is actually needed ( as Rishiganga proves) is just the reverse- a study on "the unintended environmental consequences of judicial decisions- or the lack of them- that have promoted big ticket projects on faulty economic grounds."

The second irony is that, contrary to the NITI Aayog's whining, the judiciary has done precious little to protect the natural environment from the governments's "big ticket" depredations: the utterly irresponsible Char Dham Highway marches on, even as the SC takes its own time to decide on the width of the road; in Mumbai's Aarey forests hundreds of trees were cut at night because the courts did not deem it fit to issue a stay order; it has been almost five years since Mr. Ravi Chopra of the People's Science Institute Dehradun, appointed as an expert committee by the Supreme Court, submitted his report recommending cancellation of 23 out of 24 proposed hydel projects on the Ganga and its tributaries but the Court has yet to take a final decision on the matter even while it has stayed them; a report submitted by me to the Himachal High Court in 2010 recommending a moratorium on all hydel projects in the state until the listed vital issues of environmental protection were addressed, remains more or less unimplemented.

Roads and railways through Protected Areas, de-notification of wild life sanctuaries, violation of Coastal Zone rules, mining in no-go areas and pristine forests ( Western Ghats, Dehing Patkai in Assam, Hardeo Arand in Chhattisgarh, Saranda and Chaibasa in Jharkhand) - all continue more or less on the whims of governments( central and states ) with very little check by the judiciary. And still NITI Aayog behaves like Oliver Twist!

A third irony : just a week after the Uttarakhand tragedy on the 15th of this month, the Supreme Court cleared the diversion of 614 hectares of forest land in Himachal for the execution of 138 big projects, including hydel power plants. Why are we unable to read the writing on the wall, or in this case, the Himalayas

The fourth irony: Reni village in the Rishiganga valley, where the maximum damage and deaths took place on the 7th of this month, was the heart of the Chipko movement in the 1970s to save the forests and environment of this unfortunate state! A tragic, self-fulfilling prophecy if ever there was one.

Here's another one : in 2019 one Kundan Singh of the same village Reni had filed a PIL in the Uttarakhand High Court against the Rishiganga project alleging unsound environmental practices, operations which endangered the river and the wildlife, deprivation of traditional villagers' rights by the project. The Court had issued notice to the centre and the state for a response within 3 weeks, and the case languishes in judicial limbo. A timely decision, or even a stay order, might have prevented this catastrophe. Nature has delivered the judgment the lordships could not, vindicating Kundan Singh, but at a terrible cost.

There is more than enough empirical evidence, scientific studies and expert committee reports to establish the detrimental effects of hydel projects in mountainous, particularly the para-glacial, terrains. They cause damage in two ways: one, the blasting, tunneling and road construction result in landslides, permanent loosening and fracturing of the strata, deforestation, drying up of aquifers and water sources; two, the monstrous quantities of muck produced by these activities ultimately find their way to the rivers, raising their beds and squeezing them, reducing their capacity to carry water and debris, causing massive floods downstream when extreme events occur. This is what happened at Rishiganga.

The magnitude of the destruction which the central and state governments contemplate inflicting on the Himalayas in these two states is staggering. According to a 2019 report of the Natural Heritage Division of INTACH there are 1000 dams blocking the flow of the Ganga ! In Uttarakhand 76 hydel projects are already commissioned or under construction on the Ganga and its tributaries and 70 more are planned. Himachal has planned to exploit 24000 MW of its identified potential of 27436 MW. In pursuit of this it has decided to spare not even the high altitude ( 3000 meters +), snow bound Chenab valley where it has sanctioned 49 projects with a capacity of 4032 MW, never mind the irreparable ruination of this most fragile of para glacial landscapes. One such project- the 300 MW Jispa project with a dam height of 200 meters at an altitude of 3245 meters which will submerge 12 villages- is at a distance of just 10 kms from the Gepang Gath glacier, the state's largest. 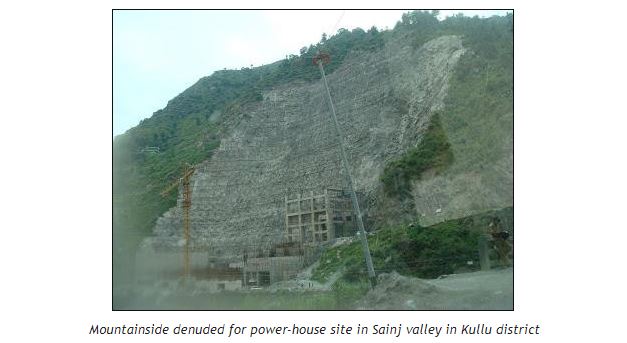 The Ganga, as well as Himachal's rivers, all originate from glaciers. These are retreating at an increasing rate, creating glacial lakes which are multiplying and increasing in size due to global warming. An ISRO report ( findings of which were published on 22.1.2019 by the Hindustan Times) revealed the startling pace of melting/ retreat of the Gangotri glacier and its three main tributaries- the rate of Gangotri was 12.10 m., and the Chaturangi, Satopanth and Thalu were retreating by 22.84, 22.88 and 30.66 meters per annum, respectively.

It is no different in Himachal, as the increasing number of glacial lakes there prove. There are 958 glacial lakes in the state, each of an area in excess of 500 sq.m, and most of them are moraine dammed, which are fragile. A State Council Of Science and Technology report reveals that in just two years ( 2013-2015) the number of glacial lakes went up by 103; in the Sutlej basin alone, 352 more lakes were formed in the 20 years between 1993 and 2013.

Some years ago the then MLA of Lahaul-Spiti told me that when he was a student the Bada Shigri glacier used to extend to the banks of the Chandra river; today it is not even visible from there. Surely the Himachal govt. has not forgotten the cataclysmic floods in the Sutlej at the beginning of this century when a glacial lake had burst in Tibet?

Other than the environmental damage and the hardships imposed on local populations, does it even make economic sense to continue to build hydel projects in mountainous regions?

First, the regular disasters caused by these projects cost thousands of crores in restoration/ compensation/ rehabilitation, negating much of their financial benefits.

Second, are these projects even viable in the long run, the 30-50 year life cycle of such projects? At the rate the glaciers are retreating there will probably not be enough water for them in a couple of decades: with the failure to meet the global warming targets of the Paris Accord, half of them would have disappeared by 2050.

And finally, the cost of solar power is now less than half the cost of hydel power, so why persist with destroying the mountains and endangering the future of hundreds of millions who depend on them?

Surely, the power of human stupidity cannot be boundless. 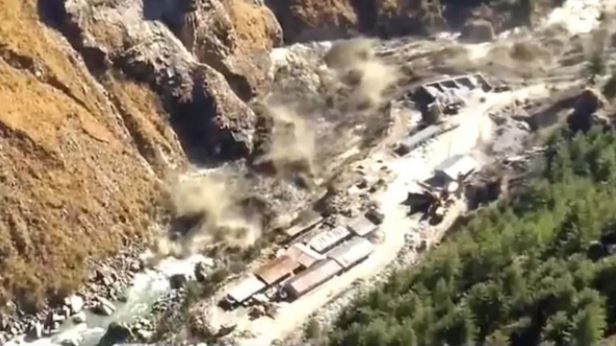