Mohamed Reza Pahlavi, the second and last Shah of Iran from the Pahlavi dynasty, was the son of an Iranian gunnery sergeant who managed to seize control of that country in 1925 and crown himself King.

Like Rajput kings who gave themselves extravagant genealogies of being descended from the sun or moon, Mohammed Reza gave himself a 2500-year-old lineage descending from Cyrus the Great. To him the surest and simplest way to greatness was to use Iran’s new petro-dollar millions to buy the latest weapons money can buy. Just a few years after the blockade induced boom in oil prices, in 1974 Iran became the first country to operate the then state of the art F-14 Tomcat fighter armed with the even now formidable Phoenix air to air missile.

The Iran air force bristled with formidable weapons like F-4 Phantom jets which the USA was using to pulverize Vietnam and with which Israel devastated the Egyptian air force and tank columns in 1973.

It was said that the Shah was an avid reader of the US weekly magazine “Aviation Week & Space Technology” which was fetched each week fresh off the press by diplomatic courier. Like a manic who scours mail order catalogues, the Shah used to pick his toys from the weapons showcased in the magazine. Iran then was a low-income country, but the Shah’s vision was soaring.

The Americans encouraged him. The USAF and Navy loved him for he helped in defraying the cost of development of new weapons. Flushed with his weapons he grandiosely announced that after the two superpowers, Iran was the greatest military power and, encouraged by the USA, he appointed himself as the keeper of peace and order in the near region. Reza Pahlavi’s megalomania blinded him to the reality of Iran and a man called Ayatollah Ruhollah Nasrollah Khomeini, a Shia theologian who was banished to a Paris suburb. We know what happened next.

This should be a lesson in history for all those strategists who think weapons confer status? India’s diplomatic and military establishment seems gripped by grandiose visions of an India sitting on global high tables such as the UN Security Council. India’s new middle classes talk easily about India becoming a superpower and against this rising tide few are willing to question why?

Recent studies reveal that as much as 70% of Indian households make do without the minimum standards evolved by international bodies such as the UNDP to be considered above the poverty standard. India’s own poverty line is indeed a starvation line that prescribes a minimum caloric norm. Even by that self-serving standard a quarter of India is excruciatingly poor. Not only is India poor it is economically backward with a relatively small manufacturing base supporting a disproportionately large service sector, giving it the economic profile of a post-industrial society like the USA or Europe. We mostly miss the irony of looking post-industrial without having industrialized!

India’s pursuit of iron clad national security and global status ambitions makes it annually import as much as $20 billion or Rs.120, 000 crores of weapons, putting us in a league of our own. Our military leaders want even more and to this extent they now have a vested interest in weapons acquisitions. Most of our other engineering imports are to facilitate domestic production either as plant and machinery or as components. Thus, they contribute to overall value addition. Military hardware imports are a one-way street and the only ones who benefit by it are the exporting economies.

In the next decade alone India will import over $200 billion of weapons. Consider this. This is the kind of money that can gives us a brand-new high-speed rail quadrilateral or ten new world-class cities of ten million people each. If we factor the military’s wish list, then we are really looking at infinity. And much of what is being planned for acquisition is not even required.

Take for instance the French built Dassault Rafale fighter-bomber that the IAF is desperately seeking. Each of these aircraft will cost at least Rs.1600 crores and the IAF wants 126 of them. It will get 36 of them for now. Not being satisfied with this the IAF is thinking ahead and now wants large numbers of an even more costly fighter - the American F-35.

This will be in addition to the 272 SU30MKI fighter-bombers the IAF is in the process of inducting. Those knowledgeable will argue that the SU30MKI confers far greater lethality than the Rafale and costs about Rs.650 crores and hence why buy Rafales? This is the exact question then Defence Minister Parrikar had posed. Besides SU30MKI’s are already being assembled by HAL at Nasik and its AI-31FP turbofan engines at Koraput.

Then lets consider what is the aircraft the Rafale is supposed to replace? It’s the now outdated MIG21 series. The MIG21 is as comparable to the Rafale as cheese is to chalk. The MIG21 is described as a frontal aviation aircraft designed mainly to intercept enemy aircraft and on occasion to drop small bombs and conduct ground attacks. It has a very limited range and endurance.

The logical replacement for the MIG21 is another light single engine interceptor such as the Tejas LCA or even the more expensive Saab Gripfen, but not an expensive heavy twin-engine long-range fighter-bomber. It’s akin to wanting to replace a Maruti800 with a Mercedes E class or BMW 5 series. That might be okay, if you can afford it. If you cannot, good sense tells you that one should shop around for a Swift or Amaze.

Quite clearly there is no scope for a guns vs. butter debate here, but for a sensible and rational gun vs. gun discussion. There is case for cutting the coat according to the cloth.

Empirical evidence suggests that the survival ability of a twin engine fighter is not better than a single engine fighter in a conflict. It gives it a bigger load carrying capacity and more range. But single engine fighters like the Gripen too have good range now. As the PAF showed in the post Balakot engagement good radar and better missiles even on an old platform like the F16 can be more than a match for heavy fighters without them.

Lower unit and maintenance costs means we can buy these light fighters in greater numbers. If we add 126 Rafale's to our SU30MKI’s, upgraded MIG29’s and Mirage 2000’s, it will mean that the IAF will be operating over five hundred 4+generation fighter aircraft, possibly more than the even the USAF does? These kind of numbers might just set off an arms race with China and with its much bigger GDP the PRC can impose unacceptable economic costs on us. Even then the military brass will want even more.

This is the time for the Prime Minister to put his put down and order the IAF to forget the MMRCA and prepare to induct the Tejas, and also to order the ADA and HAL to get their act together and ramp up production of the Tejas LCA to quickly replace the MIG21’s. The Indian Navy has cut its coat according to the cloth it has been given and has quickly moved with the development of the naval variant of the Tejas. Then why cant the IAF?

More than numbers India needs a strategy to keep the Chinese deterred. This strategy must threaten to disrupt China’s economic interests and inflict huge costs on any Himalayan adventure, not just in the Himalayas but also at other theatres of our choosing.

The PLA might have the advantage of interior lines in Tibet and Xinjiang, but the IAF and Indian Army maintain bases and formations close to the border on the plains giving them many tactical advantages. Just adding more troops and call them strike formations makes little sense, as high altitude battlefields require acclimatization and the conflicts in all probability will be long over before they can be deployed into battle.

Donald Trump was rewarded for his visit with a $3.6billion order for attack helicopters. He went back happy. The dependence of helicopter gunships for ground attack again is an iffy thing. There is much literature available now about how they may not be all that useful against heavily defended ground forces. Lets not forget how Afghan Mujahideen exacted a heavy toll of Soviet attack helicopters in Afghanistan. Unfortunately our commanders seem to have embarked on a numbers game, with the potential adversaries and among our own services.

If the strategy is to be to deter wars on us, clearly accretion to numbers is not the answer. India’s means are limited and we must think of defending India with what we can afford. 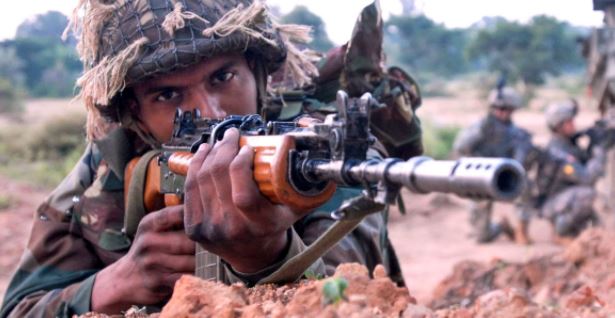