Where does India stand on its position vis-à-vis developments on Myanmar?

Sao Shwe Thaik became the first President of the Union of Burma (4th Jan 1948) and the last Saopha of Yawnghwe. A sense of ominous foreboding amongst the new union’s restive ethnicities was palpable and on its first anniversary of Independence on January 4, 1949 the Statesman had warned bluntly, “Co-operation and understanding cannot come about so long as the element of violence or threat of violence exists, for violence has no counterpart in freedom, and liberty ends where violence begins. The progressive retreat of democracy in the world today is mainly due to the worship by nations of the cult of physical force. The deterioration in this direction has been such that the much-vaunted democracies are nowadays hardly distinguishable from totalitarian states”.

What was prophetically forewarned in 1949 still haunts Burma (changed to Myanmar in 1989) in 2021, as the Military Junta (Tatmadaw) has seized back power, yet again.

Myanmar had managed to persist with democracy with subsequent Presidents like Ba U and Win Maung, but the Junta takeover by Ne Win (1962-1988) changed the essential narrative. Much before Myanmar’s infamous reputation and perennial association with the Junta and the continuing ignominy amongst the world’s longest running civil wars, it was also famous for its distinguished diplomat and two-term Secretary General of the United Nations, U Thant (1961-71).

In the heydays of the cold war, U Thant, had emerged as the only acceptable candidate to both the United States and the Soviet Union. As the longest serving UN Secretary of State ever, U Thant, was well poised for a third term, but for his own reluctance – in him, Burma had a rare honour of an internationalist who is widely credited for defusing the Cuban Missile Crisis, Civil war in Congo and an avowed moralist who stood against apartheid in South Africa and criticised the American conduct in the Vietnam War.

The unassuming democrat who counted Mahatma Gandhi as amongst his foremost influences, nearly won the Nobel Prize, but for the malicious role of Gunnar Jahn, the Chairman of the Nobel Peace Prize Committee – but his inglorious treatment at death in his own Burma, at the hands of the Junta, typified the indignity and pettiness that is given to insecure and illiberal leaders.

Today, the nascent re-experiment with democracy that ran barely for 5 tentative years, is practically over. The familiar state of emergency, curbs and censorship are in place, and the Junta is clamping down ruthlessly on the pro-democracy protests. The immediate neighbourhood (China, India and ASEAN countries) are calibrating their reaction in line with their own perceptions of national priorities, stakes and necessities.

It is only the Western democracies led by the United States, who have given a call for punitive action via targeted sanctions. What is clear is that there will be no backing down by the Military Junta (Tathmadaw) anytime soon, and the clearly mixed international reaction to the latest coup d’état, will give the Junta some breathing space and engagement alternatives to sustain itself, as they had done in their earlier regimes. This Western call for the isolation and ‘pariahisation’ of Myanmar is neither unprecedented nor intimidatory enough for the Junta to entertain calls for the restoration of democracy.

Where does India stand on its position vis-à-vis developments on Myanmar? A mix of hardnosed realism, realpolitik and selective amnesia on the historical and moral insistences on democracy, in Myanmar. Aiding India overcome its guilt trip in not overtly siding with the pro-democracy forces of Aung San Suu Kyi’s, National League for Democracy (NLD), was the indifferent and transactional experience that Myanmar’s brief tryst with democracy, afforded for India.

Contrary to initial expectations from yet another Mahatma Gandhi-inspired leader, Aung San Suu Kyi, she courted the Chinese openly and remained defiant on the contentious Rohingya Muslims issue. She oversaw possible genocidal actions of the Tatmadaw and refused to condemn the same, possibly to ingratiate herself with the still-powerful Junta in a country given to bloody and complex multi-ethnicity wars. But, neither her deliberate attempts of identification with the Buddhist majority nor her surprising attempts to keep the Junta on her right side were convincing enough, as the unsure and wary Junta moved-in and deposed her.

This led to India hemming and hawing in the initial stages without adopting a decisive stand and its diplomatese was mealy-mouthed, “India has always been steadfast in its support to the process of democratic transition in Myanmar. We believe that the rule of law and the democratic process must be upheld”, stopping well short on ‘condemning’ the Junta take over. While India’s official language was certainly more tick-in-the-box in terms of the necessary platitudes, unlike the Chinese, who were content to ‘note the developments’ and quickly dismiss the developments as ‘internal affairs’ of Myanmar.

Noting China’s cold indifference, the other neighbours like Cambodia and Thailand followed suit and detached themselves of any concern with the rote ‘internal affairs’ line. Geneva-based United Nations Human Rights Council’s resolution that ‘strongly deplored’ the Junta move was met with Russia, China, Venezuela and Bolivia dissociating themselves from the resolution on the grounds that external pressures could not be exerted onto a sovereign nation!

The fissures were apparent and the global ‘bloc’ politics ensued in earnest and the Myanmar Junta found its natural anchorage and supporters. Soon, the writing was on the wall and the Junta was going nowhere, and it decided to take on the protests, head-on.

Delhi had to take a decision quickly and carve out a optimum stand for itself – while it couldn’t risk offending the dug-in Junta outrightly like the US-EU had done (there was simply too much at stake given the border contiguity and the North Eastern insurgency angle), it couldn’t possibly go the Chinese route, either.

The Chinese gambit of overplaying the Junta hand and support was backfiring with the pro-democracy protestors attacking Chinese factories and assets, in Myanmar. Perceptibly for the locals, China had backed the Junta take-over, even if the reality was more circumstantial. Meanwhile, India was seemingly maintaining strategic ambiguity in dealing with the Junta. India was ignoring contextual cues of democratic derailment and leaving space for multiple interpretations that were cutting both sides, in favour of the Junta and that of the pro-democracy forces.

However, the inevitability of the ground situation soon made Delhi take a calculated optical change – the resident Indian Defence Attaché participated in the ‘Armed Forces Day’, along with representatives from Bangladesh, China, Pakistan, Russia, Thailand, Vietnam and Laos. Ostensibly a simple ‘protocol’ move as opposed to endorsing the Junta take-over, the import of Delhi’s decision could not be lost on anyone, least of all on the Junta.

Now that Delhi has decided to engage the Tatmadaw in a ‘peaceful manner’ with a ‘calibrated and nuanced approach’ – the die is cast, as far as expectation of India pressurizing the Junta are concerned. Beyond Aung San Suu Kyi’s bland experience and memories, India has accounted for its own vexed situation with China making inroads in the neighbourhood, as also, the strategic and economic stakes in Myanmar.

It is an unusual punt from India, and it could diminish Delhi’s historical and moral stand on championing democracy. This is especially worrisome considering that the vast majority of people in Myanmar would still rather have a civilian government as opposed to the Junta, and therefore questions abound on how long the Junta could hold on?

It could also lead to some awkward questions on India’s conduct, acquiescence’s and compromises in Myanmar, but for now, perhaps India has been forced to take a neutralist position that perhaps appeases none, but importantly, offends no one either. The Chinese have taken a decidedly riskier and potentially a high-gain-high-loss stratagem. For Myanmar itself, the genealogical fears of a totalitarian state are up and running. 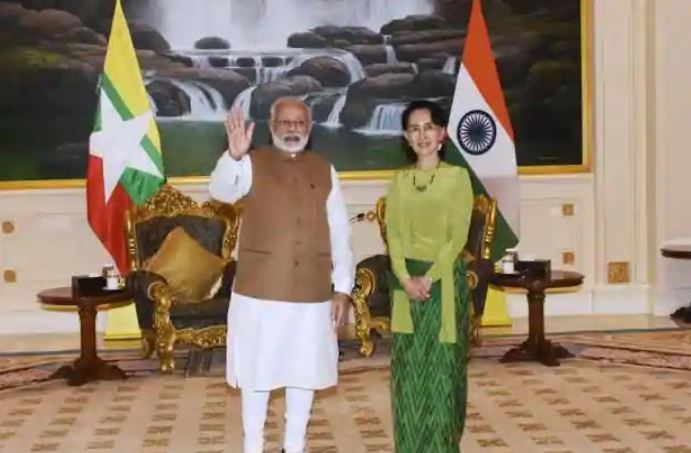