The ongoing Bengal Assembly election is being billed as the ‘mother of all state elections’ for several reasons. Never in the past have so many top Central leaders from Delhi – including PM, Home Minister and Defence Minister - addressed so many election meetings in Bengal, inviting the title of ‘helicopter daily passengers’ from Delhi.

First, for the BJP, Bengal is the proverbial last frontier yet to be conquered. Till 2021, it was almost unthinkable that a party which is traditionally perceived by the average Bengali to be a party of ‘Hindi-speaking non-Bengali vegetarians’ could assemble several lakhs of people chanting ‘Jai Shri Ram’ on the Brigade Parade ground of Kolkata which has been a bastion of first the CPI-M and then the All India Trinamul Congress.

So, the BJP forming a government on its own, or as part of a coalition in Bengal - though seem as unlikely in 2021 - is no longer considered impossible.

Second, with the decline of the Congress party, TMC supremo Mamata Banerjee has been steadily rising as the most important regional leader opposing the BJP (though at one time TMC was a part of NDA). The TMC has emerged as the second largest opposition party in Parliament. So, defeating TMC and Mamata Banerjee in Bengal will constitute a giant step for BJP towards its goal of ‘one country, one party, and one leader’.

Third, though Bengal had seen one of the bloodiest Hindu-Muslim massacres before and immediately after Indian independence, all the major political parties - Congress, CPI-M and then TMC - that have ruled Bengal since then have broadly subscribed to the Nehruvian idea of secularism. Hence, the conquest of Bengal by the BJP with its version of Hindutva would be a big ideological shift in Bengal and an important pan-Indian victory for the BJP ideology.

What are the major electoral issues and strategies of the two major rivals – TMC and BJP – with the Congress-Left-Indian Secular Front (a new political party floated by a firebrand Muslim cleric) as a minor third player?

Both BJP and the Third Front have been mainly focusing on the local level corruption by TMC leaders in the form of the so-called ‘Syndicate Raj’ and ‘cut-money culture’ (though these first started under the Left Front rule and have reached new heights under the TMC regime) with the promise of a corruption-free administration.

However, the personal image of Mamata Banerjee has remained mostly untarnished – except to the extent it is sullied by the corruption charges (yet unproven) leveled against her nephew, a TMC MP.

The BJP is further training its guns on the so-called policy of ‘appeasement of minorities’ by Banerjee. And insists that this policy is responsible for the illegal infiltration (of Muslims) from Bangladesh and the alleged higher rate of growth of Muslims in the state that will reduce the Hindus to a minority, endangering their identity and culture. Irrespective of facts and figures, there is a significant section of educated Bengalis (I know of IAS officers, professors, doctors, lawyers) who believes all this as many of their forefathers were Hindu refugees forced to flee from East Pakistan, leaving everything behind.. The latent anti-Muslim feelings have been ignited by the BJP narrative.

There is the further allegation by the BJP that the Trinamul Congress has not allowed Bengal to get the benefits of central schemes like Ayushman Bharat and PM-Kissan in order to prevent the Modi government from getting the credit for such welfare schemes. As a corollary, the BJP is emphasizing the benefits of ‘double engine’- one party rule at both state and centre - which it claims will facilitate greater resources for the development and welfare of the state.

Both the rival parties have projected all government welfare schemes as ‘gifts’ from either Modi or Didi, rather than as rights/entitlements of citizens, in order to get an electoral advantage over the rival.

TMC, on its part, is highlighting the dangers of communal polarization if BJP comes to power. The party is appealing to the Bengali cultural and linguistic heritage by characterizing all the Hindi-speaking BJP leaders (managing the Bengal election campaign) as ‘outsiders’ with no connection to Bengal and its cultural heritage.

The BJP has been trying hard to blunt this attack by incorporating Bengali icons like Tagore, Bankim Chandra Chatterjee, Netaji Subhas Bose, Vivekananda, Iswarchandra Vidyasagar and revolutionaries such as Khudiram Bose in its campaign. But these issues mostly concern only the Bengali educated middle class.

To capture the much larger number of the lower middle class and poor voters - especially in the SC, ST and OBC categories - both parties are promising an array of welfare schemes, specially targeted at these sections and involving huge budgetary expense.

For example, the TMC has announced a yearly handout of Rs 6,000 for each family which will be doubled for SC/ST families.This is in addition to a Swastha Sathi card for all families covering 5 lakh rupees of annual hospitalization expense (while BJP’s Ayusman Bharat is only for poor households) and 10 lakh rupees of state-guaranteed credit card for financing college education of children from poor families. BJP, on its part, has promised things like 200 units of free electricity and handsome cash grants to school students at different stages.

The wooing Motuas (a group of lower caste Hindu refugees from East Bengal with a significant presence in a couple of districts in West Bengal) by both parties is particularly interesting. In the earlier elections, the TMC was able to garner this vote bank by giving prominence to the Motua leaders.

But, this time, the BJP has stolen the show by fielding a larger number of Motua candidates and above all, by promising them preferential citizenship, despite enforcing CAA and NRC to weed out illegal infiltrators. The Prime Minister has even gone to the extent of visiting the birthplace of the original Motua gurus in Bangladesh to pay respects.

TMC is afraid (while BJP is happy) that, even if the Third Front may not win many seats, they may divert a significant part of the Muslim votes which traditionally had gone to its candidates earlier.

Both parties have chosen a large number of celebrities (film and TV stars, sportspersons) as candidates, though here TMC has been able to capture a larger number of celebs with bigger star value. BJP is trying to neutralize the star value deficit by using Mithun Chakrabarty (a Bengali all-India film hero, though past his prime) as a star campaigner. The win by a large number of celebrities under TMC banner (with no previous political experience) in the past has lent credibility to this strategy in Bengal.

The most important immediate factor influencing the electoral outcomes, however, has nothing to do with ideology. It is defection, before the elections, by a large number of influential leaders from TMC to BJP, the two most prominent being Mukul Roy (the main organization man of the TMC) and Subhendu Adhikary (the main force behind the Nandigram Land Movement that brought Mamata Banerjee to power).

Many of these leaders were already under investigation by Central agencies like CBI, ED and IT. The defections have been engineered by BJP by using both ‘carrots’ (promising better posts in terms of power and perks, withdrawing/slowing down ongoing cases against them) and ‘sticks’. Sadly, this shows that corruption charges (like benefiting from Sarada chit fund scandal or accepting cash bribes caught on tape) are not considered an electoral liability in India so long as the tainted leaders are on the right side of the political power equation.

Apart from raising serious doubts about the promise of corruption-free administration, this has created a great deal of animosity between the old party workers and the new entrants to the BJP, adversely affecting the unity and morale of the cadres.

Another ‘push’ factor behind defections has been the quick rise of Abhisek Banerjee, the young nephew of the Chief Minister , as the virtual second- in-command of TMC who, along with his chosen few, is increasingly controlling the levers of power and patronage of the party. This has created resentment among the older leaders with higher ambitions.

In addition, other things remaining the same, the bigger size of the election kitty and the control over the Central institutions - including the Central Election Commission, the Central police and para-military forces deployed to oversees the polls, - give BJP an advantage over the TMC in the Assembly elections. Just as the TMC enjoyed a similar advantage over rival political parties in the municipal and panchayat elections by having the State Election Commission and the local administration and police under its control.

Above all, the typical anti-incumbency factor is inducing some voters to give the BJP a chance, the argument being that they had given similar opportunities to the Left Front for more than four decades and then the TMC for another two decades. These voters wanting a ‘change’ do not necessarily subscribe all the way to BJP’s hyper- nationalist Hindutva philosophy.

It is also a fact that development issues like creating an investment friendly climate, attracting industries and creating jobs find less traction amongst the voters, relative to announcement of handouts of various types by all political parties. This may be because the voters have lost faith in the will or the ability of the political parties to deliver on their development/job promises. So, they have learnt to settle for immediate benefits.

In fact, even if new jobs are created, there is less certainty that poor voters (with inadequate education and skills) will get a job, compared to the certainty of availing announced handouts.

Finally, in the process of intense electoral competition, the supposed differences between the two major parties are being rapidly narrowed. To get rid of her so-called pro-Muslim bias Mamata Banerjee is now openly declaring that she is a bigger Hindu than the BJP leaders in that she is a Brahmin of the Sandilya gotra who can recite lengthy mantras worshipping Hindu Gods and Goddesses better than the BJP leaders.

She has also announced allowances to Hindu purohits at par with imams. The BJP, on the other hand, is refraining from pushing its hard Hindutva agenda in Bengal. Unlike in the Hindi heartland, the party has scrupulously avoided any hint of bringing ‘love jihad’ laws or banning cow slaughter or pushing for Hindi in education or suggesting what to eat, wear or whom to marry, if elected to power in Bengal.

This narrowing of differences - born out of necessity, if not of conviction – is the outcome of closely contested elections as well as the frequent crossing of floors by the leaders of both the parties. 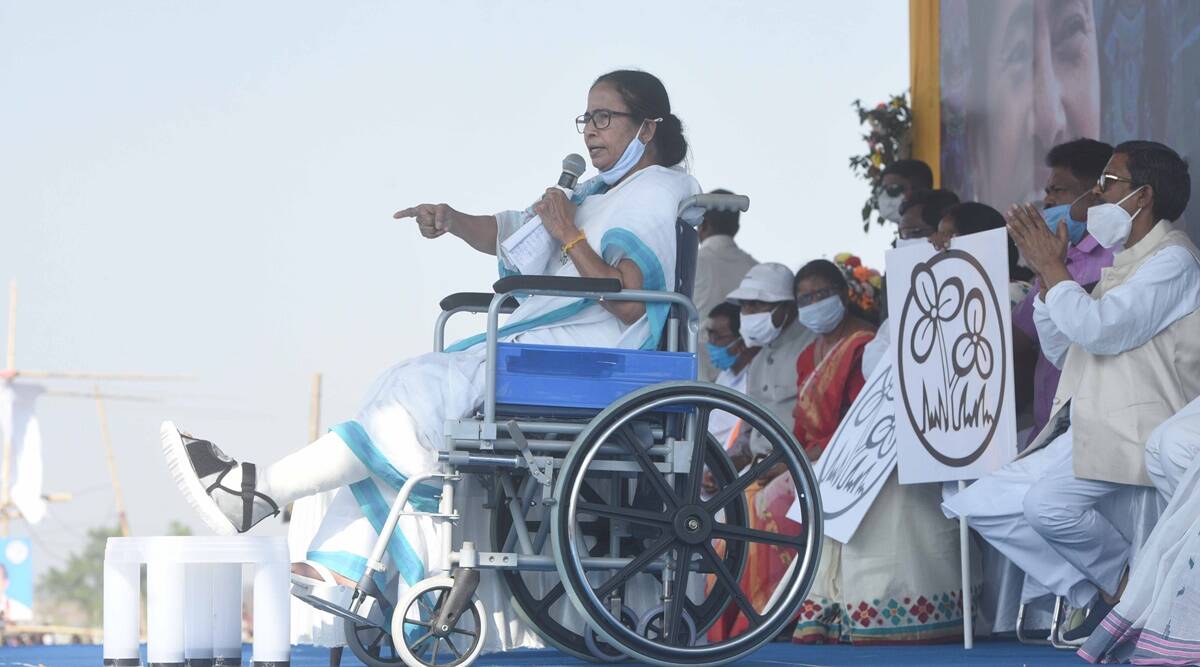