Reviving the ancient Art, not modern Science, of building boundaries

As if humanity is not completely overwhelmed by this term, a different though familiar practice of “Social Distancing” is currently being revisited by the faithful.

When the WHO prescribes social distancing, it refers to the practice of maintaining a greater than usual physical distance between people, in order to avoid infection during a pandemic.

In a reinterpretation with a logic of its own, recent trends seem to favour a falling back to the tried and tested practice of distancing: separation from neighbours and communities of social, religious or racial groups that are not classified as the “majority.”

Their shortfall in numbers permit identities to be undermined; histories, heritage and relics to be obliterated. Some, strategically weakened, may even be denied a drink of water at will, in the name of tradition.

These self-styled, variant behaviour patterns are not so “novel.” Someplace else the acts could be labelled hate crimes or bias crimes; not here. We may declare them justifiable historical facts, though without the requisite supportive evidence.

(For the sake of a single drop, the rain bird suffers in pain)

Having practiced the art of social distancing over centuries, structuring layer upon horizontal layer, from the brahmin to the butcher, slipping back into old patterns can come easy,

It took none other than a Guru called Nanak to elevate Sadhna butcher to the stature of a Saint while his solo verse was incorporated in Guru Granth Sahib.

Sadhna was perhaps a Chatrik himself. Chatrik or Chatak are a family of discerning songbirds that pine for rain water, or else endure their thirst. This attribute is gifted to them by poets in mythology, including Kalidasa in Meghdoota. Social distancing may well have been this poet-butcher’s muse, in his longing for integration and acceptance.

Sadhna travelled to holy shrines through North India, much like the one where nine centuries later, (or a month ago), 14 year old Asif was assaulted for being a naïve chatrik.

No he wasn’t asking for Ganga Jal from Hari ka Dwar, nor for nectar of Amrit from Harmandar Sahib, or even holy Zamzam water from Mecca’s mysteriously eternal pure supply - a service all belief systems consider commendable. His crime: inability to read the signboard outside Dasna temple, Ghaziabad.

As echo chambers resonated in agreement, over 150 temples in Dehradun went a step further, warning all non-Hindus to keep away. Freshly painted signage announcing these New Rules is already up on display.

Pathway to the Char Dhams, Uttarakhand’s temples will contact-trace tourists, travellers, scholars of archeology and architecture and multi-faith believers, before permitting entry.

The state may sacrifice tourism revenue, though in compensation, disempowered youth of Hindu Yuva Vani who have undertaken this sewa of ensuring display of revised signboards, will remain occupied, perhaps fulfilled with a new sense of purpose.

“Hum Mandir Nahi Jayenge” says Asif from the safety of his containment zone, recovering from injuries he was subjected to. His resolution sounds much like an additional refrain to poet Varun Grover’s year-old battle cry against CAA laws: “Hum Kagaz Nahin Dikhanyengey.”

Ill-treating a parched child worker as a whipping boy, his tormentor, a sewadar at the temple in Ghaziabad, applied a deterrent strategy that adult enemy soldiers, war criminals and lifers are not subjected to. For this, he was charged for “creating disaffection”, and granted bail.

Was this denial of drinking water, widely considered a divine service, a lost opportunity to redeem one’s mistakes as prescribed in scriptures? Could a “shahi snaan” or royal dip in holy waters reverse the damage?

Defending the attack on an underage worker on account of his name, the head priest failed to uphold the name of the temple organization, “Hindu Swabhiman.” Nor could he bring glory to his self-rechristened title of Saraswati, or 'the flowing one'; symbol of a river deity evoking refinement, knowledge, and wisdom.

Further emboldened by his public defence, the priest proceeded to make offensive comments against the Prophet and Islam, as the Chief Guest at the Mecca of the capital city’s media, Delhi Press Club.

As if in solidarity, a news item simultaneously reported a notice served to Delhi Waqt Board to vacate their legally-owned mosque, Lal Mazjid on Lodi Road. The Board may be compelled to hand over possession of its premises, which include a Sufi pir’s last resting place. The reason for assigning history to a rubble: building barracks for CRPF. Construction has begun and wrecking crews couldn’t be far behind.

These crowbar-wielding professionals, along with temple billboard painters, are a category of “migrant workers” who may not feel anxious about impending pandemic-related unemployment.

Last week, a video witnessed a Sai Baba statue being demolished with a metal rod in the heart of the capital, just on the off-chance the Saint may have been a Muslim.

In a possible encore edition and dreaded sequel to the Babri mosque dispute, the local court in Varanasi set up an inquiry into the claim that the Gyanvapi mosque in this holy city is built upon temple premises.

This, in defiance of the Places of Worship Act, 1961, which made an exception for reconstruction solely in the case of the Babri Mosque, when it put a freeze on the status of places of worship as they were on August 15, 1947.

Archeologists must determine if the existing shrine, “The Well of Knowledge”, is superimposed upon a “temple that existed since time immemorial.” It is said that nearly 300 sites have been identified for demolition in UP.

How much deeper can we dig? How far back in the story of time can we go? Where is substantive evidence recorded regarding the age of edifices and the motivations of its constructors?

Are we becoming a nation of chatriks, parched for retracted freedoms? In their eagerness to add fresh momentum to the well-worn purity-pollution theory, do practitioners overlook the earning of promised high karma they believe in, for practicing “punya” or sewa?

Why is the shared heritage of humanity in conflict with current trends of social distancing from history?

In yet another recent case of recurring drumbeating, sections of the Khuda Bakhsh Oriental Library are being targeted as possible new victims of the demolition drive. The state government intends to construct an elevated flyover, slicing apart the Lord Curzon Reading Room and the front façade of this heritage site. To retain the structure holistically, INTACH and the library authorities have proposed an alternate route to divert growing traffic.

This, the pride of Patna, inaugurated in 1891, is home to over 2100 manuscripts in Persian, Pashto, Urdu, Turkish and Arabic, as well as original Mughal miniatures. The National Mission for Manuscripts has recognized its manuscripts with “unique heritage value”, designating them ‘Manuscript Treasures of India’.

Knowledge, values, traditions and memories of ancestors lie here, in custody for posterity. History and its scholars need not be distanced further, either from facts or from their own roots.

So that Khuda Baksh, the Creator’s Gift, survives, we the parched people may recall the Dua enshrined within the verse and vision of Iranian poet Sohrab Sepehri:

Let's not muddy the water.
Perhaps this flowing stream runs
by the foot of a poplar tree
and eases some heart's grief.
A dervish, perhaps,
has moistened his crust in it.

Meera Dewan is an award-winning filmmaker. 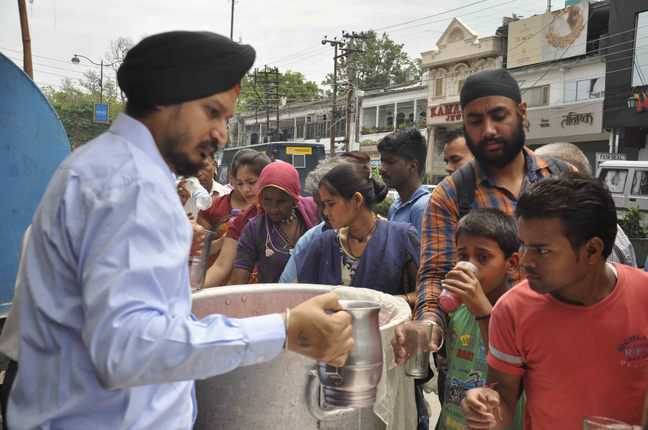