A cruel and debased reality

The last time India lost so many was at partition, when a million died at the altar of irreconcilable political passions and divisions.

Institute for Health Metrics and Evaluation forewarns of yet another million who might perish in the ensuing Covid pandemic with crippling medical shortages, just before the 75th anniversary of Independence, for which over Rs 20,000 crore are still being insisted upon to make a new parliament building, museums and residences on a 3km stretch of land.

Something seemed amiss then, something seems amiss now, i.e. priorities. ‘Abandoned’ is the dominant sense of the confused and concerned citizenry, that prevailed then, and that prevails now.

Amidst the horrific bloodlust of partition, it was only the moral (not political) leadership of Mohandas Karamchand Gandhi, who could look at the people fromthe others perspective and feel ‘their’ pain. His personal conduct and choice of words were meant to deliberately ‘include’, assuage and heal a wounded moment in history, and the politics of ‘division’ was firmly disallowed.

The elevated ‘Mahatma’ realised that tragedies beg for unity, empathy and compassion – not the spin-doctoring of manufactured positivity, distractions and optimism. For him, tragedies were too serious to be trivialised, dog-whistled or occasions for pretences of ‘business-as-usual’.

Gandhi’s moral code required the honest acceptance of the truth in situation, outreach and prioritisation. As Nehru’s midnight stir of ‘tryst with destiny’ became the national lodestar of lofty aspirations, a more cruel and debased reality played out amongst the fleeing masses in the recently vivisected land –

Gandhi spent that time in a dilapidated hut of a Muslim in a Hindu-dominated area, to send a message of empathy to the vulnerable. Gandhi’s India, unlike Jinnah’s Pakistan, could not accept religion as a basis of nationhood.

Axiomatically, many at the exact opposite of Jinnah’s religious preferences, actually believed in the narrow, bigoted and exclusivist formula of religion as a basis of nationhood. Thankfully India rejected that smallness-of spirit and walked a very different narrative and emotion hereinafter, whereas Pakistan got sucked into the vortex of hate and ‘divides’, soon after.

That crucial choice was to naturally beget leadership like Ayub, Yahya, Bhutto, Zia-ul-Haq etc., whereas this side consequentially had the genteel statesmanship of Nehru, Narsimha Rao, Vajpayee, Manmohan Singh and others.

The power of inclusive leadership was such that despite the unprecedented mayhem, bloodshed and violence in some other places, nearly half a million ‘Indians’ of both religious communities attended his prayer meet on Eid. When heartless politics had failed the civilisational land of antiquity, temporarily – one leader put humanity and empathy over all concerns, and therefore only he was reserved the title of ‘Mahatma’.

Throughout history great leaders have measured the consequences of their moves, words and priorities, especially at moments of extreme vulnerability, such that the undeniable faultlines (social schism and fears) do not additionally add to the burden of the uncontrollable.

On the contrary, leaders like Gandhi harnessed ‘people’s power’ positively for transformational betterment, well beyond the petty considerations of showmanship, partisanship and electoral politics.

Today, as governance fails, ‘systems’ fail, institutions fail, godmen of all faiths fail, promises fail – it is only individual humanity and empathy, that provides succour. As gut-wrenching scenes of patients and their families begging for oxygen with folded hands as they see the lives of their loved ones snatched out – to even suggest words like ‘optimism’, ‘vested agenda’, ‘enemies’, ‘naysayers’, ‘anti-national’, ‘presstitute’ etc. in a bid to obfuscate the reality, is inhumane, inconsiderate and morally callous.

Only the blind at heart and dead of the soul, can see, seek or beseech distractions. There is no Gandhi on the horizon and the only working ‘atma’ that exists now, is the residual soul within oneself – the one that frantically and desperately tries to arrange oxygen, ICU beds, medicines for people they do not even know or will ever know!

That person who risks his/her own life as indeed his loved ones for that proverbial ‘other’, that doctor who refuses to rest, that policeman who stands tall at unearthly hours, that ambulance driver who chooses to not look at the watch – those faceless, nameless and unsung ‘Indians’ who truly realise what is at stake, without a context or an agenda.

Anecdotal stories of the old man in Nagpur who volunteered to give his ICU-bed to a younger person who had ‘not yet lived his life’, those adhering to different faiths but willingly conducting the final rites for others who had perished, the Gurudwaras whose langars and generosity never stops or discriminates – all acts of putting humanity and empathy, above reckless politics and empty-posturing.

German Chancellor Angela Merkel, a former scientist with a doctorate in quantum chemistry, a wise leader who insisted on science in crisis, exposed those who rely on ‘fact-denying populism’ when she sounded almost Gandhian with, ‘we are seeing at the moment that the pandemic can’t be fought with lies and disinformation, and neither can it be with hatred and agitation’.

Another sobering and soothing leadership example in these disturbing times was the young Prime Minister of New Zealand, Jacinda Arden, who shunned a partisan blame-game, refused to peddle in misinformation and repeatedly invoked ‘kindness’ (even as she remained most decisive, consistent and assertive in taking mitigation steps) to tackle the pandemic.

Jacinda Arden voluntarily took a 20% pay cut to ‘close the gap’ with those impacted by the pandemic, as she too in a Gandhian cue chose not to preach but stand visibly amongst the disaffected and the distraught.

Today, many good Samaritans are individually or collectively expressing their humanity silently but surely, away from the glare of the lens, material gratification or political considerations.

Sadly, despite the unbelievable loss from all human angles, some still continue with political contextualisations, whataboutery, distractions and preferences that ought to be relegated to the dustbins of crying shame. Tellingly, when Gandhi was shot dead by hatred above all, the eloquent Sarojini Naidu had pleaded to a shaken country on the radio, ‘My father, do not rest. Do not allow us to rest’.

Thankfully, the soul of Gandhi is still alive in many of the citizenry and it has not rested since, and it will only be that lofty spirit if invoked, reflected and never-forgotten that will see the end of these dispiriting times, when the pandemic unleashes its fury.

Gandhi’s formula was simple – conscience, humanity and empathy, above all. Even a Rs 20,000-crore investment to spruce up a 3km pathway will be insignificant to celebrate the diamond jubilee of India’s independence, if we cannot overcome the divisive instincts of politicisation that beset partition.

India needs to heal, re-prioritise and re-develop a culture of empathy and humanity, especially in a tragedy.

The partition of land and people, much like the pandemic, leads to unavoidable disarray, tragedy and loss – but every time such inevitabilities happen, you need a ‘Mahatma Gandhi’ to emerge and this time it has only been that empathetic ‘Indian’, who has put humanity above all, who has exemplified Gandhi in a tragedy. 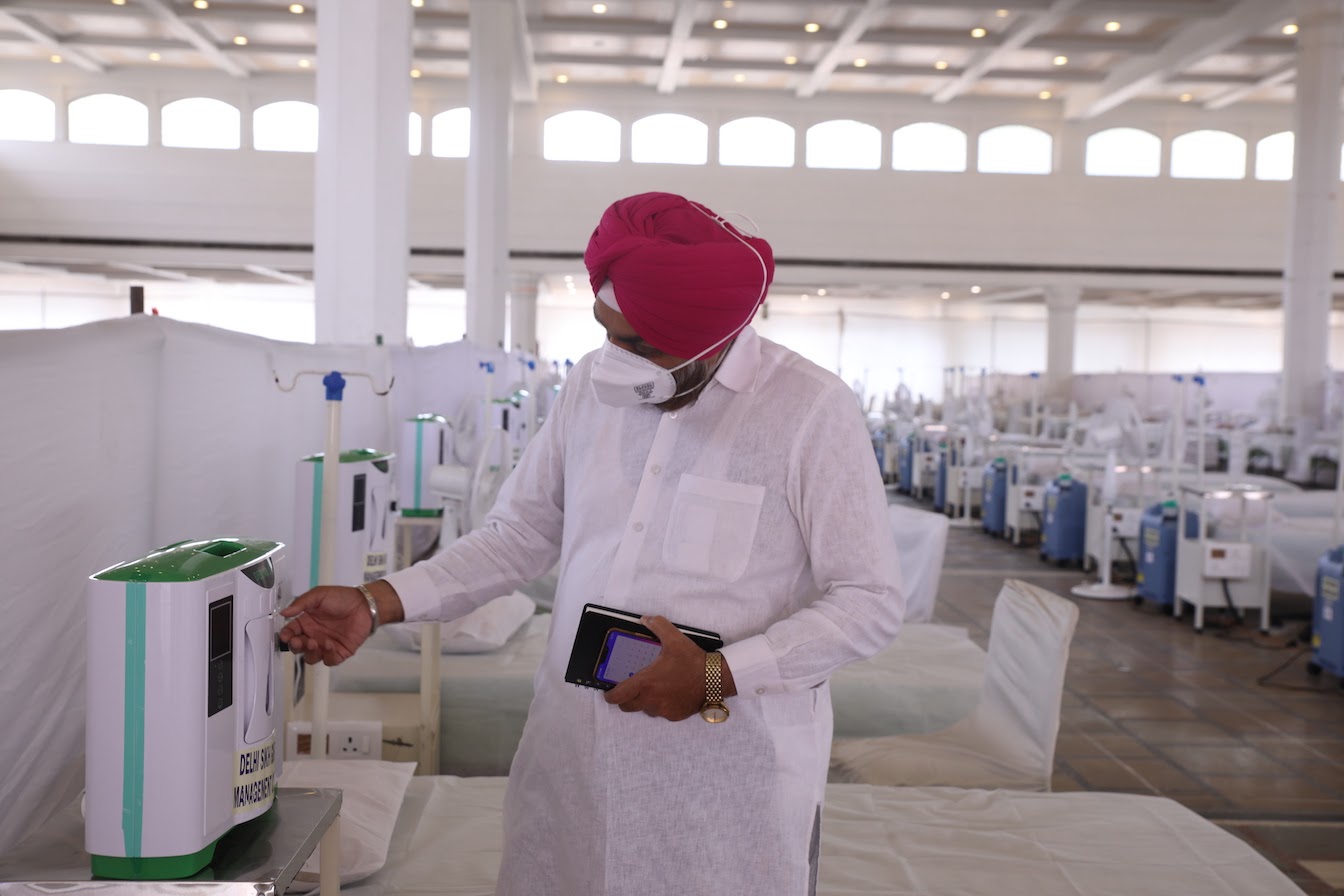