The Sun Doesn't Just Rise, It Explodes in Puranikoti !

Away from the madding crowd

The sun doesn't just rise in my village of Puranikoti ( 7000 feet, pop 190 ) - it explodes. One moment the eastern horizon is a bluish hue faintly tinged with pink, the next there is an burst of gold over the Theog ridge-line, at the center of which is a searing circle of light.

Somehow, this dazzling sphere always reminds of me the massive headlight beam of the Bullet engines of my youth, rounding the last curve before Kanpur station and bathing me in a sudden glare, drilling its burning light into my very soul. It's a childhood moment recreated in Puranikoti every morning. One is reminded also of the immortal description of the rising sun in The Rubaiyat of Omar Khayam:

" And lo! The hunter of the east has caught
The Sultan's turret in a noose of light!" 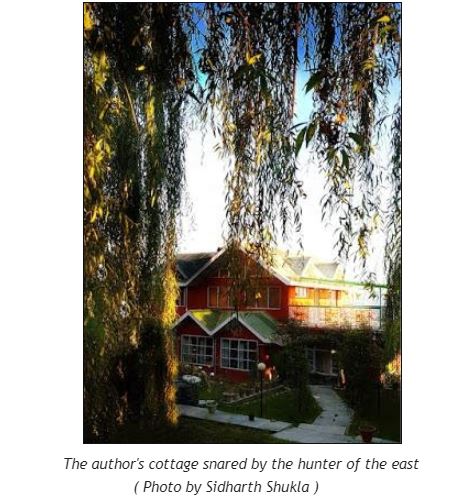 There are, unfortunately, no turrets in Puranikoti, and no Sultans either; just four Additional Chief Secretaries, two already consigned to history and two still in harness, hoping to lasso the Chief Secretary's chair before the sun rises too often.

I'm usually out of my house by 6.00AM for my morning walk through the dense forests of deodar, blue pine and oak, come winter, summer, monsoon or lockdown. There is an indescribable magic in the way the forest comes to life, after a cold night, under the benediction of the warming rays. I always marvel at the way the hidden avian orchestra tunes up, individual calls to begin with, gradually merging into a happy, almost Wagnerian crescendo: the cooing of the wood pigeons, the convoluted melody of the whistling thrush, the rat-a-tat-tat of the woodpecker, the chi-chi-chi of the Himalayan magpie, the haunting aria of the "koel".

One never sees them, of course, for theirs is a different world, and it's perhaps better that way. Occasionally, however, one can spot a jungle fowl or a koklash sunning itself in a patch of sunlight on the forest floor or scurrying across the road into the undergrowth. An hour of this is enough to make one forget the sordid world we humans inhabit, with all our diseases of the mind, body and soul.

I'm back for a cup of tea on our terrace by 7.00, and for the first scolding of the day. No, it's not by Neerja- she gave up many years ago when she discovered that, for a bureaucrat, no admonition counts unless it is given in writing and begins with " The Governor is pleased to inform you....." My first rebuke of the day is administered by a termagent of a " bul-bul" which has taken up unauthorised residence in my weeping willows and insists on a B+B arrangement.

She arrives on the dot, cursing all the way, and demands her breakfast pronto. I initially tried giving her bird seed and bajra/ rice grains but she rejected them like a fussy dowager. She prefers biscuits( Parle G, the company will be happy to note), crisp rusk toast and my own favourite " namak paras". What Bul-bul wants Bul-Bul gets, or I don't get my morning cuppa! She sometimes brings along a friend or two if she feels the snack is up to the mark.

The sparrows and tits come in her wake, after a five minute conference call among themselves, and oust the bul-bul by the sheer weight of numbers, in true democratic fashion.


There is another magic which the warming rays of the sun work on the trees and plants around my house. The gentle breeze gradually gets suffused by a medley of fragrance and subtle smells, all mingling into one indescribable bouquet which no incense stick or air purifier can hope to match. That's because it does not have just one source, it is the breath of deodar, pine, oak, rose, hawthorn, apple blossom, wild daisy, hibiscus, hydrangia, willow, horse chestnut, morning glory and even the grass which I allow to grow wild.

There is just no way I can pin down this scent and its components, just as one cannot describe what constitutes love or faith. You just know what it is, and you savour it , be grateful that you were allowed to experience it and to share it with the creatures of nature who are actually its true owners.. There is one man- made scent in this mix, however- the smell of burning wood. It is the contribution of Suresh, the village carpenter, who lights up his " hamam" or wooden stove sharp at eight o' clock every morning to heat the water for his ablutions.

Since his hut is situated just above my cottage the smoke drifts down to me. But I don't mind at all- the smell mixes well with the fragrance of nature, and it reminds me of my trekking days, nights rather, getting to know better my friends ( and a certain Old Monk) before roaring camp fires!

The morning traffic begins at about the same time. The first mover is Darshana Devi, a matriarch who lives with a large joint family about half a kilometer away. She has extensive fields of vegetable crops and a herd of seven cows and one mean looking bull. Promptly at eight o'clock the herd is driven to the forests above my village by either Darshana herself or one of her many daughters-in-law, its slow progress marked by the barking of the dogs in the various houses along its winding route.

The bovine will graze on the slopes below Wildflower Hall the whole day and return in the evening. They have the right of way because here cattle class IS the premium class ( as Mr. Shashi Tharoor will be happy to note!)

Half an hour later the twice-a-day HRTC bus arrives, on its way to Mashobra and Shimla. It is usually packed with school teachers, govt. employees and villagers who still nurture the fond hope that an application submitted in the HP Govt. Secretariat will get their long pending work done. They will, of course, be much wiser but sadder citizens on the return trip, but for the moment they are as chatty as my bul-bul and the sparrows.

I take the bus sometimes to go to Mashobra bazaar when even the local mice start giving my empty larder a miss. Or when Ms Sitharaman, our Finance Minister, announces that the economy is looking up, for then I know that the only thing looking up will be the fuel prices, and it's time to either join Darshana's cows or put one's trust in the HRTC.

The bus is followed by a few pick-ups taking the local vegetables to the subzi mandi in Shimla ( it's cauliflower these days), and by about nine o'clock our morning ritual is more or less over, and somnolence returns to Puranikoti. The sun has done its job here and can now move on to the great cities of the country. It is, after all, at the heart of our existence and determines the rhythm of life. Ernest Hemingway put it very well in DEATH IN THE AFTERNOON:

I'm fortunate, I guess, that the rising sun casts a long shadow in Puranikoti, even though I'm a small man. 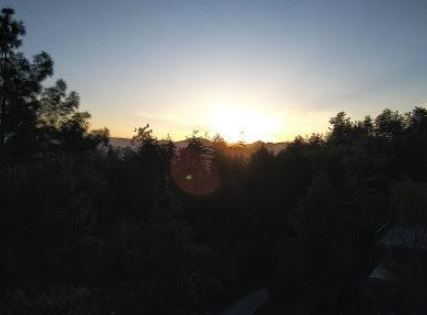