The Security Implications of NPR-NRC

Coronavirus SARS-Cov-2 stymied Government’s country-wide implementation of National Popular Register(NPR)-National Register of Citizens (NRC), starting April 1, 2020. However, the fear of NRC with Citizenship (Amendment) Act-2019 (CAA) on its back, remains. These fears are now overshadowed by deaths and suffering in the on-going brutal Covid second wave and an impending third wave.

Assam’s Supreme Court-monitored NPR-NRC exercise took 5-years and cost ₹1,220 crores. It found 1.9-million (6%) of 32.9-million people who applied for citizenship, as “illegal migrants”. They were unable to prove their citizenship for want of documents acceptable to officials.

Assam’s NRC completed on 31.08.2019, found that over 60% of illegal migrants were Hindus. Significantly, 100 days later government introduced CAA-2019 as a Bill, passing it into law on 12.12.2019. Country-wide protests against CAA-2019 and government’s ham-fisted response gained national attention.

Even though Assam voted the BJP into power despite the earlier protests, it is tragic that even while people are in the grip of the Covid pandemic, Assam CM H.B.Sarma announced intention to re-do Assam’s NRC. This has re-kindled fears not only of further exclusions, but about having to once again go through the traumatic process of proving their citizenship with documentation.

Illegal migrants living inside India is a worrying, long-standing reality dating back to the 1950s. This is so especially in several border states. Over decades, successive governments of different political persuasions have amended the Citizenship legislation several times, but have only complicated the issue. Together, the centre and states have failed to identify illegal migrants. These failures have compounded the adverse social effects.

According to the Citizenship Act 1955, as amended several times, with Rules notified several times, a National Population Register (NPR) of all residents will be created as a database, for preparing a National Register of Citizens (NRC). Apart from transients with valid passport-visa, residents whose names are not found in NRC would be treated as illegal migrants and put into Detention Centres.

The public fears concerning NPR-NRC exacerbate the sense of individual and social insecurity, with consequent social tensions and violence. This threatens social stability, and constitutes a national concern both for internal and external security. Social insecurity and social strife can only help India’s hostile neighbours.

It is therefore necessary to re-visit the NPR-NRC process, and the laws and rules which govern them, to understand their effect on people and societies, and their national security repercussions.

The process of creation of NRC is according to the Citizenship (Registration of Citizens and Issue of National Identity Cards) Rules, 2003. The method of enumeration is laid down in “Instruction Manual for Updation of National Population Register (NPR), 2020”.

Doubt regarding citizenship of an individual can be because of the Local Registrar’s assessment of documents produced, or because of an objection by a third party against inclusion of his/her name. While a “doubtful” citizen has provision of appeal, perversely, the Rules actually invite objections [Rule 4(6)] to inclusion of a name, even privileging an objector as an “aggrieved person” [Rule 4(7)] with opportunity to appeal against the appeal bythe “doubtful” citizen.

Population is a dynamic entity. Hence, NPR needs continuous updation for fresh entries (births), deletions (death, etc.), change of name/status/address, move into and out of the state, etc.

With NPR being an additional responsibility for local officials, both authenticity of updation/verification and their regular duties will suffer. Government appears not to have recognised this. The “out-sourcing” solution for data acquisition/ updation/ verification, as done for Aadhaar, would be unacceptable. There appears to be a lack of thinking-through in the NPR-NRC process.

Birth Certificate is the primary document to prove citizenship. According to 2015-16 National Family Health Survey (NFHS-4), 62.3% of children under 5-years age had birth certificates. The absolute numbers of 37.7% who did not, are in millions.

A Press Information Bureau statement of December 20, 2019, concerning NRC, reads: “If you do not have the details of your birth, then you will have to provide the same details about your parents”. Thus, millions of today’s adults, the children of yesteryears, do not have birth certificates. Anyone who knows how governments function, will agree that touts, middlemen are sure to make fortunes in providing Birth Certificates or connected documents.

The NPR-NRC process puts the entire population to hardship and expense to obtain certificates, appear before government officials, etc., and undergo the mental tension of uncertainty until their names are confirmed as included in NRC. Lakhs of people will make multiple visits to distant towns, depleting their scarce personal finances for travel-stay-food-miscellaneousexpenses, and also lose income due absence from occupation/job.

This is besides the downstream effect on families, especially children, the loss of productivity and its effect on the economy, and the opportunity to touts and middlemen to “produce” documents acceptable to corruptible officials.

The NPR-NRC process, prone to error and misuse of official power, and violative of the dignity of the individual, puts all of India’s population to untold trouble, misery, expense and loss, to have his/her name included in NRC.

Undoubtedly, large numbers of people especially in some border states, are illegal migrants. They must certainly be identified and dealt with according to law.

However, the outcomes of the nation-wide NPR-NRC process will be seriously debilitating from the social and economic perspectives, from local through state to the national level, with extremely serious consequences for individuals. In order to identify illegal migrants, there is little justification to require the entire population to individually prove their citizenship, according to Rules which are loaded with infirmities.

One is reminded of Rabindranath Tagore’s amusing children’s story “Juta abishkar”. It is about a king who, instead of wearing footwear to keep his own feet clean, wanted his ministers to make his entire kingdom dust-free. The story demonstratesthat lack of understanding ofa problem leads to suggesting illogical and impractical solutions.

A police officer summoning the entire population of the mohalla to the station to prove their innocence regarding an illegality committed in that mohalla, in order to find the culprit, is similarly illogical and impractical.

The above examples demonstrate the illogic of the NPR-NRC process. Governments, with their administrative organization, public finance, intelligence capacity, police, etc., have both the onus and the means of detecting illegal residents. Instead, government uses the NPR-NRC process to shift its onus of proving illegality of residence of the few, onto the population.

The process obliges each individual of the entire population to prove that he/she is not an illegal migrant, based upon producing a piece of paper certified by an official, before other officials, all of unproven integrity. Even worse, the Rules encourage people to report with impunity on others for their exclusion from NRC.

Many millions of people of all ages will facing exclusion because of documentation deficit when NPR-NRC is implemented nation-wide.

Social tensions will intensify as millions jostle to procure documents which they do not possess, in order to satisfy officials with huge discretionary powers. Their success or failure will determine their identity as citizens or non-citizens with consequent effects on their progeny, livelihoods and property. The stakes are enormous for every individual.

Implementing NPR-NRC can rupture our social fabric. When social fabric suffers rupture, law and order situations multiply, requiring security forces deployment. Our experience with disruption of social fabric is not recent. The Indian Army has been deployed for internal security (IS) duties since 1950, because the political-bureaucratic-police trio declared entire states as “disturbed” continuously for decades, having failed to handle the situations created by their own mishandling.

If the NPR-NRC process is pressed country-wide, the proportion of the army deployed on IS duties may well increase due to increased social tensions, especially in border states. This will further deplete its strength committed to its primary role of defence against external aggression, to preserve national sovereignty and territorial integrity.

Millions of people whose names are excluded from NRC will be consigned to Detention Centres. According to CAA-2019, those who prove citizenship of country X, “shall not be treated as illegal migrant”. They can get Indian citizenship, provided three conditions are met:

#1. Country X is only Afghanistan, Bangladesh or Pakistan, no other, and

#3. Prove entry into India before 31 December 2014, and having lived inside India for 5-years.

While confined within Detention Centres, each detainee would need to prove that he/she is a citizen of country X. This would provide opportunity for middlemen to produce documents of “proof” to satisfy officials who excluded them from NRC. The fake-document industry and corruption will thrive. However, the three “and” conditions of CAA-2019 ensure that every Muslim in Detention Centres remains in detention.

The constitutionality of CAA-2019 has been challenged in the Hon’ble Supreme Court (HSC). At the last hearing in March 2020, HSC ruled that it needs to hear Government on the issue before taking a decision. Government is clearly in no hurry to present its defence of CAA-2019 before HSC. For an issue as serious as citizenship, that HSC has not seen fit to give Government a date by which to present its arguments, does not speak well for our apex judiciary.

The constitutionality of CAA-2019 apart, implementing NPR-NRC country-wide will have deleterious social, economic and security effects, which will haunt our country for decades.

Governments will spend money (public funds, if there is doubt) for upkeep of many millions in Detention Centres. Further, if Assam’s one-time NPR-NRC costing ₹1,220 crores and taking 5-years is indication, the cost-time and economic effect for 28 States and 8 UTs on an already floundering post-Covid economy will be disastrous.

It is doubtful whether the retrogressive social-financial-economic effects of NPR-NRC-CAA2019, or the logistics of NPR-NRC as a repetitive exercise like Census, have been considered by governments, or by the architects of the laws and rules.

State and central governments would do well to use their existing resources to identify, apprehend and deal with illegal migrants, under due process of law.

Funds thus saved will improve people’s quality of life when utilised for the long-neglected Health, Food, Agriculture, Welfare and Education sectors. Especially in present Covid-pandemic times, it will bring peace to our society.

Migration into India over the years was caused by social-economic-political factors obtaining in neighbouring countries.

Predicted rise in sea level due to Global Warming, could cause increased migration from neighbours, beginning in the not-too-distant future. State and central governments would need to consider this and strategize accordingly. 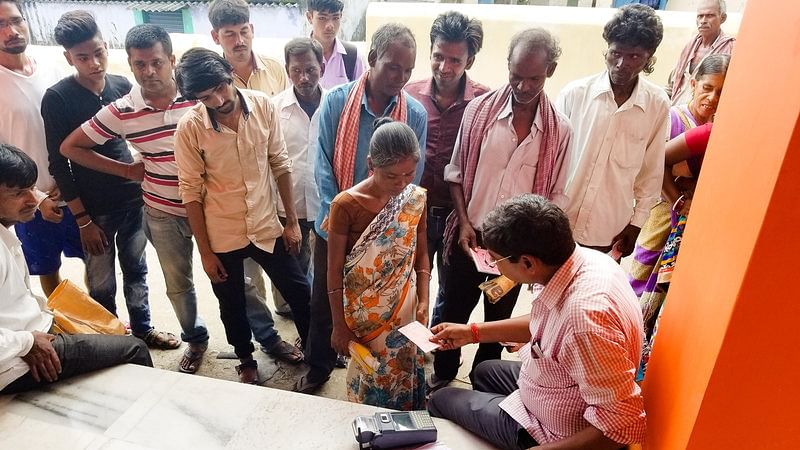