Lessons still to be learnt by the Left in Kerala

It’s the teachers who told us that if we work hard and with commitment, we will be rewarded with praise and promotions. Scores of students in Kerala must have learnt this lesson from Shailaja Teacher, the former Health Minister, who became an international heroine in 2020 for her intelligent handling of the global pandemic.

A year later, in the full glare of publicity, she has learnt a different lesson: that performance is not linked to reward, not at any rate in Kerala politics. It’s not her students, the people of the State, who have betrayed her. Voters have taken the lesson to heart; they continue to reward sterling performance with the highest accolades.

So much so, that in recent elections to the State legislative assembly, they abandoned their normal anti-incumbency instincts and returned the ruling leftist coalition and its star performer, Shailaja, back to power.

For decades, no political group has won the people’s support in successive ballots in Kerala. Yet, this difficult feat has been achieved by the CPI(M) led Left Democratic Front (LDF), which stopped just one seat less than a hundred in the 140 seat Assembly.

The verdict leaves no room for ambiguity. By awarding Shailaja Teacher, who steered the Health Ministry through the Covid crisis, a historic majority of over 60000 votes, the electorate has clearly trumpeted its approval of her performance.

What is odd is the behaviour of the ruling party. It had fought and routed both its traditional Congress rivals as well as the fledgling BJP menace (backed by the full power of the Central government) by touting the achievements of the last five years, particularly its performance during the devastating pandemic. And yet, it has replaced a high performing Cabinet (including the charismatic Health Minister) with a clutch of political novices, deliberately ignoring the plaudits and signals of voters.

Naturally, there has been a storm of protest in the press and on social media. But the comrades are unfazed. What is actually happening here? Speculation is rampant.

The Chief Minister has offered a somewhat lame explanation for his behavior. Kerala politics and society are in turmoil. Painful memories from the past have been unearthed, allegations of casteism and sexism raised and questions asked about dynastic succession in the Kerala CPI(M).

Since independence, Indian voters have resigned themselves to the nepotism that is the besetting sin of their political parties. The Congress is steeped in the dynastic mode at all levels; almost every political worker believes in the divine right of children and close relatives to inherit the mantle of political forbears.

Most other parties (the DMK and the Shiv Sena, for example) have also adopted the Congress model. So far, the Left alone seemed to have escaped the national curse. Is that too about to end?

As the dust around the campaign settled last month, Pinarayi Vijayan, the Kerala Chief Minister, opened the flood gates to a host of accusations by apparently passing the baton on to his son-in-law, who had not only been given a ticket in the election, but was also elevated to a seat in the Cabinet.

Social media exploded with rumours that he was being fast-tracked to Chief Ministership by overlooking senior contendors like Shailaja Teacher and Thomas Isaac, who have been put on the back burner after managing their ministries effectively during difficult days.

Such a radical departure from the political ethics of the CPI(M) could have been avoided. It is widely believed, however that the ageing Chief Minister is preparing to withdraw from active politics and was promoting the interests of a family member while still in office. The perception that dynastic politics has made a back door entry into the left bastion has dimmed the glow of the spectacular electoral triumph.

Exclusion of Shailaja from the Cabinet has also revived memories of another dark chapter from the past, the infamous Gowriamma episode of 1987. Media outlets had occasion to rehash that event when Gowriamma passed away at the ripe old age of 102, just days after the election results were out.

Memories of the casteism and sexism that destroyed the political career of the grande dame of Kerala politics are still fresh in our minds. The saga of her successful tenure as Revenue Minister of Kerala, the use of her name to recapture power in 1987 and her shameful replacement as Chief Ministerial candidate for purely casteist and sexist reasons has dominated her obituaries.

The truth universally acknowledged in Kerala today is that Gowriamma was excluded from Chief Ministership, because she belonged to the “wrong” caste, the backward caste of Ezhavas, whose numerical strength was essential to garner votes for the party, but who were not considered “forward” enough to occupy the Chief Ministerial seat. And also because the stag party within the Politburo could not stomach a woman Chief Minister.

This painful narrative, replayed in the press only very recently, has forced Malayalis of all shades, who believe that they are free of sexism and casteism, to face up to their own demons.

Today, neither the Left nor any of Kerala’s organisations of dominant caste groups has countered the Gowriamma reports or put out an alternative story. They know that it is futile to deny the shameful historical record of the treatment of Gowriamma.

The inevitable result of excluding Shailaja Teacher from ministership in the wake of the recent publicity around Gowriamma is to bring back those old allegations of casteism and sexism. No wonder that the media have been flooded with cartoons and memes portraying Shailaja as Gowriamma 2.

Certainly, the party has its own justification for the new-look Cabinet. The official explanation is the organizational rule that no MLA should have more than two terms in any office. But, no such regulation was ever disclosed in the run-up to the election. And, if such an internal guideline actually exists, why couldn’t it be reviewed, when the electorate has made its preferences known so overwhelmingly by ignoring its own tradition of changing governments at every election?

Supporters of the Left are making an effort to swallow Vijayan’s story. Does the party have perhaps a grand strategy in place to revive its chances all over the country, following the thumping victory in Kerala? We know that left Chief Ministers do not have the final say when a Cabinet is chosen or key policies announced.

Perhaps, the Politburo has plans in hand to exploit the Kerala success to wrest back the two States (West Bengal and Tripura) where its fortunes have touched the nadir. Maybe, blueprints will be prepared to use the newly elected novices to win back the youth vote, to make the party relevant to the unorganized sector and develop a vote bank in service industries, like information technology, which have fiercely resisted unionization.

But, even a left sympathizer like me must give up such idle dreams. Nothing on the Kerala horizon suggests the dawn of a fresh political strategy.

The blunders of today are merely the continuation of past mistakes, errors rooted in patriarchal mores and an outdated ideology. Which is blind to the individual’s longing for recognition and advancement, his response to incentives and market signals.

In the imaginary world of Communist thought, personal goals must be forever subsumed in the goals of the community. And party workers should fall into line without praise or preference. Not the ideal environment to promote zeal and political commitment. An environment in which other Shailaja Teachers could rise to the top of the party, secure in the knowledge that they will be valued and rewarded.

The Left needs a total makeover, altering not just electoral strategies, but also core attitudes towards workers and voters. We see something else instead: a party that has learnt nothing and forgotten nothing. Which will not respect the messages of voters or apply a teacher’s wise advice. But a party that resists change is doomed to failure. You are warned, comrades!


Renuka Viswanathan is retired from the Indian Administrative Service 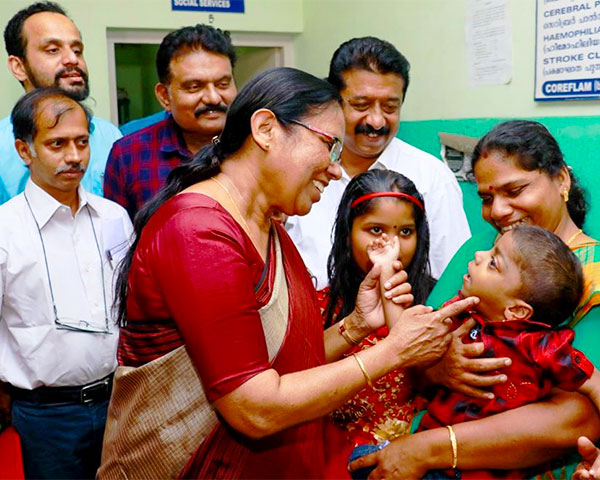 "Renuka Viswanathan is a public finance specialist who has worked in the Cabinet Secretariat, Planning Commission and Finance Ministry in India.