No Let up In Persecution of Christians During Covid Era

The absolute sense of impunity generated in the administrative apparatus of India by the Corona pandemic lockdown, and the consequent absence of civil society on the streets and in the courts, has aggravated targeted hate and violence against Christians by non-state actors in major states and the National Capital territory, as seen in the 327 or so cases recorded till December 2020.

The EFI Religious Liberty Commission and other Christian agencies including a national Helpline co-founded by the United Christian Forum five years ago, recorded the murder of at least five people. Six Churches were burnt or demolished, while in 26 cases a social boycott was perpetrated on Christian communities.

This is by no means an exhaustive list of incidents. The near collapse of the media, the inability of activists to investigate cases in distant villages because of the lockdowns and restrictions on transport, have severely constrained more accurate data collection of targeted hate and violence. Even in normal times the police were loath to register cases. Covid seems to have aggravated that. The survivors also find restricted access to courts for relief.

Social scientists, political scholars and activists have written that:

“Federalism has ceased to exist and the last vestige of trust has been exterminated. The space for free speech has been drastically curtailed: dissent has been rechristened as anti-nationalism and sedition, and dozens of academics, social workers, students, activists and journalists have been incarcerated for being critical of the government. Hate speech laws are being applied selectively, sending a clear signal that remarks against a particular community will attract no punishment.”

The most alarming development has been the expansion and scope of the notorious Freedom of Religion Acts, which are popularly known as the anti-conversion laws, earlier enforced in 7 states, to many more states ruled by the Bharatiya Janata Party.

Once targeting only Christians, they are now armed also against Muslims in the guise of curbing “Love Jihad” – a Muslim-hating term coined some years ago to demonise marriages between Muslim men and non-Muslim women.

The laws ostensibly punish forced or fraudulent religious conversions. But in practice they are used to criminalise all conversions, especially in non-urban settings. Punishment can be as long as ten years in prison.

On October 31 2020 the Chief Minister of Uttar Pradesh, announced that his government would pass a law to curb “Love Jihad”. With no legislative discussion, it became law by an ordinance passed by the state Governor, Anandiben Patel.

By December 2020, police in Uttar Pradesh had filed 14 cases under the law and made 51 arrests, of whom 49 persons are still in jail. In only two cases did the woman “victim” sign the complaint. The rest of the cases were filed by others including relatives. Two of these cases were against Christians, one in Gautam Buddha Nagar and the other in Azamgarh.

Responding to several writ petitions, the Supreme Court agreed to examine the constitutional validity of the laws enacted by Uttar Pradesh and Uttarakhand if they were first challenged in the respective high courts.

Christian activists fear that the expanding footprint of the anti-conversion laws brings us a step closer to the BJP’s manifesto promising a nationwide law to check evangelisation by “missionaries”, a term designed to impute Western conspiracy to Christianise Dalits, Adivasis.

This, together with the accusation of an “Islamic population explosion” because of the higher birth rate among these poorer communities, feeds the orchestrated rhetoric that the Hindu population will become a minority which underpins electoral propaganda in India.

Under cover of the anti-conversion laws, religious minorities can now be targeted by just about anyone, especially vigilante groups, many of whom are complicit in the mob violence of earlier years in campaigns against beef and the slaughter of cows.

Former chairman of the National Law Commission, Justice AP Shah, has called out this law saying it “reflects the philosophy of a khap panchayat”, and strikes “at the very root of right to life and liberty guaranteed under the constitution”.

Uttar Pradesh once again heads the list of regions where the Christian minority has been targeted the most. RLC registered 95 incidents against the Christian community in the state in 2020, followed by Chhattisgarh with 55 incidents, most taking place in the Adivasi region of Bastar, now saturated with volunteers from Hindu right-wing organisations posted to “counter Christian influence”.

In Chhattisgarh, as in contiguous Adivasi regions, these groups face almost no political challenge. The Church has been present in the state and in the region for the last 200 years.

The push of the Hindu Right wing in Jharkhand is ominously similar to that in Chhattisgarh and has resulted in violence and social boycott of the Christians. Jharkhand and Madhya Pradesh registered 28 and 25 such incidents respectively. Tamil Nadu had 23 incidents.

The most horrendous case of 2020 was the lynching of a 14 year old boy in Odisha’s Kenduguda village in Malkangiri district on 4 June. He was allegedly crushed to death with a stone by a group of people who then chopped the body into pieces and buried them in several places.

In the FIR, the police noted that the victim and his family including his father had adopted Christianity three years before. Christians in this village have been facing many threats and are being harassed by religious fanatics. Local Pastor Kosha Mosaki said, “He was earlier attacked in February this year. I have made 4 complaints at the Malkangiri Police Station regarding these attacks.”

On May 31 2020 in Budhakaman village, West Singhbhum district, Jharkhand, in a typical attack, a group of people set the church Cross on fire. Pastor Sudarshan Sinku’s wife Suman Sinku reported that the police later summoned both parties to the Jagannathpur police station.

On September 22 and 23 2020 in Kakdabeda, Singanpur, and Tiliyabeda villages of Kondagaon district, Chhattisgarh, around 16 houses were completely razed by villagers egged on by Hindutva groups. Large-scale social boycott and attacks followed when villagers refused to denounce their Christian beliefs or leave the village as demanded by local political groups. The police did not take any concrete action. Instead, the police and administration sought to condone the violence and solve the matter through negotiations.

The most bizarre incident which caught the eyes of the international media took place on March 19 2021 in Jhansi, Uttar Pradesh, when four nuns from the Delhi Province of the Sacred Heart Society were deboarded while on their way to Odisha.

The train stopped at 6.30 pm at Jhansi railway station. A group of pilgrims, also in the same train, accused them of raising religious and political slogans. Police arrived at the spot and arrested the women without listening to them. Around 150 of this mob, mobilised by phone calls and social media, accompanied the women in a procession to the police station. The terrified nuns were released at 11.30 pm after strong intervention by advocacy groups and scrutiny of their documents. 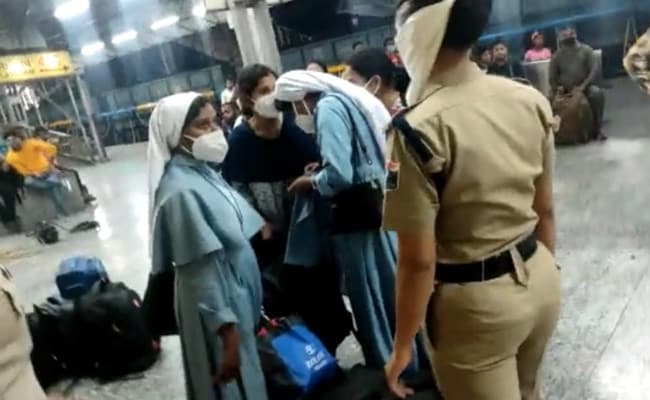