The US Politics of Abandonment

Abandonment is a very cruel and telling word, but that is just what the United States of America has done to Afghanistan, and done so, for the second time.

When you abandon (as opposed to leave), there is an unmistakable quality of surreptitiousness, amoral and sheer indignity accompanying the actions. On July 2, American troops slipped away from the Bagram Air Base, suddenly, unceremoniously, under the cover of night, after turning out the lights and water supply. This came as a complete surprise to the Afghan General who only figured out the cause for the eerie silence two hours before the last American aircraft had taken off.

Integral to the act of abandonment is the selfishness of not caring about those ‘abandoned’. On being asked as to how the Afghans would decipher the US Military exit, the Pentagon Spokesperson John Kirby said brazenly, “I can’t speak for how the Afghans interpreted that decision, but it was a decision made in the best interests of the safety and security of our people”.

Clearly, Donald Trump’s ‘America First’ is still alive-and-kicking, in the Joe Biden era. The Afghans be damned, for the second time.

While the besieged Afghan President Ashraf Ghani is desperately clutching at straws, bargaining, and making fervent appeals for help, the former Afghan President Hamid Karzai slammed the “US legacy in Afghanistan of total disgrace and disaster”.

Belatedly US President Joe Biden invoked a history lesson rather conveniently, “No nation has ever unified Afghanistan, no nation. Empires have gone there and not done it”.

The reckless convenience of this latest American logic is layered even more unconvincingly by brandishing the worthless Doha Peace Accord. More so as its meaningless terms are rubbished daily with the menacing advance of the Taliban, towards Kabul.

Yet the Americans deliberately play naïve. Is it a Vietnam redux? “None whatsoever”, insists Joe Biden, but the overarching sense of American fatigue, couldn’t-care-lessness and insincerity of a farcical ‘Peace Accord’ are eerily familiar with the dubious Vietnam saga – it is undoubtedly, abandonment yet again.

Flashback 45 years, when the United States of America had then abandoned South Vietnam to its insensitive fate, a still wet-behind-his-ears Senator had rejected a call to evacuate and protect the loyal South Vietnamese who had fought for the Americans. That senator’s name was Joe Biden. Young Biden had incredulously stated, “I will vote for any amount for getting the Americans out. I don’t want it mixed with getting the Vietnamese out”!

That Senator is the President of USA today, and arguably amongst the better options – history offers him another chance, to either replay abandonment (as it seems headed), or to still ensure a modicum of protection, support and continuity via alternative means, that does not tantamount to another shameful abandonment.

It is worth introspecting if the Americans learnt any lesson from the humiliating abandonment of 1975, after over two million Vietnamese and 58,000 American troops had died in the 20-year war? Post-Vietnam American history would suggest, not so!

Pursuant to cold war instincts, the Americans undertook Operation Cyclone (CIA-ISI program to arm and finance Afghan mujahideens, the frontrunners and progenitors of the extremist Taliban phenomenon), and then abandoned the Afghans to the bloodthirsty spiral of a civil war, and didn’t look back at the mess created and left behind, till 9/11/2001.

Two missing twin-towers from the New York skyline were a grim reminder of the inevitable cost of abandonment. But the lesson was still not fully learnt, as the Americans abandoned yet again, this time in 2011.

Like now, the American public and the exchequer had tired of American intervention and the US military withdrew its troops from Iraq in 2011 – knowing fully well of the unsettled sectarian reality and dangerous vacuum, that it was bequeathing. This sudden vacuum led to expected reactionary violence that subsequently bore the ISIL/IS and such-like retrograde forces.

The Americans had to return to Iraq in 2014 – not because the blood loss was American, but because the energy supplies (oil and money) and the allied, illiberal-Sheikdoms, were now at stake. Importantly, the Americans did not return to Vietnam after the 1975 disgrace, because there were no energy stakes or American blood flowing on the streets of Hanoi, only that of the Vietnamese, and that did not matter!

Neither did the bloodlust of the Afghan warlords’ matter or the natural metamorphoses of residuals into the Taliban in the 90’s – nothing ‘precious’ was at stake, only Afghan lives! Of course, 9/11 changed the perspective – 2977 people had died on US soil (crucially, 2605 of them were US citizens).

Now, the US chooses to abandon Afghanistan for the second time - knowing what happened when they abandoned South Vietnam, Afghanistan, and Iraq. Already the Taliban is raging towards Kabul and the official Afghan forces are simply capitulating and deserting the ranks.

In an inevitable sign of times, Taliban has confirmed plans of Afghan Air Force pilots to be “targeted and eliminated because all of them do bombardment against their people” – over a 1000 Afghan soldiers have sneaked into neighbouring Tajikistan, the bloody cost of abandonment has started.

A former Commander of the US forces in Afghanistan, David Petraeus, said in some plain speech, “We are potentially consigning Afghanistan and the Afghan people to a civil war”. Yet Joe Biden remains keen to maintain the necessary and convenient pretenses of situation-under-control to legitimise his hasty withdrawal, even as he said in the face of obvious meltdown by Afghan troops, “I trust the capacity of the Afghan military, which is better trained, better equipped and more competent”.

No one is convinced, not even the Americans, but they weren’t convinced about the South Vietnamese in 1975 either, and it frankly didn’t matter, then also.

With this latest abandonment, not just the obvious element of security, but the entire edifice of American morality, commitment and credibility of sovereign ‘support’ is at stake. Afghanistan has been a litmus test of planning, ‘allies’ (read, Pakistan) and operational execution – in short, it has been a $2 Trillion dud, an abject failure, made worse by barely-concealed portents of abandonment.

Everything and everyone is sacrificial in American calculations.

There are always two broad narratives that emerge from any American military intervention – firstly, the dominant and manufactured storyline by the blunt ‘monopoly of truth’, where Americans are posited as the just and committed interventionists.

Secondly, the alternative narrative that only resonates in the imagination of the unseen and unheard swathes of Arab streets, Iran, Afghanistan etc., that sees the opportunistic, amnesiac and selfish word of the Americans, who can easily forsake an ‘ally’, at the altar of selfish conveniences.

Till the twain meets these narratives, abandonment will be the dominant sense in Afghanistan, and only the Afghans will pay the price in the short run – the consequences in the long run are always a different story, and it remains an unlearnt lesson. 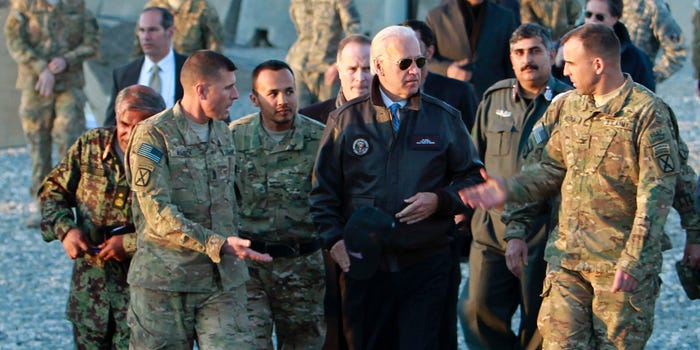