Jallianwala Bagh: A Martyrs Memorial Turned into an Amusement Park!

To please some politicians

When I visited Amritsar some five years ago the only place that appealed to me, besides the grand Golden Temple, was a small, almost unnoticed little square – the Jallianwala Bagh Martyrs’ Memorial.

Standing in front of the wall riddled with bullet marks and the well into which scores of hapless people jumped to escape those bullets, one had an indescribable feeling. I could easily imagine how the narrow entrance to the small square was blocked off by the troops, and what a massacre it would have been when they started to fire upon the unarmed people of all ages who had gathered there on that fateful day to protest a draconian law.

After going around the small square when I stood in front of the simple Martyrs’ Column with an ‘eternal flame’ in front of it I felt a surging emotion inside. From their sombre facial expressions and the silence in which they moved around it was obvious that some of the other visitors too had similar feelings.

I was surprised to see that such an important and well thought out Memorial was rather unkempt. A shaded corner of the complex had in fact become a resting place for people. The small room at the exit, with pictures of some of the martyrs and other freedom fighters and a sketchy write-up in English, was an apology for a historical gallery.

It was obvious that some uninterested bureaucrat and not a historian had been entrusted with the job of gathering up some material and putting it on display. The dark room, the dusty displays and pictures, in fact the whole atmosphere was one of apathy and neglect. Visitors were entering the room only to step out without giving the exhibits a second glance.

I discussed it with my wife, standing in that room as to how much more could be done to make it compelling. It could have, like they do in Europe, big panels written in English and other local languages with pictures of freedom fighters, Tagore’s historic letter renouncing his knighthood, and some newspaper cuttings of the period. It would help make visitors aware of the importance of the place.

So we were delighted to learn that the Union Government had taken up a project to revamp the Jallianwala Bagh Memorial. We did not know then what our new crop of planners understood by the ‘restoration’ and ‘development’ of this historical site. The story that has come out in the press is really shocking and disgraceful to say the least.

Instead of drawing applause, the outcome of the 20-crore project is drawing flak from all around. It is reported that far from feeling that one is entering a site where perhaps the most horrible massacre of our freedom fighters had taken place, the revamped entrance reminds one of an expensive wedding garden.

It is also being criticised for tampering with the historic narrow lane that led to the square, and lining it up with some quite ‘out of place’ murals. There will also be that ‘must have’ nuisance of son et lumière at Jallianwala Bagh.

The main purpose of maintaining historical sites is to convey the importance of these monuments to those who visit them. When it comes to restoring such sites, the developers must keep in mind that nothing is added to or removed from there to ‘beautify’ them.

Jallianwala Bagh stands as a testimony to the barbarous attack by British troops on a peaceful gathering of unarmed protesters against a draconian law. Here the visitors come to remember and solemnly pay homage to those who laid down their lives for the country. Therefore, while the memorial must be kept neat and clean, with the necessary repairs so it does not turn into a mound of debris, nothing must be done that is incongruous with its purpose.

The narrow entrance actually was extremely important for visitors to appreciate how that entrance was blocked by troops firing their guns, which made the enclosure a virtual death-trap for those who attended the meeting on the fateful day. By obliterating that piece of history and replacing it by a new pathway lined with some murals that never belonged there, the mindless developers have actually destroyed the raison d’être of the memorial.

Quite obviously, those who were entrusted with ‘revamping’ Jallianwala Bagh had no notion of the gravity of the job they were supposed to do. In their eagerness to beautify and ‘develop’ the memorial, apparently to please some politicians, they forgot that it was not meant to be an amusement park.

Those who have visited the Atomic Bomb Memorial in Hiroshima will know how the Japanese have kept alive the memory of that terrible event in world history. There are new developments around the place, but one building, partially damaged, has been kept as it was.

And through photographs, write-ups and short audio-visual clips the museum there presents to the visitor the horrors of the event and the great suffering it caused. Many visitors, including foreigners, become visibly pained and emotionally overwhelmed by the displays. That is what is needed in places like Jallianwala Bagh.

Unfortunately in its present avtaar the Memorial at Jallianwala Bagh will hardly evoke the feelings that one should have in such a place. One will perhaps enjoy the ambience, take a selfie or a group photo before the lotus pond in front of the Martyrs’ Column, and in the evening enjoy the Light and Sound programme.

I strongly doubt, however, if standing before the bullet-holed wall one will be transported back to that day over a century ago when thousands ran helter skelter in the face of bullets hissing all around, with no way out.

There will be lots of loud expression of patriotic fervour by the visiting hordes, but one would miss the goosebumps one had on a sunny morning, facing the simple but beautiful Martyrs’ Column at Jallianwala Bagh.

Sandip Mitra is retired from the Indian Foreign Service 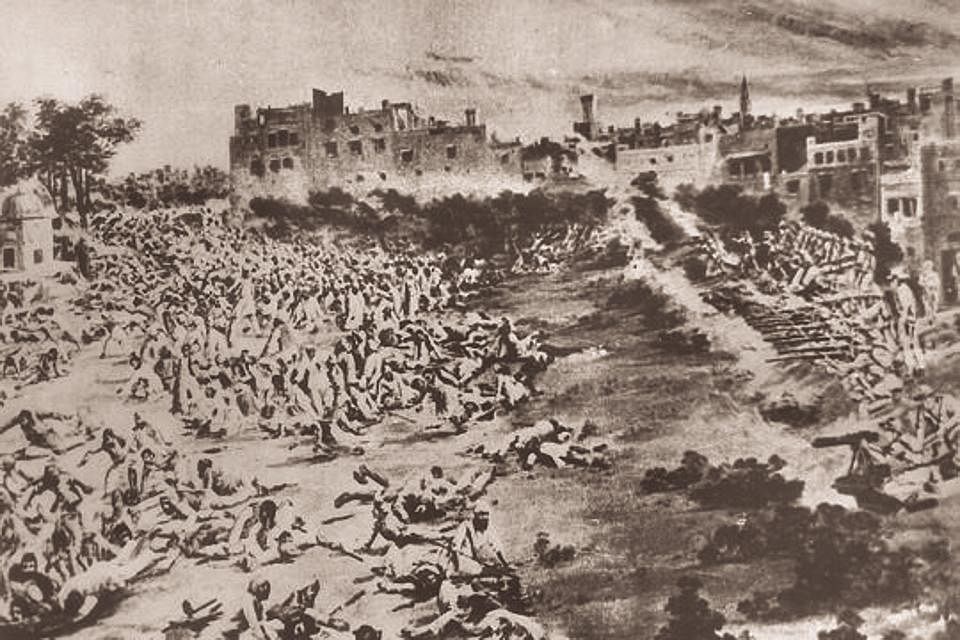 The writer is retired from the Indian Foreign Service