The tales of defeat in North India

History invariably is written and rewritten to serve the political and ideological cause of the ruling elites. No wonder Winston Churchill said: “Gentlemen, history will be kind to us- we will write it!”

Take Indian history as is being taught in our schools today, it is the history of the vanquished. It is mostly a chronological scroll down of events in the Indo-Gangetic plain.

The textbooks start with the Indus Valley civilization and after that remain largely focused on the consecutive onslaughts and occupations of India from the northwest. Like the Aryans, Greeks, Bactrian’s, Huns, Afghans, Persians, Arabs, Uzbeks, Mongols and Turks, not necessarily in that order, all of whom entered through its northwest and stayed to leave their respective imprimaturs on India.

The other part of the story covers the European era and India’s freedom struggle, which is mainly the story of the Indian National Congress. These invasions, subjugations, prolonged residence and assimilation broadly constitute the history of India, whoever it is written by and for, that is imparted to us.

As a young student in a Catholic school, in recently independent India, the first history lessons imparted to me told that story, particularly the period of the last occupation by the British, somewhat differently. According to this, British rule was a most benign and beneficial period for Indians. This could even be true for social reforms like the abolition of sati and the building of great canal systems and railways happened during this period. The unification of India into one great political entity also happened in this period. Above all, southern India came under Delhi’s imperial rule for the first time.

On the converse side today’s heroes like Tipu Sultan were cruel and callous tyrants, and what happened in 1857 was a most perfidious mutiny in which English women and children were raped and murdered by rampaging hordes of mutinous soldiers and freebooters. In 1957 the centennial celebrations of the First Indian War of Independence happened and I suddenly discovered that what my history textbook was having me believe was wrong.

Whatever be the version of history that emerges, the RSS’s or that of Romilla Thapar, Irfan Habib and others, what will still remain is a history focused on the people of the Indo-Gangetic plain. And that is my real grouse. Take for instance the two volumes of The History of India by Percival Spear and Romilla Thapar. Of the twenty-four chapters twenty-one are about the peoples who, either lived in or kept conquering the Indo-Gangetic plain.

South Indian history, which is fairly distinct and certainly more glorious than the tales of defeat after defeat in northern India, gets only three chapters. And mind you the Deccan region now accounts for almost forty percent of India’s population. Little is told about regions like Orissa and Bengal while Assam hardly figures. Of course as can be expected there is not very much written about the original and autochthonous pre-Aryan and pre-Dravidian people.

If Spear and Thapar are reticent about acknowledging the role of other regions in shaping modern India, AL Basham and SAA Rizvi in their two volume effort “The Wonder That Was India” have even less space for other regions and their contribution to the composite culture and the multi-dimensional character of the Indian nation.

Rizvi’s volume covering the period 1200 –1500AD is so single-minded that it is entirely devoted to the Muslim rule over parts of India. Quite clearly if Indian society has to be inclusive, all its various peoples must share a common perspective of the past. This is not so at present and hence, to my mind at least; the history textbooks need to be rewritten.

What then needs to be debated is what should this history be, for facts cannot be altered and the past cannot be wished away. The Communists are past masters at airbrushing out people and rewriting history to suit each regime. Official photographs of the collective leadership immediately after the demise of Lenin, as Stalin kept consolidating his control, saw the progressive elimination of historical figures from history. No Trotsky, no Zinoviev, no Martov, no anybody who Stalin did away with. Similarly in China few would now hear about Lin-Biao who Mao anointed as his successor.

The written history of India is quite ethnocentric and focused mainly on Manu’s Aryavarta, which by the ancient lawgivers own description did not extend south of the Vindhya’s. Beyond the pale of Aryavarta was the land of the non-people and the legends of the Indo-Gangetic plains fully reflect these primitive attitudes.

This northern bias manifests itself in several ways, sometimes with great economic consequences. The tourism industry in India is mostly about Delhi, Agra and Jaipur. True the stupendous beauty of the Taj Mahal is a great magnet that draws tourists into India from all over the world.

But the profligacy of the Mughals and the collaborationist kingdoms of Rajasthan cannot be India’s only attractions without the almost exclusive promotion of these by the government and the tourism trade. So much so that the past that can still been seen in places of great historical importance like Badami, Vijayanagar, Belur and Halebid in Karnataka, Warangal in Andhra Pradesh and Kanchipuram, Madurai and Tanjore in Tamil Nadu do not have half decent facilities to encourage tourism.

Even Bijapur with its great Gol Gumbaz and gigantic mosque does not have a half decent hotel or any worthwhile facilities for tourists. If the battles of Panipat are important in the history of northern India, the battle of Talikota determined the final fate of the great Vijayanagar kingdom with the defeat of its powerful army by the forces of the Muslim confederacy. There is not even a marker at Talikota suggesting a battlefield consecrated with so much blood and so much valor.

So by all means rewrite our history. That task is long overdue. Till then written Indian history will remain just what it is, a compendium of defeats. 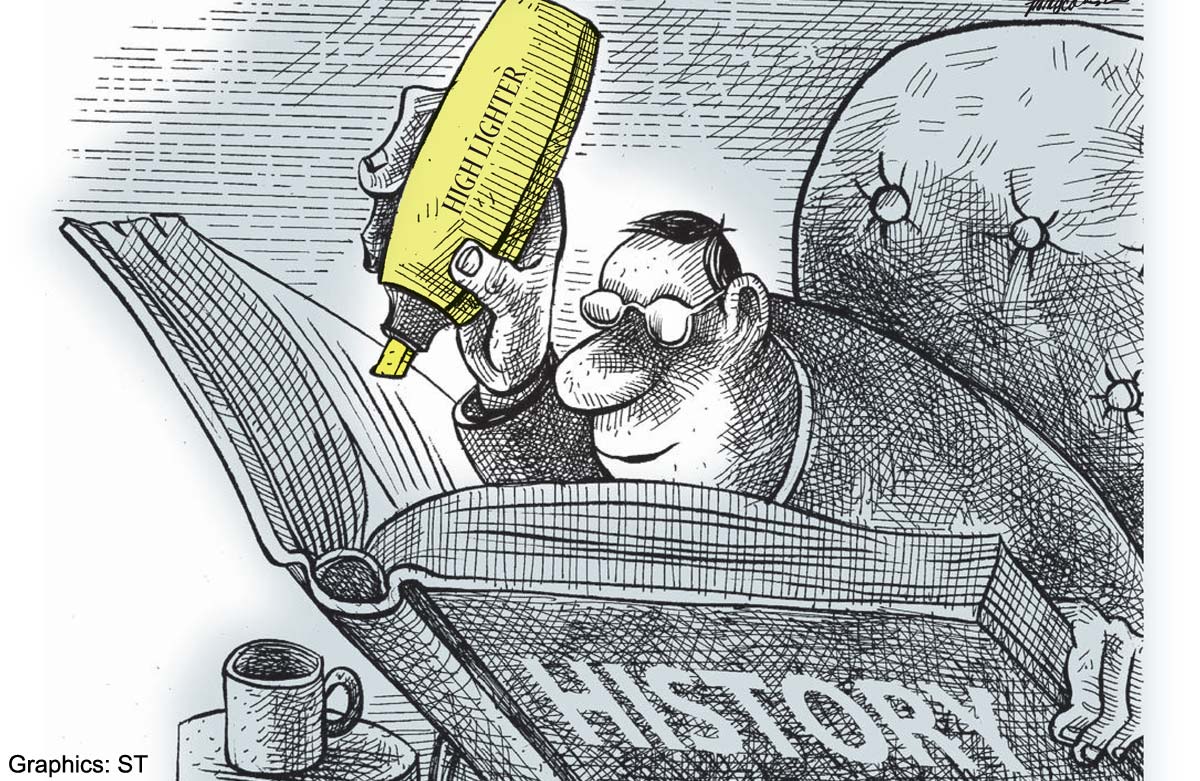