Is UP Indeed Looking For a Change?

There are many indications from Uttar Pradesh, the state everyone believes sets a national trend, that the people are looking for a peaceable, decent alternative. And have had it up to their necks with the politics of hate and anger, abuse and violence and want an alternative.

The most recent indicator of this was the crowd going happily crazy when the campaign raths of Akhilesh Yadav and Jayant Chaudhary on the one side, and Priyanka Gandhi on the other came face to face. And the cheers grew in volume as the three leaders smiled and waved at each other, and made that extra effort to show a political bonhomie that has been missing from the political arena in UP for a long while now.

In western UP, the roving cameras of journalists bring in the ordinary farmers - young and old, Jat and non-Jat, saying they have had enough of the politics of hate. That this Hindu Muslim, Mandir-Masjid politics has cut into traditional bhai chara, that they made a mistake (yes many have said that to cameras) in falling for it in the first place, and that all communities want to live in peace, and live together. As articulate young men say with the honesty of the farmer in western UP, “we will not fall into this trap again.”

Akhilesh Yadav and Jayant Chaudhrary have worked it out well. The two young leaders have decided from the word go that they will not even venture into the politics of mandir and masjid. And focus entirely on issues impacting on all castes in populous UP. Joblessness, farmers issues, health arising out of the mishandling of Covid, are the three top issues being focused on, with the two who now seem to be the main Opposition to the BJP in the state, refusing to be drawn into the politics of hate.

In fact, Akhilesh Yadav has decided to counter abuse with humour, And there are enough stand up comedians commenting on the politics of UP who have deepened the trend. As there are any number of journalists who have started Youtube channels to record what the common person is saying. Voices that are blocked out by the television channels who choose to travel in raths flagged off by the state chief minister, instead of even bothering to appear impartial and independent.

So there are two narratives at play in UP. The one that continues with the 80-20 argument in favour of divisiveness, intolerance and hate. The other that has managed fairly successfully to get away from this narrative and embrace development — joblessness, price rise, agrarian unrest, health and covid, womens safety- as the way forward. It is working because the people are in a mood to make it work.

And that is fundamental to the vote. UP has seen two waves in recent years. One a very silent wave just after the Emergency when even then Prime Minister Indira Gandhi had no idea that she would be swept away. And another vocal wave in support of Vishwanath Pratap Singh who was carried on the shoulders of what was at one time the traditional vote bank of the Congress in UP. The first support dissipated after the anger had worn out, and the shaky Janata Party coalition was unable to deliver. The second hollowed out after VP Singh brought in the Mandal Commission recommendations much to the chagrin of the upper castes who had embraced him.

Many today predict a wave against the BJP. And thus, in support of the SP-RLD combine as it is the strongest standing. The support was not expected by the Samajwadi workers, and an initially hesitant Akhilesh Yadav has blossomed under the spreading canopy of support — becoming more confident by the minute.

Veteran SP leaders are clear that the support has come on its own, and not because the party has actively worked for it in the past years. In fact, Akhilesh Yadav has not been very visible earlier, preferring Lucknow to the districts of the state. And the support they say, has come out of anger with the BJP, its failure to fulfil promises, it's arrogance and visible indifference to the plight of the common person. So while the HIndu-Muslim card had worked even amongst the Jat farmers who are now leading the anti-BJP tirade , it has exhausted itself according to the same voters who had chosen the BJP in the last state polls. It is being dismissed now as a deliberate distraction, manipulation (different terms for different voters) by the ruling party to garner votes at the expense of livelihood and development.

The voter, thus, is in a mood to desert the BJP and support the Opposition. To what extent it does depends on the ground, and the ability of the Opposition to mobilise and mop up the votes and conversely the ability of the BJP to puncture the support and prevent it from turning into a wave. As all in the fray are aware that only the classical UP wave will be able to dislodge the BJP that has otherwise the machinery and organisation to win in hand to hand constituency battles.

The one factor that seems to be working against this particular ability of the ruling party in the state is factionalism within. Whispers —given louder voices by local journalists on YouTube and workers who insist they know—suggest rivalry between Delhi and Lucknow; and within the Lucknow BJP as well. While the grapevine might well be exaggerating the discord, a political indicator that all is not well lies in Adityanath giving up his plans to contest the polls from Mathura or Ayodhya and coming back to Gorakhpur instead. In the process he has dislodged Radha Mohan Das Agarwal who is a four time MLA from the Gorakhpur Sadar seat. However, while some insist that Agarwal is not at all happy – Akhilesh Yadav hinted at that during a recent press conference— others in the BJP are categorical that there is no rift. And that Agarwal will campaign actively for the Chief Minister.

The Modi vs Yogi rivalry remains a hot subject of discussion and speculation in Lucknow’s political circles. True or not, there is sufficient to support both sides of the argument centering around Adityanath’s supposed ambitions. That if he wins he will be a contender for the top post in Delhi after the general elections in 2024 is one such argument. And hence there are the supposed ‘many’ who would be quite happy to see him lose. And the list starts with Amit Shah!

However, that is what it will be but there is growing disaffection with the BJP amongst castes other than the top. The Brahmins are a little attracted by the Congress in a few pockets, but along with the Thakurs remain largely with the BJP. The Yadavs who had voted for the BJP in significant numbers in the last polls have returned almost entirely to the SP, along with the Muslims. The Dalits remain split between the BJP and Mayawati. The backwards seem to have taken a turn in influential areas such as eastern UP towards the SP. The Jat farmers have deserted the BJP for the RLD-SP coalition in western UP. The farmers as a community are angry and have been chasing legislators out of their constituencies in west UP. The students and youth are frustrated and even more resentful with the ruling government facing their wrath. Hundreds and more who lost their relatives during the pandemic have not been assuaged by promises of a dole. There are many aggrieved sections in UP now, who had gone with the BJP in the hope of ‘better days’, but are now standing disillusioned, and reeling under the twin weights of unemployment and price rise.

All in all a scenario that is not one sided as doors have been pushed open by determined voters. Whether these will become floodgates during the coming weeks will determine the course of not just UP, but also Delhi. 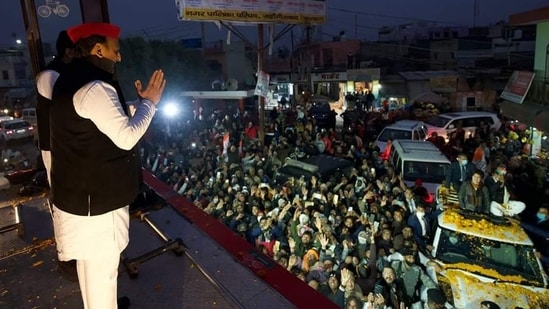