The Media and War

The Russian-Ukraine conflict has provided an excellent window into modern day coverage of developments that still have the potential of throwing the world into World War 3 with no lessons drawn. A polarised media — more than even the countries in confrontation — is taking sides with lies, fake news, hyperbole, loud rhetoric and propaganda with the voice of reason having literally disappeared from the world stage.

Instead both sides, the official journalists with their media channels and publications, and the wannabe scribes on the social media are hurling abuse at each other for supporting one or the other; and actually waging their own war with disastrous impact on world opinion. Even those against war per se, are confused and lost with the facts remaining blurred and the rhetoric high.

There has been little effort, even by the big guys, to carry dispassionate articles on the build up to this conflict; the relations between Russia and Ukraine; the role of the US under a weak President; the sides taken by the European Union; the push and the shove leading to the invasion. After all this has not happened overnight. Perhaps if facts had been filtered and reported honestly the context would have been established for people not to throw themselves behind one army or the other and instead plug for peace in larger numbers than visible now.

A visible division is between the whites and the coloured people — cannot say governments as often the governments of the browns and the blacks follow the governments of the blue eyed and blonde people. A political and media support of racism is very visible in the BBC interview of Ukraine’s former deputy general prosecutor David Sakvarelidze where he said, “it is very emotional for me because I see European people with blonde hair and blue eyes being killed every day with Putin’s missiles and his helicopters and his rockets.” This was bad enough and has incited strong reaction across the world but it was made worse with the BBC presenters response, “I understand and of course respect the emotion.” Really?

And in play thus are reminders from scholars, journalists and the ordinary folk who have suffered war and are still facing conflict with little response from the United Nations. Saudi Arabia has left death and devastation in South Yemen; Israel has not given the Palestinians room to breathe; Iraq, Syria, Libya, Afghanistan — reminders of the one-sided wars and invasions of these countries are pouring fast and wide on social media.

The media’s behaviour is reprehensible. CBS news senior correspondent in Kyiv, Charlie D’Agata said, “this isn’t a place, with all due respect, like Iraq or Afghanistan that has seen conflict raging for decades This is a relatively civilised, relatively European — I have to choose those words carefully too – city where you wouldn’t expect that, or hope that it's going to happen.” As many pointed out he is a journalist of the relatively moderate CBS and not Fox News or some such extremist channel.

The result is that even while decrying war, everyone seems to be baying for war. The ‘civilised’ media that claims to be on the side of Ukraine is busy demonising Russia to the point where the aggressive postures of the European countries and of course the UK and the US are being condoned vociferously. Ukraine has reacted to India’s decision to abstain on the UN resolution against Russia by encouraging the manhandling of Indian students trapped in Kyiv, as if that is civilised behaviour.

In Russia, Putin has restrained the media. And the demonisation of Ukraine, along with a play down of Russian losses seems to characterise the coverage out of Moscow. Of course even as Ukraine insists its soldiers and guards are not backing off, the Russian media is insistent that its troops are meeting with little or no resistance. And there is widespread surrender of Ukrainian troops. The media can only use official figures, and censorship has become tighter. So the truth is lost both ends, and people are left free to believe whatever they want in the absence of honest and independent coverage. Dangerous even in peace time.

Journalists create an environment that then allows governments to either back off from conflict and violence, or move ahead with the trajectory of hate and divisiveness. We have seen the role of the Indian media for the past years. Now the world media is providing proof that the next world war, or indeed any war, will be encouraged and propagated and promoted by journalists across the world even as they claim to oppose it. After all Hitlers blue eyed and blonde words from Mein Kampf have been taken forward this time around by the media, that has legitimised a completely racist statement.

For long journalists were united globally on peace. The press played a major role during the Vietnam war in building an environment where American activists were able to take to the streets. This disappeared when the American scribes appeared in Iraq atop military tanks, describing themselves as ‘embedded’. And since then it has been downhill all the way, where the doctrine of peace has been shed by journalism and its practitioners for the doctrine of war. Where facts are obfuscated — such as a video of Israel bombing Gaza being used by the media as Russia bombing Ukraine— and lies perpetuated. To create sides, hate, and thereby help escalate the violence.

So when events, these or any other, lead to a global war the media all around will be found sitting in air conditioned studios and twisting the truth to support war. The voices for peace have already been marginalised, with the dearth of good informed articles and sound coverage isolating the option of war created a climate of hysteria and anger. Governments thrive in such an atmosphere, with authoritarian leaders and weak elected presidents both needing the diversion to survive. And the media knows it, living off the crumbs of power, to prolong conflict with not a thought for the suffering and the destruction.

So if WW 3 looms large on the horizon journalists across the world will be the cheerleaders. 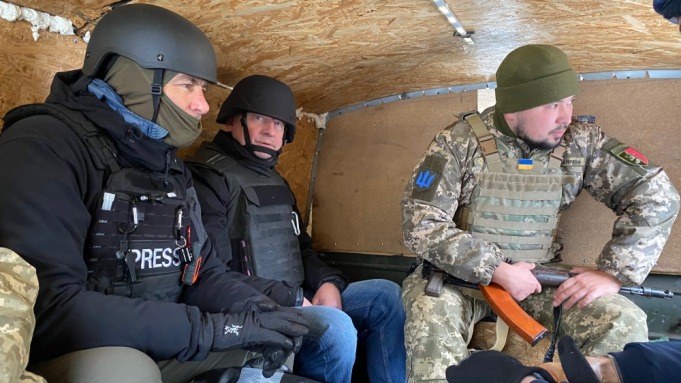