‘Electoral democracy’ is in total disarray

Soon after BJP’s “jeet ka chauka” (a winning four) in distant states like Goa and Manipur besides Uttarakhand and Uttar Pradesh, Prime Minister Narendra Modi made a victory speech at his palatial party office in New Delhi. And this is what he said.

“After the 2019 LS polls some gyanis (wise ones) said there was nothing special about it as it had been decided in the 2017 UP assembly polls. I hope that these gyanis will once again show the courage to say publicly that the 2022 assembly election results have determined the fate of the 2024 LS polls.” Obviously, Modi had in mind the key state of UP which is home to one-sixth of India’s electorate.

Many gyanis and journalists seem to have taken this hook as is evident from the hype being created that the BJP is invincible and a juggernaut that cannot be stopped by the political opposition. Some of them are even forecasting that Parliament 2024 is done and dusted and the opposition should look at 2029!

Under the wrong presumption that BJP had captured majority Hindu votes Shekhar Gupta of The Print gave an SOS call to the opposition:

“If you want to beat the Modi-Shah BJP, you have to still win a sufficient number of Hindu votes to deny it that critical 50-plus percentage. If you can’t, as in UP, Bihar and Assam, you are wiped out. That is why the parties of Akhilesh and Lalu Yadav, built on a Muslim-Yadav core, can no longer win. Unless they are able to bring in other strong and large caste groups from within the Hindus, they do not have a chance. Unless you fight the BJP for the Hindu vote, you have no chance.”

But the realities are different and the numbers in UP, the state that matters for 2024, do not support his bombast and the commentators’ predictions in any manner.

The fallacy is that almost all of them are looking at the mandate only from the angle of votes polled. This is completely misleading, because while making an analysis of people’s mandate we must look at the number of registered and eligible voters and not the polled votes which could sometimes be dismal. And under the archaic first-past-the-post system prevalent today it could well be disastrous.

Let’s look at the UP scenario. There were 153 million eligible voters in the just concluded election. The average voter turnout was 60.6% as against 61.04 in 2017. This means that around 90 million electors voted and 63 million did not vote. The BJP’s vote share is 41.33% of the 60.6% who voted, or 37.2 million votes in absolute terms. This works out to just 24.3% of the total eligible voters. Less than one-fourth of the UP electorate have voted for BJP.

It is a very low mandate that does not behove a representative democracy.

Coming to Hindu votes at 80% it would translate into 122.4 million eligible Hindu voters. Assuming hardly any Muslim voted for the BJP, the percentage of Hindu electorate who voted for BJP would be 30.4% or less than one-third. It would therefore be a fallacy to say that Hindus of UP are swayed by the hardcore Hindu Rashtra (Hindu State) agenda and the resultant spewing of communal venom by the BJP.

The Election Commission of India miserably failed to maintain 100% secrecy of voting within each constituency by not randomising the vote count, which is essential for conducting elections in a free and fair manner as mandated by Article 342 of the Constitution of India and Section 128 of the Representation of the People Act, 1951. This exposed the vulnerable sections - Muslims, Dalits, women, the working poor, the young unemployed and some farmers - to intense pressure by ruling party politicians hell-bent on winning the election at any cost.

It also raises the question as to how many of the 63 million eligible voters did not, or could not, vote this time as a result of the incumbent regime’s tactic of ‘voter suppression’. How many of these 63 million voters would have voted for the BJP, and how many against the BJP, if they had voted?

Of the 37.2 million who voted for BJP, how many votes were by rigging the electoral rolls and by impersonating the Covid dead? How many were from ‘spurious vote injections’ which is very much possible in EVMs, particularly after the introduction of VVPATs. And how many were from the EVMs in the trucks which were seen freely moving on the roads of UP?

This report has credence considering the fact that the EVM patents of BEL and ECIL having expired there is no clarity as to where the Election Commission is procuring these machines from and who is manufacturing them. And the Commission has been very secretive about it, even rejecting RTI queries.

Be that as it may, the voting pattern, mandate and BJP’s vote share in the UP election is almost the mirror image of the 2019 Parliament election and a shade less. For the Parliament election, India had a total electorate of 910.5 million of which 67.4% votes were polled which was 613.6 million. BJP secured 37.36% of these polled votes which was 229 million. Its vote share as percentage of total electorate was 25.15%, just about one-fourth of the electorate.

Coming to Hindu votes in the Parliament election, the ratio is almost the same. At 80% the Hindu electorate in 2019 was 728.4 million. 31.4% of the total Hindu electorate gave its mandate to BJP which is less than one-third. Overall, on both counts (total electorate and Hindu voters) the BJP’s 2022 performance in UP is marginally lower than in Parliament 2019. Media and even some gyanis calling it a ‘landslide’ and ‘magnificent’ mandate is nothing but pathetic.

This low performance is despite the widely reported violations of electoral ethics and code of conduct by the ruling party and its VIP campaigners. This included hate speeches and communal polarisation, oligarchic might, immense mainstream and social media misuse, massive money and criminal power and cash-for-vote.

What is worse, Opposition Unity Index was almost zero. ECI also chipped in by conducting the polling and counting of votes without concern for fairness and integrity. There have been brazen and repeated violations of its Model Code of Conduct at every stage of election by Prime Minister Narendra Modi and Chief Minister Yogi Adityanath and ECI did not even whimper.

‘Electoral democracy’ is in total disarray. EVMs have come under heavy criticism. It is universally known that EVM voting does not comply with the essential requirements of democratic principles: that is, each voter has direct knowledge and capacity to verify that their vote is cast as intended, recorded as cast, and counted as recorded.

It also does not provide provable guarantees against hacking, tampering and spurious vote injections. Even the Voter Verifiable Paper Trail or VVPAT system does not allow voters to verify the slip before the vote is cast. Due to the absence of end-to-end (E2E) verifiability, the present EVM system is not verifiable and, therefore, unfit for democratic elections.

Making things worse are duplication in voting, which is a truism since the introduction of VVPATs. There are two votes now: one recorded in the EVM and one printed by the VVPAT. Rule 56D(4)(b) of the Conduct of Election (Amendment) Rules, 2013 provides for the primacy of the VVPAT paper slip count over the electronic tally of the memory chip in EVMs.

Though VVPATs are installed in every EVM, not even one paper slip was counted and matched to verify the votes polled and counted before the results became public, mandate claimed and conceded. This exposed the election results to serious fraud.

As the numbers show, compared to 2019 all three parameters (polled votes, electorate mandate and Hindu vote share) have declined for the BJP. It is evident that the vast majority of UP electorate have stood firm and secular and rejected the Hindutva hate agenda. Only the political opposition let them down by not coming together.

Bravado and bombast notwithstanding, the BJP ‘juggernaut’ is getting nowhere for 2024. Hence the manufactured outrage of communal fervour through the state sponsored and promoted ‘Kashmir Files’ movie and the desperate effort of the Union government to defer/cancel the elections to the Municipal Corporation of Delhi due in April, 2022.

The writing is on the wall but gyanis have eyes that will not see!

M.G Devasahayam is a former Indian Army and IAS officer. He is editor of the book Electoral Democracy - An Inquiry into the Fairness and Integrity of Elections in India 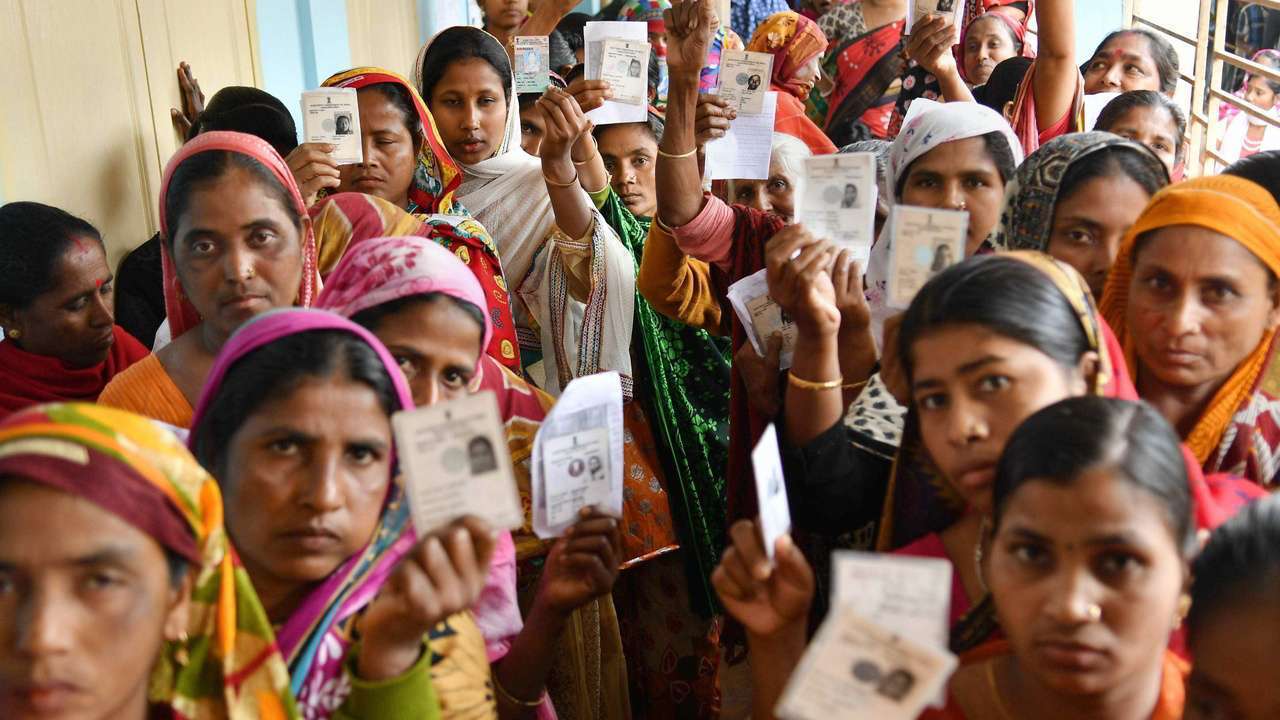