From position 142 to 150 on the press freedom index tabulating 180 counties. Reporters Without Borders has published the 20th World Press Freedom Index that has recorded a two fold increase in polarisation amplified as it says by information chaos. It has seen sharp divisions within and between countries with the opinion media following what RSF describes as the Fox News Model and the spread of disinformation circuits. Democracies, in its view, are being weakened by despotic regimes that control the media while waging propaganda wars against democracies, and also by the asymmetry between open societies.

India seems to be hurtling down into a space where democracy really fears to tread with Russia, Pakistan and Afghanistan just below along with Sudan (that beats Russia today), and Turkey, Philippines, Colombia along with Sri Lanka just above. Norway and other Nordic countries head the index.

India’s record has not been particularly great this year with journalists being attacked, beaten, arrested, threatened, intimidated over the years in the different districts of other states. Recent stripping of journalists, and legcuffing of another to his hospital bed, are photographs that shocked even the opponents of press freedom into silence. Fear is being made to replace trust and confidence with a sharply polarised media facing each other in almost combat posture. Of course those singing paeans for the government of the day draw upon official muscle power for their protection, even as they often break every tenet of journalism.

Journalism in India is buckling under increasing state and non-state intimidation; and its own tendency to embrace fake news, sensationalise, black out news, and take positions that threaten the very independence of the profession. That the media faces government heat is apparent from the slide down of Russia (155), Ukraine (106) and China (175) in this war with RSF registering a confrontation between blocs for the sad readings. In this context it has also mentioned as an example the continuing confrontation between “nationalist Narendra Modi’s India (150) and Pakistan (157).”

The report has also recognised media polarisation “for feeding and reinforcing internal social divisions in democratic societies” giving the example of the United States (42), despite president Joe Biden’s election. The ‘Fox news model’ unfortunately is visible in India as well, with polarisation dividing television and print in their respective approach to news. As a result of which credibility and trust both suffer.

Indian media, despite all the glitches and the waste years of the Emergency, had managed to pedal a fairly straight, independent course. A level of professionalism was encouraged in the newsroom with fact finding being a rigorous process. Journalists, by and large, worked without serious levels of fear and intimidation though always a part of sensitive states and districts was not the norm. That journalism went by rules and ethics was known and accepted, with Indian journalists taking pride in their ability to report without fear and favour. This structure started being dismantled slowly, so much so that even the practitioners of the profession did not notice it. It gathered speed after 2000 and now in the past decade has dissolved independence into sycophancy, facts into lies, news into opinion with the respect associated with the profession vanishing into thin air.

This does not herald well for democracy where the media is the fourth pillar, the watchdog, the messenger, and harbinger of news good and bad. Without a free and independent media, all institutions of democracy suffer and the collapse then is steady and inevitable.

The RSF report is unlikely to work as a wake up call for the media houses here, particularly those for whom disinformation has become key to their existence. Unfortunately governments, not just in India, but across the world, do not realise that independent journalism is a lifeline for their own existence. And a closed and shuttered press becomes part of an echo chamber that lulls governments —not always the people– into a state of sorry somnolence. 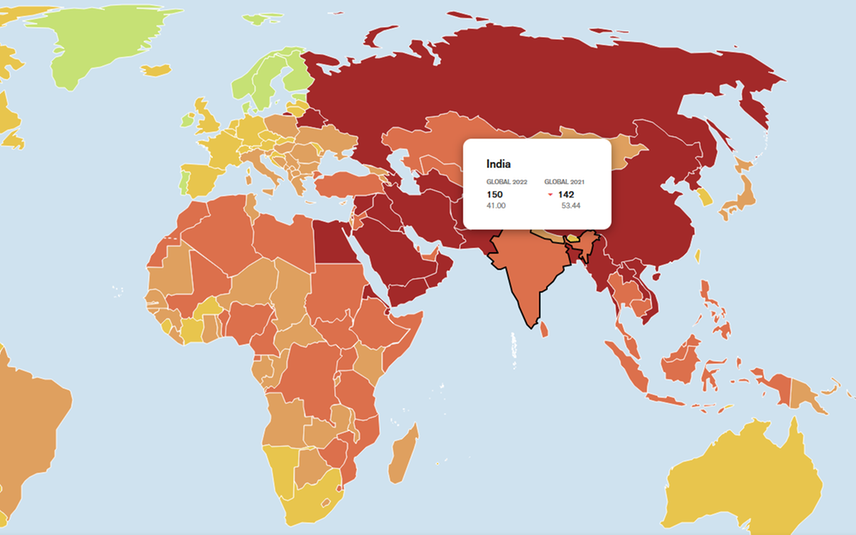