US President Joe Biden’s statements seem to hide a tinge of desperation. A superpower that now has to share its space with an ascending China, and a President who has a former President breathing down his neck domestically could become a recipe for disaster if the responses arising from these are laced with military arsenic.

Not satisfied with stoking and igniting a war with Russia through Ukraine, Biden has now said in Japan that he would be willing to use force to defend Taiwan against Chinese aggression. For a long while now Washington, as commentators and even the US White House have pointed out hurriedly, has followed a policy of ‘strategic ambiguity’ and not really defined whether it will or not intervene to protect Taiwan militarily from a Chinese attack.

Biden’s ‘Yes’ as a response to a question whether the US would defend Taiwan thus came as a bit of a surprise. And it was no accident as he followed it up with a sentence, “that’s the commitment we made’. And went on to add, “we agree with a one-China policy. We’ve signed on to it and all the intended agreements made from there. But the idea that it (Taiwan) can be taken by force, just taken by force, is just not, is just not appropriate.”

The White House officials, however, retracted from this position by insisting that “our policy has not changed.” And that Washington remained committed to peace and stability across the Taiwan Strait. In the process, of course, White House has strangely distanced itself from its own incumbent’s aggressive statement although all stakeholders have not accepted the ‘cleaning up’ and are watching the developments carefully.

China reacted immediately, with the foreign ministry expressing outrage at Biden’s statement. “ No one should underestimate China’s firm resolve, staunch will and strong ability to protect its sovereign and territorial interests, it stated making it clear that “no one shall expect China to make any compromise or trade-offs.”

Having moved out of the successive wars in West Asia and leaving a trail of death and destruction all over the region and Afghanistan, the US seems to be looking for a new arena for military action. Ukraine has been plunged into a sorry mess with the people paying the price after the Russian invasion, while Europe is looking at shortages and galloping prices. China had taken care to keep a distance from this conflict, but Biden’s remarks could now open a door that could lead to repercussions beyond his and every other nation’s control.

In recognition of this, Japanese Prime Minister Fumio Kishida, who was addressing the press alongside Biden when these remarks were made, did not respond directly when asked whether Japan would intervene militarily to defend Taiwan as well. Instead he said that both the US and Japan were for peace and stability in the Taiwan Strait. Clearly, Kishida is not willing to invite trouble at this stage, although he has not minced words in attacking Russia on Ukraine.

The next weeks will determine whether Biden is changing track, and whether ambiguity is going to become a byword for Washington in dealing with Beijing. No one can be in any doubt that China has laid full claim to Taiwan, and will not be forced into any position where it has to back off from this stance.

Reckless statements by world leaders need to be criticised and challenged as these can play havoc with the world. The history and aftermath of two world wars should stop us in our tracks, and make every nation a strong advocate for peace. But unfortunately this is not the way insecure leaders work, and responsibility and accountability seem to have been lost in this war of words that lead to bloody wars and endless conflict. 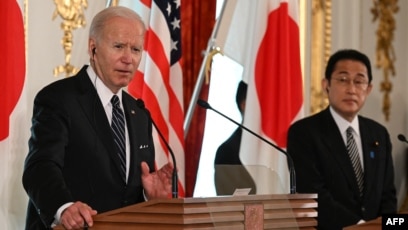