The Sugar Cane of Agrarian Distress

Marathwada is the worst drought affected region of the state.

Welcome move which, unfortunately, does not qualify even as a respectable starting step.

What ought to be done is a systematic closing down of most of the sugar factories in Maharashtra.

The area under sugarcane cultivation in Maharashtra doubled in the decade of 2003 – 2013 from 4.43 lakh hectares to 9.37 lakh hectares. During the same period, the sugarcane produced increased by one and half times to 621.7 lakh tonnes.(1)

The 4% farmland under sugarcane in Maharashtra consumes 71.5% of all the irrigation water including wells.

“The quantity of inland water resources in Maharashtra accounts for only 4.93% of total availability in India. Since the state houses 9% of country’s population, the per capita water availability in the state is lower than the national average. While the average annual surface water potential for an Indian river is 1869 km3 per year, it is only 110.54 km3 per year for the Godavari basin and 78.12 km3 per year for Krishna basin, the two major water basins of the state.

However, lack of management, rather than natural scarcity of water, is the main reason for drought. Since 1960, successive governments have spent over Rs.16,000 crores on rural water supply and yet there are around 20,000 drought affected villages and 45 million people without safe, assured water.

Although Maharashtra has India’s largest number of dams, its water lifeline flows under the ground, like in most other states. According to the Ground Water Survey and Development Agency (GSDA), a whopping 71% of the irrigated area in the state is irrigated not by the large dams and canals but through ground water. Marathwada is reportedly drilling as many as 10,000 bore wells per month in this drought; a boom that is sustained by the ‘boring mafia’ from Andhra Pradesh and Tamil Nadu using travelling rigs.” (2)

The white paper on Finance, Government of Maharashtra, March 2015,acknowledged that “In 2013 – 14, there were 36,48,959 users of irrigation pumps in the state, majority of them for pumping groundwater, each using about 5,900 units of electricity annually. These pumps are concentrated in specific districts. For example, Solapur has the highest number of pumps (and largest area under sugarcane) and appropriates maximum proportion of subsidy given for farm pumps. It leads to furthering of regional imbalance and strengthening of the water-energy nexus, besides showing the failure in regulating groundwater use at sustainable levels and in an equitable way”. (3)

It is well known that Maharashtra’s soil, water and climatic conditions were never conducive for sugar cane production. It is the legacy of imperial British that we continued even after the independence; even today the industry lives and thrives because of political patronage.

“…. Political interests connected to the sugar baron lobby have resulted in accelerated growth of sugar cane, a highly water intensive crop, cultivated in the areas, which get lesser rain fall than even in the desert state of Rajasthan”. (4)

Sugar cane is also known to consume resources that are supposed to be for other crops. Farmer Ganpat Rao Shinde from Parbhani district is quoted to have said in an article by Rohini Mohan, ‘like the son who gets the larger helping of food, sugar cane gets all the water while other crops wilt’. (5)

What else do you expect?

The resultant soil degradation, increase in the soil salinity, and unjustifiable water consumption by the sugar industry are the consequences of the chain reaction set in motion by the staggeringly large area under sugar cane. This is simply unforgivable. By now, scores of experts, scientists, activists and other concerned persons have cried hoarse about the man made drought in Maharashtra and its linkage to mindless sugar cane cultivation.

Clearly, accruing the political power through sugar empires has become a ruthless, unchallenged and sadly, sole success formula in Maharashtra which has led to this panicky situation that is crippling the state. The 2009 – 14, Congress –NCP government had 13 out of 30 ministers that owned sugar factories or controlled the co-operative sugar factories. (7) Late Sharad Joshi, the renowned Shetkari Sanghatana leader once said, “it is an easy route to becoming a politician since he contributes just 10% of the capital and takes 90% from the farmers to become their leader” (8)

The sugar cane farmers always feel harassed – lower prices one year and arrears the next!

Only the politicians, the bureaucrats, technicians and academicians working in the sugar departments of Agricultural Universities, Sugar Directorate, VSI, etc. seem to be comfortable, in control and pleased with the situation

Refer the same article by Rohini Mohan: “Mardaj village in Prabhani district sits on the bank of the river Godavari, but the river bed is dry (the feeder dam has not released water for some years now) and so are the fields, except if it is sugarcane. In early June, villagers sat quietly in the house of Mukhiram Khare, a 37-year-old sugarcane farmer who hanged himself on the single tree in his courtyard 5 days earlier. ‘He dug a bore last year for the sugarcane, then dug another, and then another,’ says his father Triyambaka Khare” (9)

The question that should come to a curious mind is, ‘despite this dire situation, why do more and more farmers keep planting sugar cane’?

They know that year after year, the political lobby somehow always musters the money to pay the arrears; so, sugar cane becomes an ‘insurance crop’. When the water is assured, again politically, then the farmer does not have to do much for cane cultivation. And of course, there is that sweeter than sugar carrot dangling! The carrot of getting politically powerful some day in future! Sadly rural Maharashtra feels that sugar is the only gateway to political control and allied riches.

The consumer demand for sugar is dwindling and the global sugar production is much more than what can be consumed. Since the year 2012, the opening stocks of sugar in Maharashtra have always been more than 65 lakh tonnes every year. The world sugar market showed 4.38 million tonnes of surplus sugar in 2013 – 14 with a very high sugar stock to consumption ratio of 43.75% which resulted in low world sugar prices. In fact, the ‘sugar situation’ is believed to have caused major devaluation of Brazilian currency. (11) 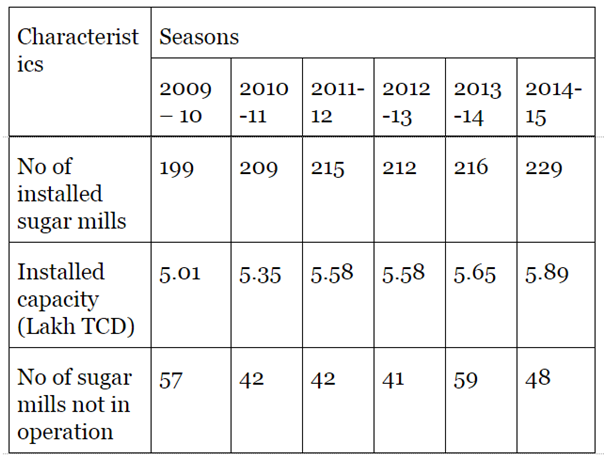 The capacity utilization of the running sugar factories (in-operational sugar mills not considered) has been100% or more since 2011 – 12 to 2014 – 15. It clearly indicates that there are a few factories that are crushing far more sugar cane resulting into average capacity utilization which is more than 100% in recent years. Remember that during the same years, 20% sugar factories were just not in operation. The following table will throw light on this angle: (13) 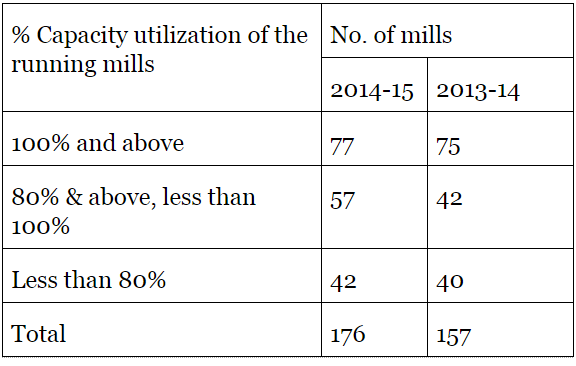 Let us recollect and reflect upon the painful experience of the closure of textile mills in Mumbai. The textile mills were ailing for considerable number of years. Nobody cared for the uncertain future that hanged before the textile workers resulting into total devastation of the worker families, textile mill machinery, the land and buildings of these mills, and so on.

The whole textile industry as well as ministries, planners, management thinkers and subject experts could not anticipate nor did they notice the vastly changing textile technology, changing market demand. Consequently, they miserably failed to take any corrective measures on time.

Let us accept what is inevitable to the sugar industry:

(i) more and more number of sugar mills are going to be in-operational, that too very fast, (ii) already factory workers have not received salaries for more than 6 months in many factories – this is most likely to be continued further – months getting converted into years, (iii) the water problem will not be eased if the area under sugar cane does not reduce substantially and urgently, and (iv) the affected non-sugar sections will revolt strongly – this is actually a sleeping dragon.

Let us draw wise conclusions from the textile experience and implement from the learnings.

Let us plan systematically to minimize the damages and convert the gruesome situations into opportunities through innovative thinking and strong political will.

There is absolutely no wisdom in not closing down more than half of the sugar mills – private or co-operative. Everything, the water problem, the market dynamics, the soil situation, international demand and supply of sugar, the crop diversity issue, the financial health of the sugar factories are all crying out loud that ‘close down majority of the sugar factories and substantially reduce the area under sugar cane’ 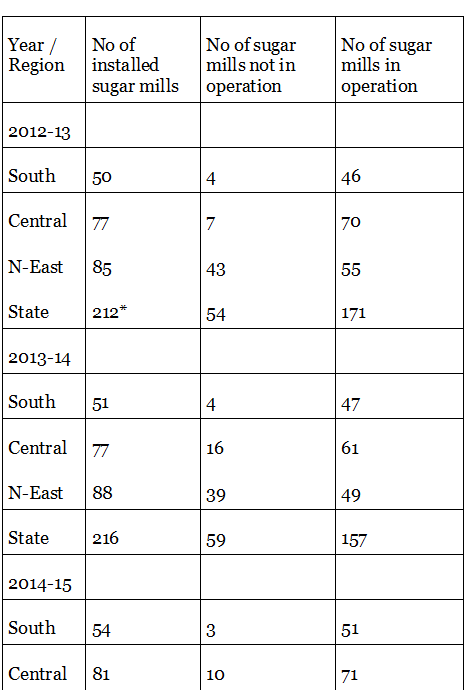 When the closure is being methodically planned, the norm of the technical performance in the last 3, 5 or 10 years will have to be obviously applied to the sugar mills and that will not be fair. The reason being the majority of the sugar factories in the north eastern districts followed by the central districts of Maharashtra have been non-performing and these will have to be closed down.

Though the number of sugar factories can be counted in 2 or 3 digits, that of sugar cane farmers is in 5 digits and the number of people affected by the sugar industry runs in 6 and 7 digits!

All that I would like to earnestly point out is that we should be bothered about all the stakeholders.

In the first 3 – 4 decades after the independence, ‘Sakhar Karkhana’ (sugar factory) was the vanguard in the development of Western Maharashtra; life revolved around the Karkhana. This role of Karkhana is outdated even in western Maharashtra and now we are trying to do the absurd task of replicating the outdated methods of growth in other parts of the state.

Easier said than done when we hear what even young politicians like Amit Deshmukh, the son of late Maharashtra CM, Vilas Rao Deshmukh and the founder chairman of the Vikas Co-operative sugar factory in Latur; he welcomed the establishment of the new mills in the private sector, “the fittest will survive. The private mills will bring in competition and innovative processes.” (15) Latur is one district of worst affected Marathwada.

The socio-economic, climatic and political conditions of every other region in the state have been completely different than Western Maharashtra. Can we not think of different industries / services that can be nurtured as crusaders of growth?

Kerala, the 100% literate state in India was actually an obvious choice for the IT industry in India. Nobody would have been surprised if Kerala had become the hub of IT industry not only of India but of the entire Asia region barring China. For various reasons, Kerala lost the opportunity but did a tremendous job of developing tourism, reviving the Ayurvedic medicines and became a thriving center of Naturopathy in India. Mind you, it required innovativeness, sustained focused efforts and a result oriented approach.

Today a worker in Kerala gets minimum Rs.600/- per day and again, I need not give you any wage related statistics all over India including the most industrialized Maharashtra.

A debate would be in order over what can be done in Vidharba, Marathwada, Khandesh and Konkan. The same would be necessary within each of these regions. Consider the most backward districts in the various geographies. For example, when thinking of Khandesh, think of Nandurbar and Akkalkuwa more than Nashik. Gather and employ all the necessary resources with that Kerala type result oriented approach and create alternatives to sugar factories.

The world is all gates, all opportunities, strings of tension waiting to be struck.

What Price a Mangrove? 5 hours ago

Race Protests In US And Walk Of The Dispossessed In India

China has India in its Crosshairs, We Need to Stand Up