NEW DELHI: The dip in Afghanistan - Pakistan ties that’s to follow Wednesday’s suicide blast in Kabul that killed at least 90 people and wounded 400 others played out between the countries respective cricket boards, with the Afghan Cricket Board (ACB) seeking to "cancel all kinds of cricket matches and mutual relationship agreement with the Pakistan Cricket Board (PCB)".

The attack -- one of the worst terror attacks in recent times in Afghanistan -- took place near several embassies and government offices in Kabul, with casualties likely to rise. Although there was no claim of responsibility for the attack, it comes as the Taliban pushes ahead as part of the annual ‘spring offensive’ -- when better weather enables escalated fighting.

Many in Afghanistan blame neighbouring Pakistan for aiding and abetting terror in the country, by providing a safe haven for the Taliban and linked Haqqani network. Pakistan denies the charge.

Pakistan - Afghanistan ties, therefore, have been closely linked to terror within Afghanistan, with recent violence seeing a further deterioration. The Kabul attack is likely to deal an additional blow to the already tense relationship, with Afghan intelligence agencies mincing no words in pinning the blame on Pakistan for the suicide blast.

The first casualty has been cricketing ties, with the ACB putting out a strongly worded statement that effectively pinned the blame for the Kabul blast on Pakistan. "By killing innocent and destitute people today, the enemies of Afghanistan's peace and stability showed that they are not worthy of friendship and will not change their stance against Afghans," the statement read. 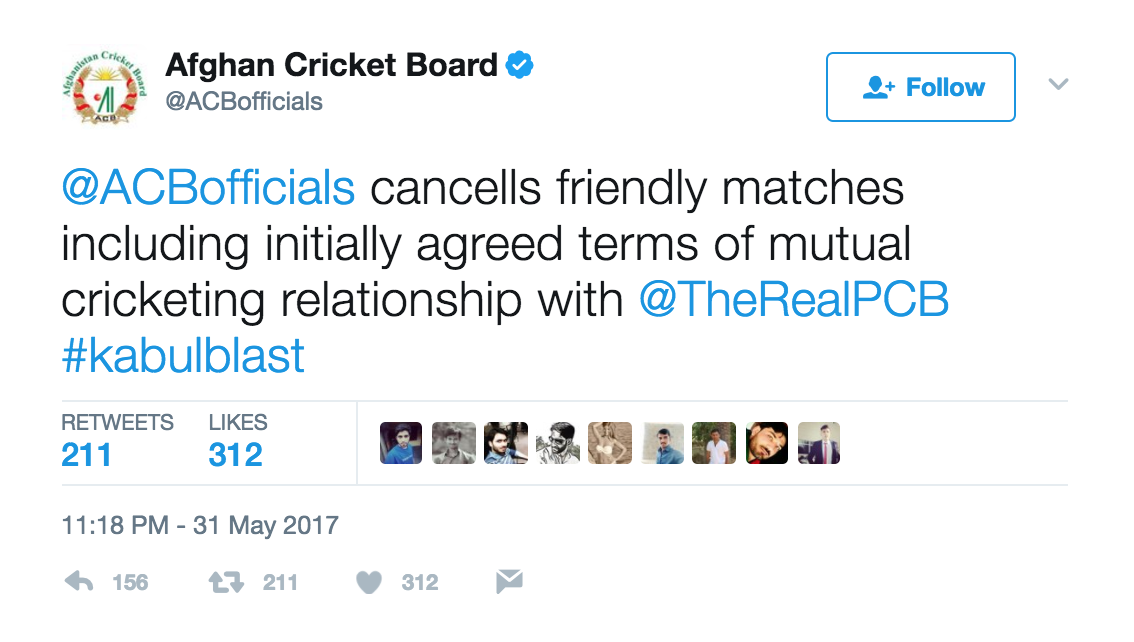 The cancellation of ties comes just a week after an ACB delegation, including its chairman Atif Mashal, visited Lahore. The two countries then agreed on resuming ties at youth and senior levels.

Following the ACB statement that pinned the blame on Pakistan, the Pakistan Cricket Board issued a rejoinder calling the allegations “baseless.” "It is also deeply regrettable that the ACB delegation in Pakistan was at pains to insist that politics should not impinge on cricket but has now turned around and is playing politics by laying the blame for its own troubles and inadequacies on Pakistan," the PCB statement reads.

"The PCB has always encouraged the development of cricket in Afghanistan and millions of Afghan refugees were first introduced to the game in Pakistan.Over the years, the PCB helped cricketers in Afghanistan develop their expertise and an entire generation of Afghan national players honed their cricketing skills in Pakistan."

It’s worth mentioning that neighbours Afghanistan and Pakistan share a unique relationship when it comes to cricket. The sport is one of the rare instances of cooperation between the tense neighbours, as a number of Afghan cricketers have learned to play cricket in Pakistan. Cricket has become increasingly popular in Afghanistan after the overthrow of the Taliban in 2001.

The acrimonious rhetoric between the ACB and PCB is reflective of the tense relationship between the two countries, that has gone through a series of lows and further lows. When President Ashraf Ghani first came to power he signalled a shift, reaching out to Pakistan in a bid to improve relations. Ghani soon after being sworn-in visited Pakistan, and then Pakistan’s army chief and head of intelligence visited Kabul. Delegations from the two countries made visits across the border; six Afghan army cadets were sent to Pakistan for training; military efforts were coordinated across the shared border; and Ghani and Pakistani Prime Minister Nawaz Sharif both issued statements in support of cooperation and bilateral ties.

Ghani’s change in policy was received with skepticism in Afghanistan, with opposing voices growing louder as terror attacks by the Afghan Taliban continued. Ghani was hopeful that Pakistan would use its influence on the Afghan Taliban and bring the group to the negotiating table, but the peace dialogue failed to take off.

As the attacks continued, Ghani’s tone changed, and soon, the new Afghan President was speaking in a language similar to that of Hamid Karzai -- who had been a vocal critic of Pakistan, and under whose Presidentship, relations between the two countries dipped to an all time low.

Tensions escalated between the two countries, and were dealt a huge blow when at least 15 people were killed and several others wounded last month, after a cross-border battle between the two sides broke out during a Pakistani population census near the border.

The area where the census was being conducted remains disputed between the two countries, and Pakistan’s efforts to establish fences and posts along the border have been resisted by Afghanistan. Pakistan has said that the purpose behind fencing the border is to prevent the crossing of militants from Afghanistan into Pakistan, and following a wave of deadly attacks that killed over 100 people in Pakistan in February, Islamabad moved to seal all border crossings with Afghanistan for a month. The move led to a further deterioration in ties, as many in Afghanistan accused Pakistan of having no real motive to close the borders other than to hurt Afghan civilians.

The Kabul attack is the latest incident to be turned into yet another game of ping pong diplomacy, with the people of the two countries bearing the brunt of it all.