Referring to the increasing number of polio cases in Pakistan -- which the World Health Organisation (WHO) recently estimated contribute to more than 80 percent of the world’s polio cases -- Burka Avenger’s creator Aaron Haroon Rashid, said in a video produced by Reuters, “the WHO has declared a medical emergency… there have been 200 cases now… The situation is alarming… So, in this particular case, we decided to tackle the polio issue head on.”

The video attempts to reiterate the importance of the polio vaccine, and highlight the plight of health workers -- many of whom are threatened by militants in their effort to vaccinate children at risk. 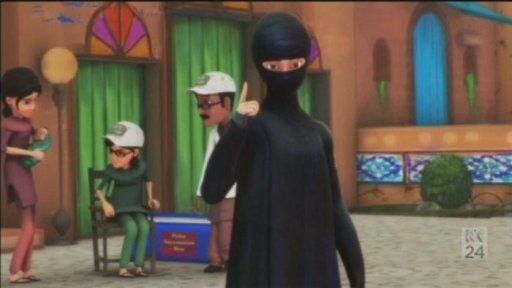 (A still from the special ‘Burka Avenger’ polio episode).

Because of the resistance posed by militants, and correspondingly, family members whose children are still to be vaccinated, polio cases have risen every year in Pakistan. This year, a new strain of polio was identified in Pakistan, with WHO warning that Peshawar has the world’s largest reservoir of the polio virus and that 90 percent of Pakistani polio cases were linked to this highly contagious strain of the disease which is found in Peshawar’s sewers.

The attacks against polio-workers in Pakistan escalated once it became known that the CIA had paid a Pakistani doctor, Shakil Afridi, to fake a vaccination campaign in Abbottabad, to acquire DNA samples from children inside a compound where al-Qaeda leader Osama bin Laden was based. The American intelligence’s scheme, in a bid to prove that bin Laden was in Abbottabad, involved comparing the DNA samples of the children to those of bin Laden’s sister, who had died in Boston in 2010.

This incident exacerbated the distrust of foreign intelligence services in Pakistan, and the Taliban have waged an all-out war against polio workers, repeatedly attacking health teams and denouncing vaccinations as part of a larger western/CIA agenda. The Afridi incident did grave damage to the credibility of the healthcare programme in Pakistan, which has seen previous success as polio figures declined from 350,000 to 250 in a span of twenty-five years.

The CIA came under widespread criticism for jeapordising the campaign. InterAction, a coalition of 200 non-governmental organisations, issued a statement reading: "The CIA's use of the cover of humanitarian activity for this purpose casts doubt on the intentions and integrity of all humanitarian actors in Pakistan, thereby undermining the international humanitarian community's efforts to eradicate polio.”

The distrust was fuelled by conspiracy theories that claim vaccinations are “un-Islamic” or an American ploy to sterilise children. The practice of marking houses that have been vaccinated, in order to differentiate them from houses that are still to be included in eradication efforts, was beset with rumours that vaccinators - accused of being CIA operatives - mark houses to be targeted by US drones.

The Taliban imposed ban on immunization has deprived about 170,000 children under the age of five from receiving polio vaccinations. The WHO states that Pakistan had 91 cases of polio in 2013, compared with 58 in 2012, with many attributing the attacks on polio campaigns which have resulted in the lack of access to people in need of vaccinations as a key reason for this increase.