From Cox Bazar in Bangladesh, Rohingyas Narrate Their Tales of Sheer Horror

COX BAZAR (BANGLADESH): In the desperate scramble to flee military bullets, Rokeya Begum lost track of her husband. With her five children and elderly mother, the three-months-pregnant woman trudged through blinding rain that turned mud tracks over hilly terrain into clay quagmires to cross the international border into the relative safety of Bangladesh.

“It took five days to reach Bangladesh,” she told indiaclimatedialogue.net while recounting her ordeal. Living in a makeshift camp in Moinar Ghona in Cox’s Bazar district, Rokeya Begum doesn’t know the whereabouts of her husband or indeed if he is alive. For now, she is only thankful that her children have escaped the military attack in Bolirbazar of Maungdaw district in Rakhine state of Myanmar. Feeding her kids and mother is the challenge that Rokeya Begum must face every day, with no thoughts of what the future holds for her family.

Such tales of horror abound in the refugee camps spread across Bangladesh’s south-eastern frontier with Myanmar, where over half a million Rohingyas have fled since the latest round of violence erupted in Rakhine on August 25 this year. The stateless community, whom the Myanmar government calls Bengalis and refuses to recognise as citizens, is facing what the UN calls a “textbook case of ethnic cleansing.” The atrocities against the Rohingyas continue despite international condemnation, and amid the implied acquiescence of Nobel Peace Prize winner Aung San Suu Kyi, Myanmar’s State Counsellor, a position akin to a Prime Minister.

The atrocities directed against the Rohingya are widely viewed as a religious conflict between Myanmar’s dominant Buddhist population and the mostly Muslim people living in Rakhine in south-western Myanmar, the second poorest state in that country. In the continuing humanitarian crisis due to the massacres and mass migration, what is sometimes lost is that the ouster has other dimensions as well — an appropriation of natural resources by the state and the prospect of supernormal profits from huge planned infrastructure development by the rich and the influential.

Like Rokeya Begum, Rohingya refugees are flocking daily to the temporary settlements in the districts of Cox’s Bazar and Bandarban in Bangladesh, joining the 307,500 refugees already living in cramped camps. As the influx shows no signs of stopping, the Bangladesh government and UN agencies are stretched to the limit.

An advisory commission led by former United Nations Director General Kofi Annan released its final report on Rakhine state, recommending a slew of measures to ensure peace and stability in the region, but it seemed to have no effect on the continuing violence. “Unless concerted action — led by the government and aided by all sectors of the government and society — is taken soon, we risk the return of another cycle of violence and radicalisation, which will further deepen the chronic poverty that afflicts Rakhine State,” Annan had prophetically said on August 24. The next day the Arakan Rohingya Salvation Army (ARSA) coordinated an attack on 30 police check posts, and the Myanmar military reacted with wholesale massacre and widespread burning of villages and settlements.

The advisory commission’s report, though, also hinted at economic aspects that lurk behind the story and are rarely acknowledged. “Although Rakhine is rich in natural resources, the development of extractive industries — such as oil and gas-related investments in Kyawkpyuh — has not generated a significant number of new jobs nor other benefits for local residents,” the advisory commission said in its final report entitled Towards a Peaceful, Fair and Prosperous Future for the People of Rakhine. “Both Rakhine and Muslim communities feel marginalised and disempowered by decisions taken in Naypyitaw (the Myanmar capital).”

Although the condemnation implied in the commission’s view is mildly expressed, it indirectly points to political and economic interests as contributing factors to the forced displacement of not just the Rohingyas but also the exploitation of other minorities in Myanmar, such as the Karen, the Kachin, the Shan and the Chin.

In 2011, Myanmar instituted political and economic reforms and opened up the country, dubbed as Asia’s final frontier, for foreign investment. Elections in 2015 led to Suu Kyi’s National League for Democracy (NLD) taking office in April 2016. Several countries, including India and China, showed eagerness in investing in development projects across Myanmar.

In Rakhine, Chinese and Indian interests revolve around the construction of infrastructure and pipelines. These projects are touted as providing employment to local residents and generating oil and gas revenues for Myanmar. 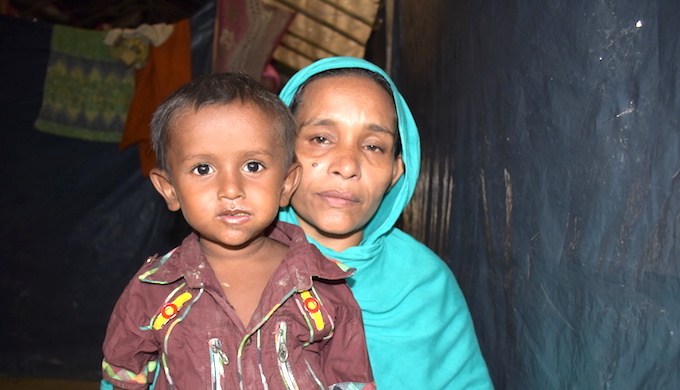 Rokeya Begum has fled to Bangladesh with her children from Bolirbazar in Maungdaw district of Rakhine state in Myanmar. She doesn’t know whether her husband is still alive (Photo by Zobaidur Rahman)

India is implementing several infrastructure projects in Myanmar that are aimed at accessing Myanmar’s rich natural resources, improving connectivity between the two neighbours, and facilitating bilateral travel and trade. The 1,400km India-Myanmar-Thailand (IMT) highway links Moreh in the northeastern Indian state of Manipur with Mae Sot in Thailand via Kalewa and Kalemyo in Myanmar. It will be the first overland link between India and Southeast Asia and passes through Rakhine.

China is investing in a USD 7.3 billion project to develop a seaport in Rakhine, which will advance China’s One Belt One Road (OBOR) programme and connect the country to the Bay of Bengal. It also has plans for an industrial park and a special economic zone in the region. The economic interests of the Asian giants are seen as the main reason for their tacit support of Myanmar government in the Rohingya crisis.

Most Rohingyas coping with the trauma of flight into Bangladesh are unaware of many such development projects that run through their land. But some do have an inkling of the goings on.

The memories of terror are still fresh in the mind of Mohammad Ismail, who fled to Balukhali camp in Ukhia administrative block, Cox’s Bazar, a month ago. “My uncle, who used to live just beside our house, was killed by the military,” he said. “Lots of women in our village were raped and killed. They burnt our houses and we had no other way to escape the violence. Finally, we fled to Bangladesh to save our lives.”

Hailing from a village near Maungdaw – the westernmost town in Myanmar, right on the Bangladesh border – Mohammad Ismail suspects that the pogrom by the military and Buddhist militia has motivations other than religious. “We have been living in our village for generations. Last year, the township chairman (mayaka in the local dialect) came to our village and asked us to go away from our village,” he told indiaclimatedialogue.net. “They said they need our land because they would construct a highway. They acquired our land in the name of development.”

Land grabs carried out by the government’s army-backed cronies and foreign companies for constructing large strategic projects continue to grow in Myanmar, according to Environment, Conflict and Cooperation, a global online platform.

The massive development planned in Rakhine also has grave implications for the environment. “In light of the (Rakhine) state’s vulnerability to the effects of climate change, the Commission recommends that the government urgently step-up efforts to strength the capabilities of communities to adopt climate resilient options, and to improve the state’s irrigation systems,” the Kofi Annan report said.

Meanwhile, the number of newly arrived Rohingya people has reached 607, 735, according to the Inter Service Coordination Groups (ISCG), which consists of UN and other international organisations working in the Cox’s Bazar area. They have been living in different camps and host communities in four sub-districts of Cox’s Bazar. Among them, 53% are women and girls, 4% are over 60 and 29% are under five. The majority of this population are from Maungdaw district of Rakhine state.

The Rohingya refugees are living in terrible conditions and need immediate life-saving assistance, including clean drinking water, sanitation and hygiene, essential food and emergency supplies. More than 70% of the newly arrived have no shelter and only 50% have access to safe drinking water.

Last month in Geneva, the UN’s refugee agency called for the international community to double its humanitarian outreach in order to respond to the burgeoning refugee situation in southeastern Bangladesh. The Bangladeshi government announced last week that it planned to build separate shelters for some 6,000 Rohingya refugee children who had arrived across the border alone.

The Rohingya refugees are also setting up shelters in reserve forests in Kutupalong and Balukhali. They have little option but to cut down trees and damage forests. According to the experts working in wildlife conservation, many parts of the 30,000 acres of forestland in Ukhia have already been razed to the ground.

As the horror of genocide and mass migration continues, the stateless Rohingyas are staring at a bleak future. Rokeya Begum of Bolirbazar in Rakhine may have saved her children for now, but the abysmal conditions at the refugee settlements, which organisations engaged in relief operations are struggling to cope with, is sure to pose the danger of disease and pestilence to them. And, even if they survive present travails, nobody seems to have any idea of what the future may hold for them.

(Cover Photograph:Newly arrived Rohingya families at Teknaf camp in Cox’s Bazar district of Bangladesh. The exodus of people from the Rakhine state in Myanmar shows no signs of slowing down (Photo by Zobaidur Rahman))