President Abdulla Yameen still to speak to the country

COLOMBO: A surprise challenge from an unexpected quarter has rendered the Maldivian President Abdulla Yameen speechless.

With the Supreme Court suddenly turning against him and ordering the immediate release of jailed opposition leaders, the loyalty of the police brought into question, and the international community ganging up against him once again, Abdulla Yameen is stunned for the first time since he came to power in 2013.

He is yet to speak to the people of his country about Thursday’s surprising and extremely unsettling order of the Supreme Court to immediately release from prison top opposition leaders including former President and arch rival Mohamed Nasheed.

Government spokesman, headed by the Attorney General Mohamed Anil, have indeed spoken to the media, but they have been uncharacteristically defensive and weak in their responses.

“We will abide by the court’s order but we have some issues with the order which we are sorting out with the Chief Justice,” said Mohamed Anil. He said he had spoken to Chief Justice Abdullah Saeed and the Prosecutor General, Aishath Bisham, is working on the cases to see how to implement the release order.

The ticklish issue, according to Anil, is the nature of the charges against the top leaders, which are grave. They had been convicted for terrorism, embezzlement and corruption, he pointed out.

“What are the long term consequences of releasing persons who had been sentenced for these crimes? is the question the country has to ponder,” Anil said.

However, the Supreme Court had only asked for release ahead of a fair trial. It was not an order for an unconditional release. 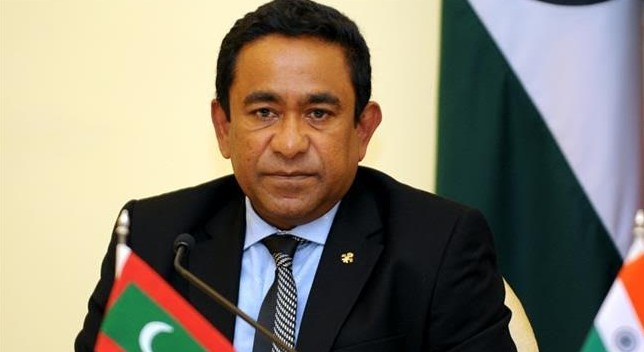 The court observed that the earlier trials were not fair. The trials against Nasheed and eight others had been “conducted based on political motivations; and in violation of the constitution and the international human rights covenants acceded to by the Maldives,” the court said.

It ordered their immediate release pending a retrial.

The court had also annulled its earlier anti-defection ruling and ordered the country's electoral watchdog the Elections Commission, to re-instate the dozen MPs disqualified over the ruling.

The Supreme Court said the anti-defection ruling was issued as a “temporary solution” to the constitutional dispute case filed by the State but insisted that the relevant authorities have failed to bring to effect an anti-defection law specified in the ruling.

Meanwhile, international pressure on Yameen, always in the background, is coming to the fore. The UN rights chief on Friday expressed concern over the 'heavy-handed' reaction by security forces in the capital Male against opposition supporters celebrating the Supreme Court order.

The spokesperson for the UN High Commissioner for Human Rights, Rupert Colville in a statement that the UN rights chief is closely monitoring the “extremely tense” situation in the Maldives in the aftermath of the court order particularly the “reactions of the “government, military and police.”

The statement said: "We are concerned by what appears to be an initial heavy-handed reaction by security forces in the capital Malé against people celebrating the Court’s decision, and urge them to show understanding and restraint, and to act in full accordance with international laws and standards governing the policing of protests and other forms of public assembly."

"We also urge all those celebrating, or protesting, to do so in a peaceful fashion."

US Ambassador to Maldives Atul Keshap on Twitter welcomed the Supreme Court order to the release of all political prisoners and ensure their fair treatment under law.

"I urge the government and security services to respect this ruling, which bolsters democracy and rule of law for all Maldivians," Keshap added.

In its reaction, the Indian Ministry of External Affairs said: “ We have seen last night’s order of the Supreme Court of Maldives releasing all political prisoners. In the spirit of democracy and rule of law, it is imperative for all organs of the Government of Maldives to respect and abide by the order of the apex court. We also hope that the safety and security of the Indian expatriates in Maldives will be ensured by the Maldivian authorities under all circumstances.As a close and friendly neighbour, India wishes to see a stable, peaceful and prosperous Maldives.We are closely monitoring the situation.”

Sri Lanka ,which has good relations with both Nasheed and Yameen has urged all parties in the Maldives to uphold the rule of law and find a peaceful solution to the ongoing political crisis.

"Sri Lanka is observing the evolving situation in the Maldives. We urge all parties to uphold the rule of law and the constitution, and find a peaceful solution to the current situation," the Foreign Ministry said in a statementon Saturday.

So far, Yameen has shown restraint except for removing the police chief who jumped the gun and immediately after the Supreme Court order stated that the police would implement the order.

Earlier, the Elections Commissioner had resigned without giving any reason, though it is said that he fears the elections may be rigged. The government which wants to re-establish the commission, has called for applications for the post of commissioners.

It is very important for Yameen to solve the current problem in a peaceful manner as any violence or oppressive action will only irretrievably alienate the international community.

As on date, China is Yameen’s lone external supporter. He had allegedly given 16 to 17 islands to that country, besides signing an FTA and handing over several big ticket development projects to it.

But as it did in Sri Lanka, China could well watch Yameen going down and use its financial strength and value neutrality to come to terms with the next regime.

Yameen has the crucial Presidential election to fight in September this year. Under the present circumstances it may be hard for him to prevent his bête noire Nasheed from contesting as the candidate of a united opposition.

It will be harder for Yameen to win the election if he is facing a united opposition. Yameen may have united the opposition in a way that the opposition leaders might not have!