The President and Me: The Irrelevancy of Presidency in Myanmar

The resignation of Myanmar's first civilian President Htin Kyaw hit headlines, and there have been a flurry of political tea leaf readings among the chattering classes. When he was sworn in March 2016 in I wrote a welcoming and uncharacteristically optimistic essay for the Guardian. Optimism has never been warranted, insofar as my 30 years of involvement in my country's sordid affairs.

I actually knew the man who replaced Htin Kyaw with immediate effect, when my own delusions compelled me to think that there are generals who were open-minded and wanted to "do the right thing".

On this I have been proven categorically wrong. For all my "good generals" have been involved in the genocide as major decision makers in the nation's highest echelon.

Whether ex-head of military intelligence and the ageing despot Than Shwe's relation ex-Lt-General Myint Swe (in picture with me below taken at the War Office in Nov 2005), or Suu Kyi's pliant and pliable aide civilian Htin Kyaw, Myanmar's Presidency under this Constitutional arrangement in Myanmar is IRRELEVANCY, let me state emphatically again. He was made commander of the most important command - Rangoon - and was involved in brutalizing monks who rose up against the military rule in Saffron Revolt in 2007.

Now the majority of monks and nuns appear to be declaring their support for their former torturers and killers, all soaked in blinding fear and loathing of Rohingyas and Muslims in general: the public and Suu Kyi are not that different in this regard: they support their common captors in the name of "anti-terrorism" and national defence, whereas the biggest Terrorist has been the Military itself since 1962, or for the non-Bama and non-Buddhists, since independence from Britain in 1948. 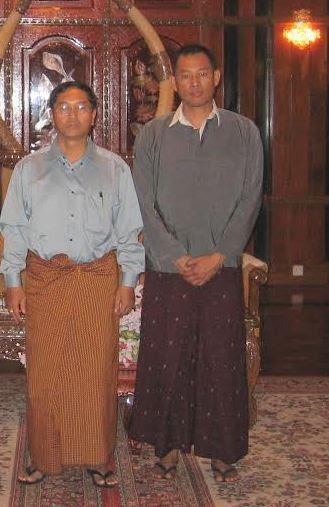 But the cartoon in Irrawaddy from 2016 summed up the essence of Htin Kyaw's Presidency - with Suu Kyi as the self-proclaimed "above-the-president" leader, while she herself has to know the limits of her own 'de facto' power.

Whatever the explanation behind the resignation of Suu Kyi's puppet, poor health or others, the plain fact is under the military's 2008 Constitution - designed to keep the Armed Forces and its Commander in Chief - above the Law- and society - Presidency is irrelevancy.

Yes, there are differences between Senior General Min Aung Hlaing (or any military leader) and Suu Kyi - both of whom are respective dictators and neo-Totalitarian in their respective military and political institutions - in the area of reforms. Suu Kyi is being defeated so severely on her promised democratic transition: the only transition under her leadership is towards the ever-shrinking so-called civil society space - and worse, towards societal Fascism.

Where the military and Suu Kyi are on the same wavelengths, more or less, is in the majority Bama - and non-Bama relations and on Islamophobia-anchored genocide of Rohingya.

The situation of the Rohingyas particularly in refugee camps in Bangladesh got major media spot light with the Aussie actress Cate Blanchett doing a 12-minutes interview on CNN.

Her interview touched on Suu Kyi's role, the "deeply upsetting" nature of horrific tales she personally heard from Rohingya survivors, her view on her own Australia's "inhumane" off-shoring of war-fleeing refugees and asylum seekers, etc.

The actress issued the following call for increased aid after her visit to Kutapalong camps in Cox's Bazaar. Goodwill Ambassador Cate Blanchett calls for increased aid for Rohingya refugees After recent visit to Bangladesh, Blanchett says more international support for displaced and host communities is urgently needed ahead of monsoon rains.

Meanwhile back in her continental country, the more progressive Australian lawyers are working on reviving the Pinochet Precedent. Here is the VICE's write up about their work.

On a different but related note, Columbia Journalism Review runs a piece where it accurately paints Myanmar journalists as generally part of the dissemination of genocidal racism.

Everyday forms of racism do NOT germinate potently and violently without state involvement and state-approved acts of mass mobilization.

This is precisely the reason I have concluded that Myanmar civil society - for lack of a better word - has succumbed to the extremely deadly strain of genocidal racism towards Rohingyas in particular and Muslims in general.

All the major pillars of Myanmar, the NLD, the mass media, the Sangha or Buddhist Order and the most organized and powerful Armed Forces, are FOR completing what the Commander in Chief Senior General Min Aung Hlaing openly declared in September 2017 - in the midst of the exodus of the Rohingya - as "the unfinished business" - that is, the presence of Rohingya as an ethnic community on their own ancestral borderlands next to Bangladesh.

(Zarni is a democracy advocate, Rohingya campaigner, and a former research fellow at the London School of Economics. He lived and worked in the United States for 17 years. In 1995 he founded the Free Burma Coalition and was its director until 2004. He is now living in exile not allowed to return to Myanmar)