It's a Sombre Christmas in Pakistan

NEW DELHI: As Pakistan grieves the loss of 148 people, mostly children, following a Tehreek-i-Taliban Pakistan (TTP) attack on an army run school in Peshawar, Christmas festivities in the country are reiterating the importance of peace and unity.

These images of Christians dressed as Santa Claus at a rally in Karachi to show support for the victims of the Peshawar attack are indicative of the mood in the deeply divisive country. Christians -- a minority group -- have faced routine attacks, a recent case being when a Christian couple was burnt alive in a brick kiln in Kot Radha Kishan for allegedly desecrating pages of the Holy Quran. The woman, mother of three, was pregnant. 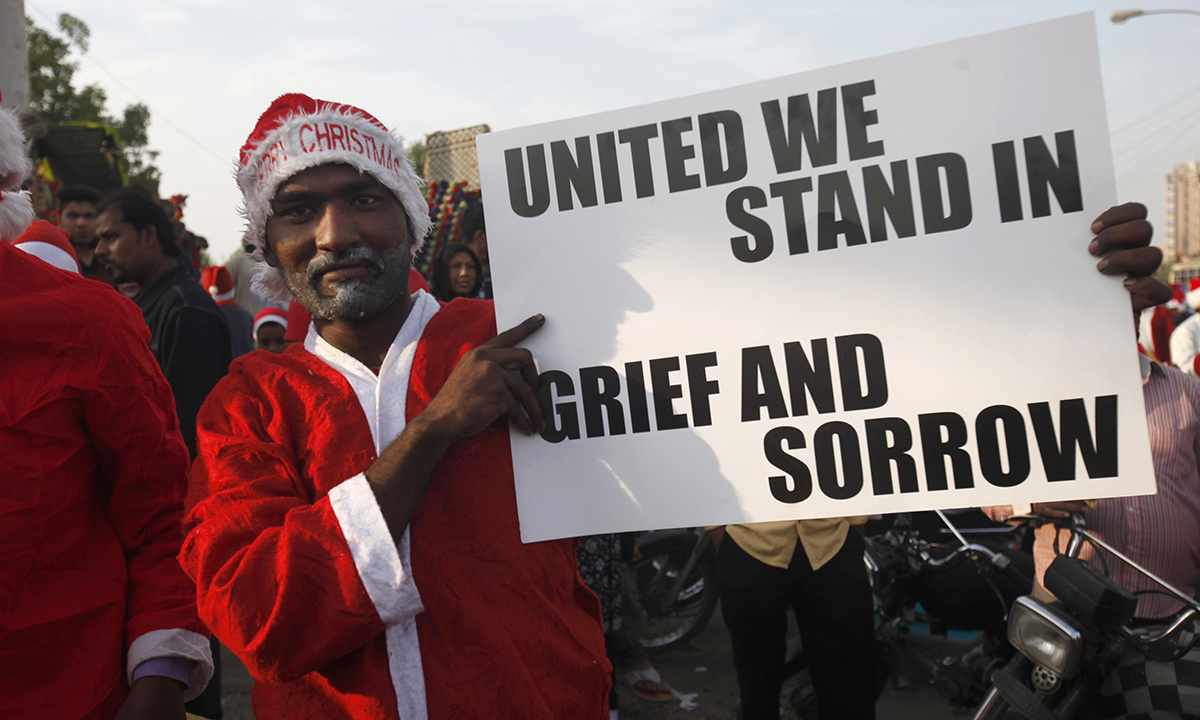 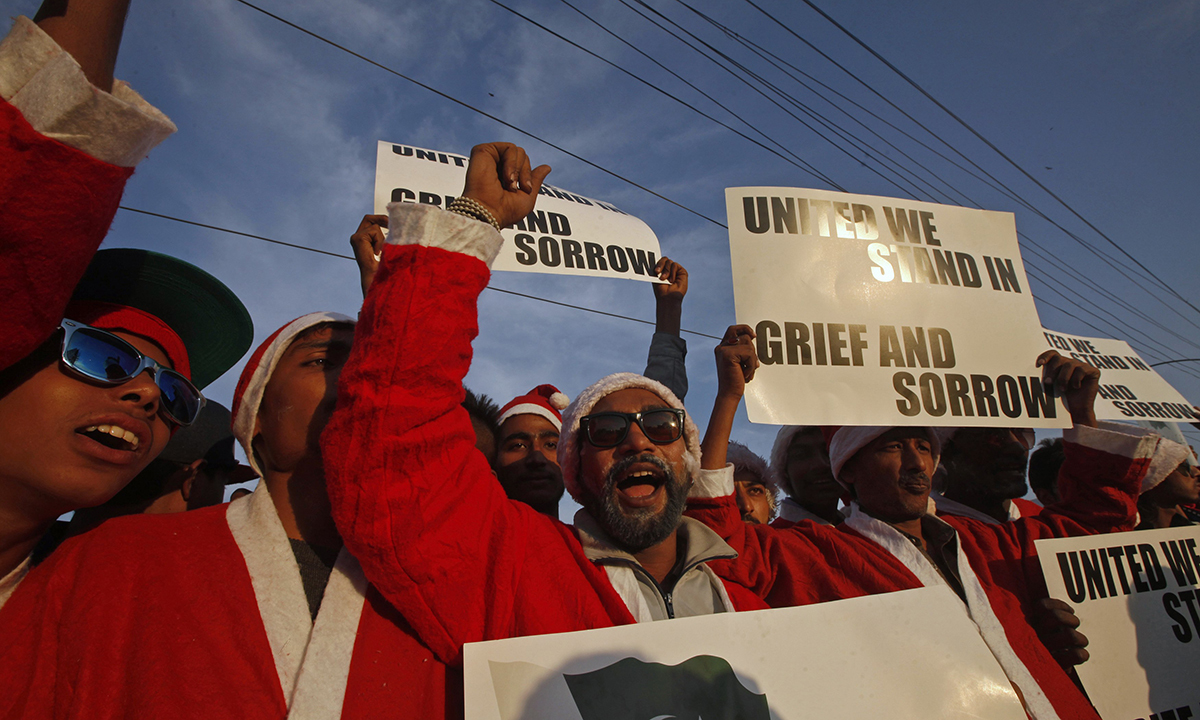 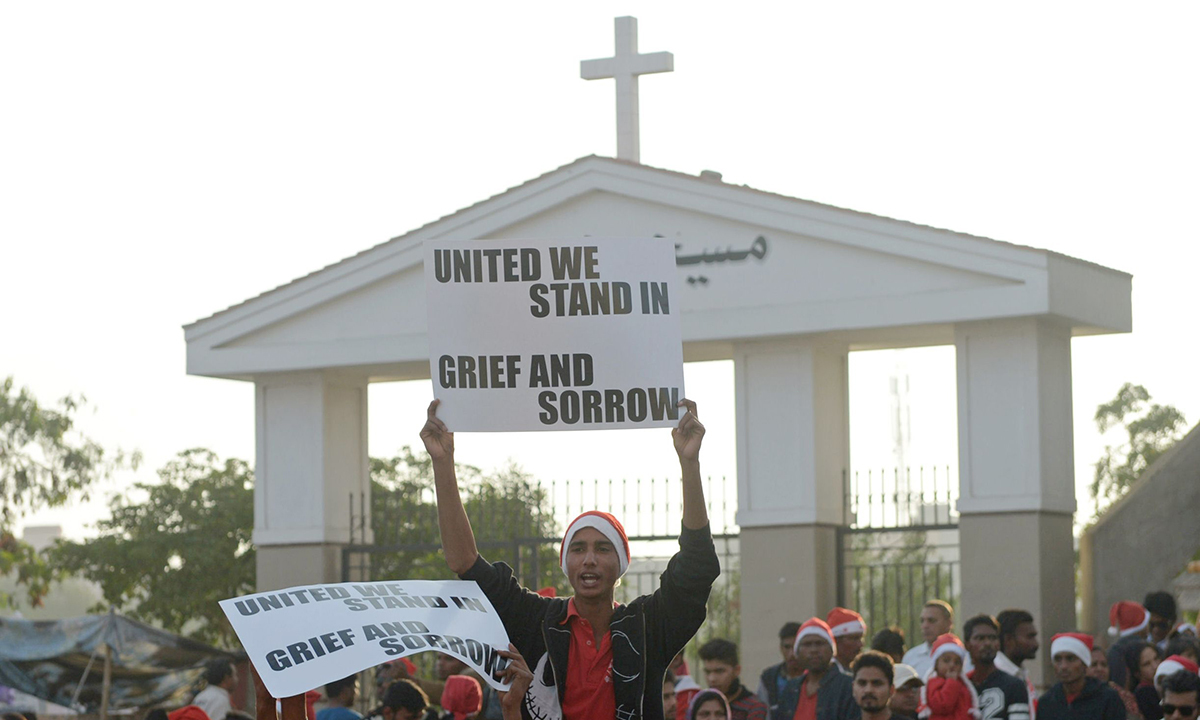 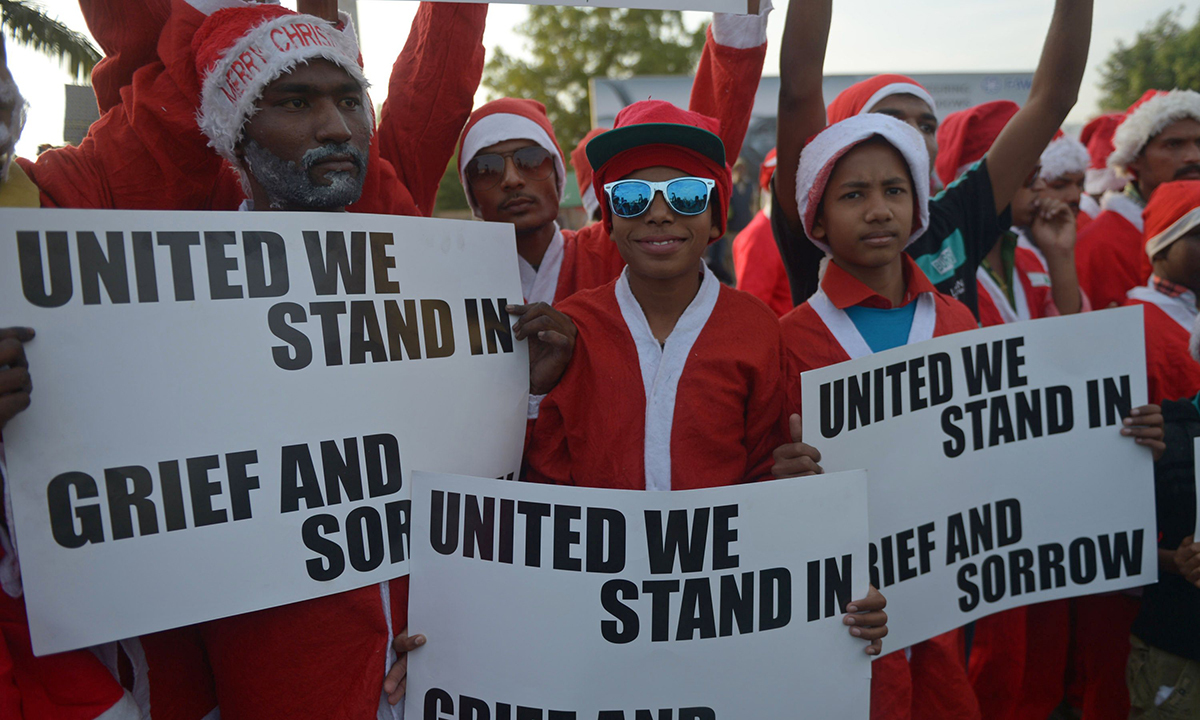 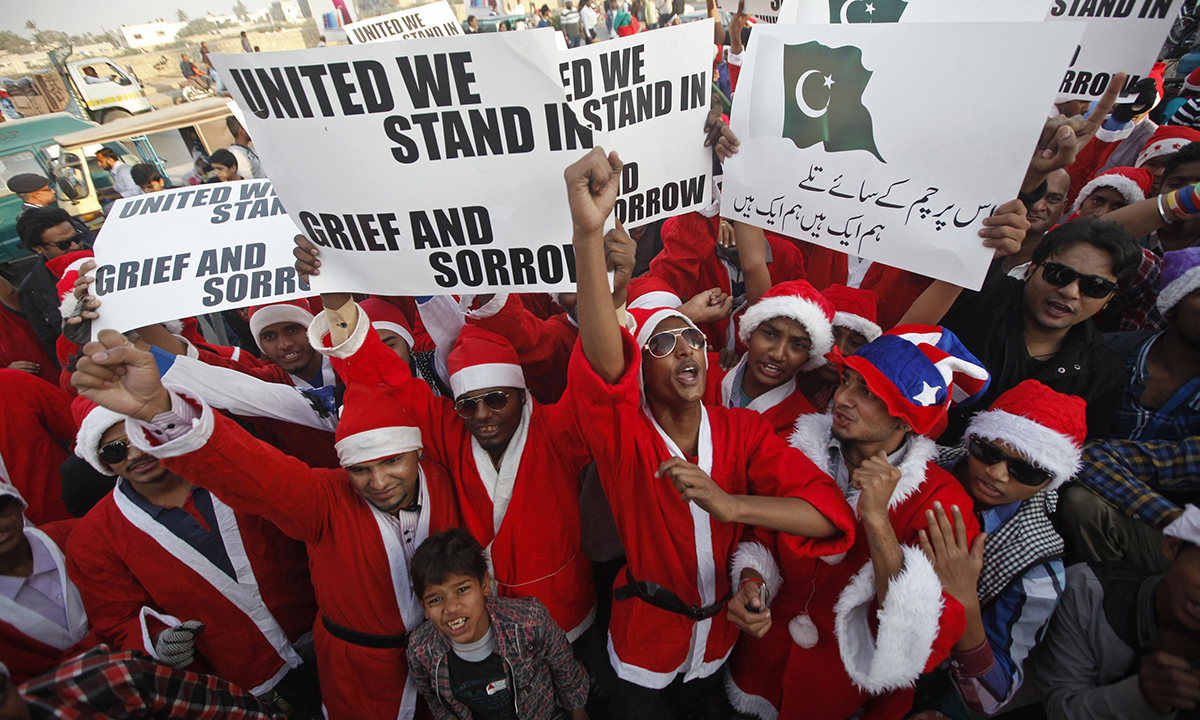 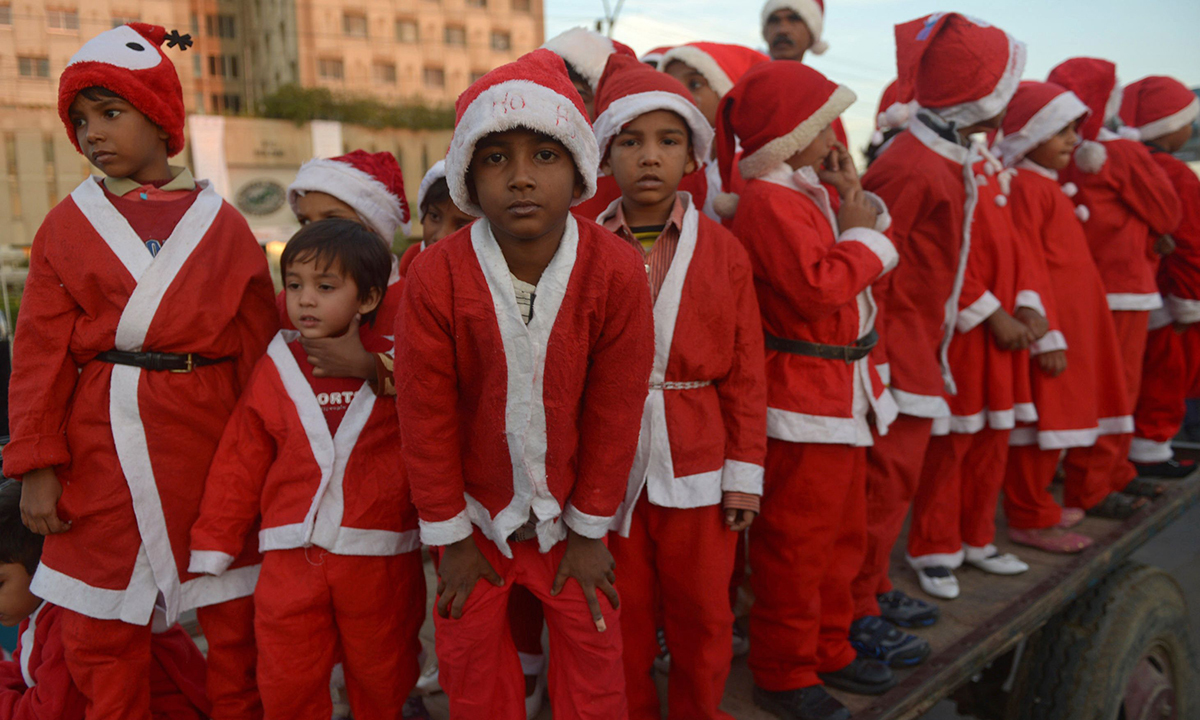 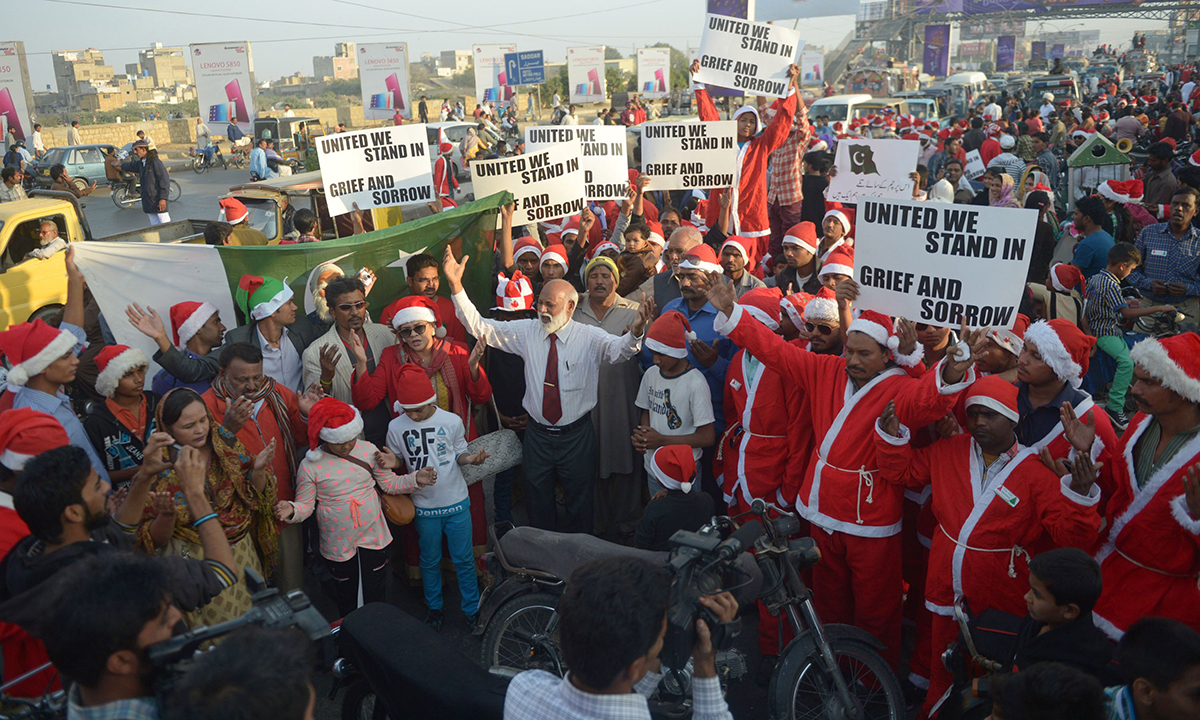 In the incident noted above where the Christian couple were burned to death, a 000-strong mob surrounded a room where the couple -- who were bonded labourers in the village -- had taken shelter. The mob tore down the tin roof and tortured the couple before dragging them to a kiln and shoving them into a furnace. According to Pakistani media reports, police did try to intervene, but the mob held five policemen hostage as it continued on its rampage.

One of the most brutal attacks was in 2013, when twin blasts at Peshawar’s All Saints Church killed 90 people and over a hundred were injured.

In another incident March 2013, several thousand Christians were forced to flee their homes in Lahore following allegations of blasphemy against a local resident, Sawan Masih, as a mob of thousands looted and burned homes and churches.

It is not just Christians who are targeted in Pakistan. Human Rights Watch (HRW) report released a few months ago said that the half-million members of the Hazara community -- a Shia minority -- in Quetta live in fear, compelled to restrict their movements, leading to economic hardship and curtailed access to education and employment, the report says. This oppressive situation has prompted large numbers of Hazara to flee Pakistan for refuge in other countries.

Previously, HRW recorded at least 450 killings of Shia in 2012, the community’s bloodiest year; at least another 400 Shia were killed in 2013. While sporadic sectarian violence between Sunni and Shia militant groups has long persisted in Pakistan, attacks in recent years have been overwhelmingly one-sided and primarily targeted ordinary Shia going about their daily lives.

In January 2014, a bomb targeting a bus of Shia pilgrims returning from Iran in Pakistan’s troubled Balochistan province, resulting in 22 casualties, was a recent reminder of the erosion of the country’s plural fabric.

According to a 2014 HRW report, 400 Shias were killed in 2013 in targeted attacks across Pakistan. At least 200 Shias, mostly from the Hazara community, were killed in Balochistan in and around the provincial capital of Quetta. In January 2013, a suicide bomb killed 96 Hazaras and injured at least another 150. In February 2013, a bomb in a vegetable market in Quetta’s Hazara town killed 84 and injured 160. In March 2013, 47 Shias were killed and 135 were injured in Karachi when a Shia-majority neighbourhood was targeted.

Additionally, Ahmadis -- who consider themselves Muslim, but are categorised as non-muslim under the constitution for disputing the claim that Prophet Muhammad was the last messenger of Islam -- face routine attacks. The community has been banned from mosques in Lahore as groups accused them of “posing as Muslims.”One of the most violent attacks against the Ahmadis was in 2010, when Taliban insurgents attacked two Ahmadis mosques in Lahore killing more than 85. In addition to violent attacks, the minority sect is often targeted by the use of the blasphemy law against them, a recent example being the arrest of Masood Ahmad, a member of the Ahmadi sect, after he was secretly videoed reading a translation of a verse from the Quran earlier this year.