By Girls, For Girls---Nepal's Teenages say No to Child Marriage

Rashmi Hamal is a local heroine who helped to save her friend from an early marriage.

BAJURA, Nepal, (IPS): If not for a group of her school friends coming to her rescue, Shradha Nepali would have become a bride at the tender age of 14.

Hailing from the remote village of Pinalekh in the Bajura District of Nepal’s Far-Western Region, 900 km from the capital, Kathmandu, the teenager was a likely candidate for child marriage.

“We are not afraid anymore because a majority of our community members now want to fight against child marriages." -- 16-year-old Rashmi Hamal, president of the all-girls Jyalpa Child Club in Far-West Nepal

Her family of six survive on an income of less than a dollar a day – subsisting largely off the produce grown on their tiny farm and scraping together a few extra coins working as underpaid daily labourers.

Mahesh Joshi, coordinator of the local non-governmental organisation PeaceWin, tells IPS that such abject poverty is one of the primary drivers of early marriage in Nepal, a choice taken by many adolescent girls with few prospects beyond a lifetime of hard work, and hunger.

Nepali herself tells IPS she was “unaware of the consequences” of her decision at the time.

Had her friends not intervened, she would have joined the already swollen ranks of Nepal’s child brides – according to a 2013 study by Plan Asia and the International Centre for Research on Women (ICRW), 41 percent of Nepali women between the ages of 20 and 24 were married before the legal age of 18.

The United Nations Children’s Fund (UNICEF) has classified Nepal as one of the world’s top 10 countries with the highest rates of child marriage. But now, thanks to an all-girls-led initiative around the country, the tide may be about to turn.

South Asia is home to an estimated 42 percent of the world’s child brides, with Nepal ranked third – behind Bangladesh and India – according to a study by the United Nations Population Fund (UNFPA).

A myriad of causes fuels child marriage in Nepal, home to an estimated 27.8 million people, of whom 24 percent live below the poverty line, says the World Bank.

Nepal’s National Women’s Commission believes economic, social and religious factors all play a role. In the country’s southern Tarai belt, for instance, continuation of the dowry system keeps the practice of child marriage alive. The younger the girl, the less her parents are expected to pay the groom, forcing many to part with their daughters at an ever-younger age.

Others simply choose to marry off their daughters so they have one less mouth to feed.

And while girls’ education is gaining more importance, it is still not considered a priority among rural, impoverished communities – UNICEF says the basic literacy rate among women aged 15-24 is 77.5 percent, a number that falls to 66 percent for secondary school enrolment.

Early marriages have been recognised, internationally and domestically in Nepal, as a violation of girls’ basic human rights, and a practice that has hugely negative repercussions across the board.

“Young girls who are underage when they marry are likely to suffer from a series of health and psychological problems,” explains UNFPA Nepal Deputy Representative Kristine Blokhus.

“There is a real risk of death during delivery, and even if a young girl survives, she may face life-long health problems,” the official tells IPS.

Child marriage severely limits a girl’s future prospects, often sealing her access to labour markets and condemning her to a lifetime of dependence on her husband or his family.

Experts say this is the beginning of a cycle of disempowerment, wherein a girl with few choices becomes trapped in a situation where limited options dwindle ever further.

When initiatives to fight against the practice gain ground, it is cause for celebration among activists, policy-makers, and families who opt for child marriage as a last resort in the face of extreme hardship. 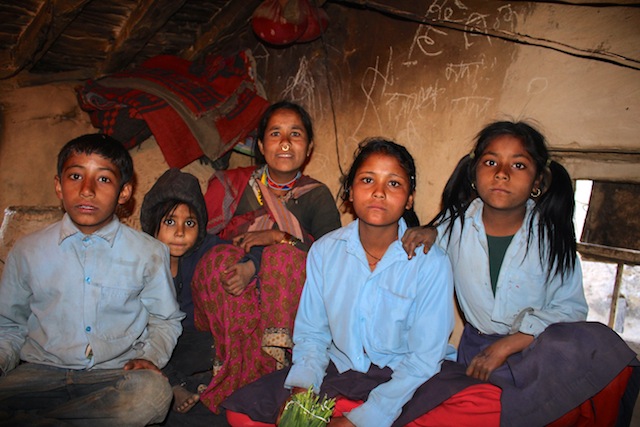 Shradha Nepali nearly became a bride at the age of 14. She was saved by an intervention from a local all-girls club that fights against child marriages. Credit: Naresh Newar/IPS

The district of Bajura, where Shradha Nepali and her friends live, is leading the way on these efforts, with communities across the district competing to declare their respective villages ‘child marriage-free zones’: a bold statement against an age-old practice.

Bajura is located in the Far-Western Region of Nepal, home to some of the country’s most remote and developmentally challenged villages; incomes here are low and child marriages are correspondingly high.

Changing attitudes here is not easy, but that hasn’t stopped girls like 16-year-old Rashmi Hamal, president of the Jyalpa Child Club in the remote Badi Mallika Municipality, from trying.

“We are not afraid anymore because a majority of our community members now want to fight against child marriages,” Hamal tells IPS.

She is one of 10 girls who came together in 2014 with the help of PeaceWin and a youth-led agency called Restless Development, with support from UNICEF, to strategise on how best to stem the practice once and for all.

“These girls are local heroes; they have really proven themselves [in their] persistent educational campaigns, and by inspiring their parents to join their cause,” says Hira Karki, a local social mobiliser from PeaceWin.

It was this club that rescued Nepali from her marriage, shortly after she ran away from home. Although the girl’s mother doesn’t fault her for wanting to flee, she is visibly relieved to have her daughter back, and determined to make her stay.

“I cannot blame her [for running away] because she wanted to escape hardship at home. I [now] hope to support her in every way possible,” the 35-year-old mother tells IPS.

Today, Nepali is one of the club’s most active campaigners against child brides. Their success is tangible: over 84 schools in Bajura and the neighbouring districts of Kalikot, Accham and Mugu have launched similar initiatives in the last year.

“The best part of anti-child marriage activism here is that we have campaigners from our own community who live here and get the chance to educate their own adult members without antagonising them,” a local school principal, Jahar Sing Thapa, tells IPS.

Though small, each club is contributing to the country’s overall efforts to stem the practice. In the past five years, UNFPA says the rate of child marriage has declined by 20 percent.

While independent, local efforts are praiseworthy, they alone will not be adequate to tackle the problem at a national scale.

“We have learnt from our own experience that simply raising awareness against underage marriages is not enough,” UNICEF Nepal’s Deputy Representative Rownak Khan tells IPS in Kathmandu, adding that a multi-sector approach involving financial literacy, life-skills training and income-generation support for adolescent girls will all need to become part of the country’s arsenal against early marriages.

All these services are now core components of the government’s national level ‘Adolescent Development Program’, initiated in 1998.