NEW DELHI: Eight million people have been affected by the massive 7.9 magnitude earthquake in Nepal, the United Nations says, as the death toll climbs to over 4000. How much higher the toll rises will depend on the condition of vulnerable mountain communities that rescuers are working to reach.

"According to initial estimations and based on the latest earthquake intensity mapping, eight million people in 39 districts have been affected, of which over two million people live in the 11 severely affected districts," said the most recent report from the UN Office of the Resident Co-ordinator. 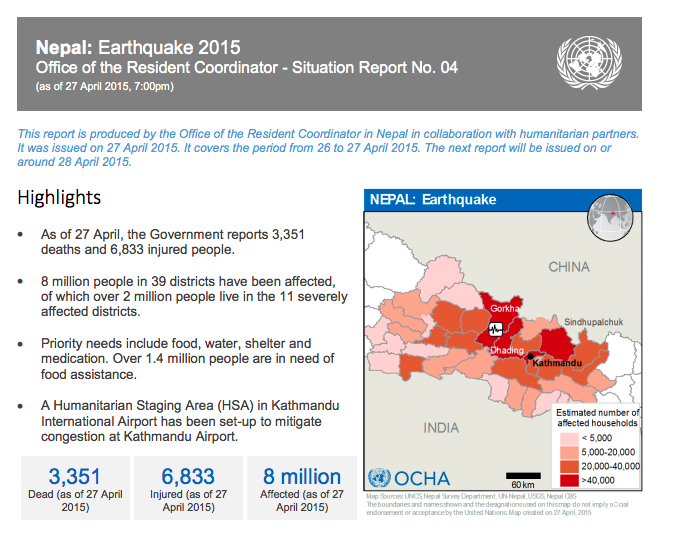 According to early indications, 1.4 million people are in need of food assistance. Of these, 750,000 people live near the epicenter in poor quality housing. Impact on agriculture based livelihoods and food security is expected to be extremely high, the UN report said.

Landslides and avalanches have hampered accessibility, with reports indicating that many communities perched on mountainsides are devastated and struggling to cope.

"There have been nearly 100 earthquakes and aftershocks, which is making rescue work difficult. Even the rescuers are scared and running because of them," said Kathmandu district chief administrator Ek Narayan Aryal to AP.

The United Nations said hospitals in the Kathmandu Valley were overcrowded and running out of emergency supplies and space. There have been reports of dwindling supplies of water and food, power outages, and downed communication networks. Hundreds of thousands of people spent the night sleeping in open areas, out of fear of more tremors. Heavy rain is now also reported which can further worsen the conditions.

Aid workers fear that the situation is perhaps worst still at the epicentre, believed to be near Lamjung, a district about 80 kilometers (50 miles) northwest of Kathmandu. Poor roads make access to Lamjung difficult, taking at least 6 hours to reach in normal circumstances. After the earthquake, access has been further compromised with landslides blocking off large parts of the road.

The UN has said that at least 940,000 children living in areas severely affected by the earthquake in Nepal are in urgent need of humanitarian assistance. The crisis leaves children particularly vulnerable - limited access to safe water and sanitation will put children at great risk from waterborne diseases, while some children may have become separated from their families, a statement by UNICEF reads.

Meanwhile, the United States committed an initial $1m and has made plans to send a disaster response team, says USAID. The UK committed £5m in aid and an eight-strong humanitarian team. Norway pledged $3.9m (£2.5m) in humanitarian assistance with additional pledges coming in from Germany, Spain, France, Israel, the EU, New Zealand, Canada and others.

How you can help:

Cheques can be made in favour of "UDAY FOUNDATION FOR CDRBG TRUST" and sent at following address:

Since Uday Foundation is not registered with FCRA we cannot accept foreign donations, it accepts donations from Non-Resident Indians only through any bank account operational in India. Contributions made by a citizen of India living in another country, from his personal savings, through the normal banking channels, is not treated as foreign contribution.

Please share the details after you have made the donation to help@udayfoundationindia.org, along with your complete address and PAN card no, enabling us to send a 80G tax exemption receipt of the same.

Other organisations that are raising donations for rescue and relief efforts in Nepal:

UNICEF
WFP
ICRC
Save The Children
Oxfam
Doctors Without Borders