The Mount Everest south base camp

NEW DELHI: The death toll following the devastating 7.8 magnitude earthquake that jolted Nepal has crossed 6000, with thousands of other still unaccounted for. Nepal’s home ministry has said that 6,134 fatalities have been confirmed, with 13,906 injured. Prime Minister Sushil Koirala had earlier noted that fatalities could cross 10,000.

Ram Sharan Mahat, the Nepalese finance minister, said it at least $2bn would be needed to rebuild the country. “This is just an initial estimate and it will take time to assess the extent of damage and calculate the cost of rebuilding,” Mahat said. Other numbers estimating the cost of reconstruction are even higher, with ancient monuments, artefacts and buildings having been destroyed.

The Red Cross has said that towns and villages near the epicentre have suffered “almost total devastation" with rescue teams working hard to reach the remote areas affected by the quake. Accessibility bottlenecks in the form of poor roads and bad weather have hampered efforts to reach isolated villages.

Meanwhile, radar images from Europe's Sentinel-1a satellite have revealed the aftermath of the Nepal earthquake. The images show that Mount Everest shrank by about one inch due to the land that was shaken in the natural disaster. Further, an area 75 miles (120km) by 30 miles (50km) has lifted up 3.2ft (1 metre) from the ground around the capital, Kathmandu.

"There's a peak of slip just to the northeast of Kathmandu. Basically, what we do is count the coloured 'fringes' in this interferogram and there are about 34, so that translates to more than a metre of uplift," explained Prof Tim Wright from the UK's Nerc Centre for the Observation and Modelling of Earthquakes, Volcanoes and Tectonics (COMET), to the BBC. 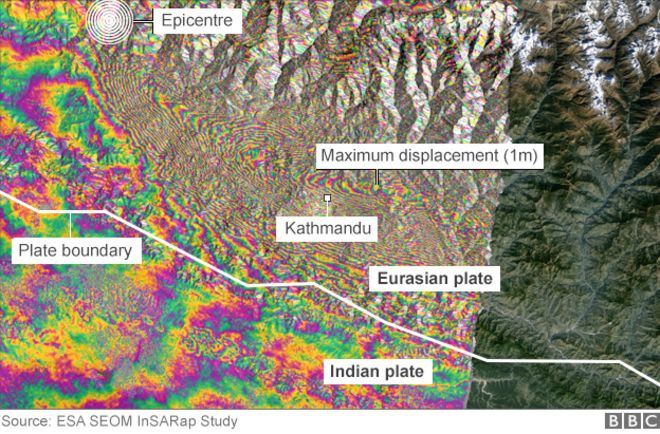 The earthquake also magnified fissures present in the country’s troubled polity, widening divisions between the government and an opposition led by Maoist former rebels. As aid -- curtailed by bottlenecks relating to accessibility concerns -- moves devastatingly slowly, people’s anger is rising. “No one has come to help us. There is not even a single house standing out of 71 houses in the village,” the Guardian quotes a villager in the remote district of Sindhupalchowk saying. The situation is as tense in Kathmandu, where quake survivors have clashed with riot police. "I keep hearing on the news that all governments and aid agencies are here, but where are they? Our government is totally absent. Forget shelter, they couldn't even give us water," said survivor Rajana to AFP.

As criticism regarding the government’s response mounts, the political crisis escalates with opponents questioning the competency and leadership of Nepal’s Prime Minister Sushil Koirala -- who was away at a summit in Indonesia when the earthquake struck.

Leading the charge is the opposition -- the Maoists. A spokesperson for the United Communist Party of Nepal Maoist (UCPN-Maoist), Dinanath Sharma, castigated the Prime Minister for “showing an insensitive attitude at this time of great national loss” (as quoted in WSJ).

The Prime Minister’s camp responded, with spokesperson Prakash Adhikari that the criticism was “unwarranted” and that Koirala was “doing all he can with available resources” (as quoted in WSJ).

The fact that Nepal is reliant on international aid to cope with the disaster, pouring in from neighbours India, China, the US, EU and other countries, has also become a bone of contention. UCPNM spokesperson Sharma, quoted in WSJ, says that this reliance on international aid instead of being able to take care of itself “is a matter of great shame.”

This political crisis, like the natural disaster in the form of an earthquake, did not come out of nowhere. The Maoists, who fought a decade long civil war against the government till 2006, decided to lay down their arms and join a political-reconciliation process. This process has been fraught with problems, as the Maoists who won a majority in the 2008 polls were roundly defeated in the 2013 polls.

Since then the leading Nepali Congress, the Communist Party of Nepal - Unified Marxist Leninist (CPN - UML) and the third biggest party, UCPNM have been bickering over a range of issues. Most recently, the Maoists and their allies called for a three day general strike, scheduled for this month but cancelled owing to the quake. The strike centred on a dispute with the government over the drafting of a new constitution, specifically on the contention regarding the country’s division into states along ethnic lines.

Similarly, the scale of the disaster following the earthquake is also not out of the blue. For decades, experts have been saying that Nepal is extremely prone to tremors, but the advice was not taken on and little was done to prepare the mountainous country to cope with an earthquake of this magnitude. The Nepalese “were not prepared for such a strong earthquake. They just simply had not had time to get all of the things they’d done operationalized,” said geologist Allen Clark, a senior fellow at the East-West Center in Hawaii to PBS.

In addition to being located on colliding tectonic plates, it is Nepal’s shoddy infrastructure and poor building standards that made the disaster imminent. “Physically and geologically what happened is exactly what we thought would happen,” said seismologist James Jackson, head of the earth sciences department at the Cambridge University (as quoted in The Daily Mail).

The disaster in Nepal, therefore, is the result of a shaky foundation: physically, economically, and politically. The need of the hour, however, is to ensure that gaps do not widen, and that country works to rebuild itself, collaboratively.