NEW DELHI: Narendra Modi began his first trip to China as India’s Prime Minister on Thursday. The three-day visit is of added importance as it is surrounded by cautious optimism, with spectators on both sides hoping that the once tense relationship is replaced by cooperation between the two Asian giants.

The two countries are signing 24 agreements worth about $10 billion. The Indian PM will also squeeze in some sightseeing and cultural enrichment, visiting historical sites in Xian where he met with Chinese Premier Xi Jinping on Thursday. 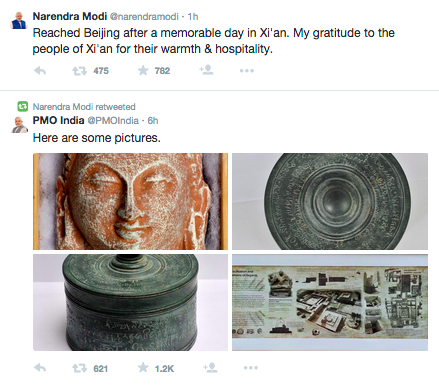 On Friday, PM Modi arrives in Beijing, where he will hold talks and sign agreements with Chinese Prime Minister Li Keqiang. In Beijing, the Indian Prime Minister will attend a Yoga-Tai Chi event at the Temple of Heaven and give an address at the Tsinghua University.

On Saturday, PM Modi is scheduled to travel to Shanghai for what has been described by India’s foreign office as a “business stop.” In Shanghai the Indian Prime Minister will sign some agreements and address a group of business leaders. “We expect business agreements to be signed,” India’s Foreign Secretary S. Jaishankar said on Tuesday at a news conference. PM Modi will then inaugurate a center for Gandhian studies at Fudan University and address a function for the local Indian community.

The visit, unsurprisingly, has commentators excited. The visit is seen as a shift in policy for both countries, with spectators hoping that the visit mitigates decades long tension.

Whilst optimism is never misplaced, it must be exercised with caution, especially as a range of issues still plague India-China relations. The first and foremost among these issues is the long-standing border dispute. In March this year, the two countries resumed contentious border talks -- the first such discussion since PM Modi came to power. The two countries share an ill-defined 4,057km (2,520 miles) border that has complicated relations. In fact, border tensions overshadowed a high profile visit of Chinese President Xi Jinping to India in September 2014, for talks with PM Modi. As hundreds of Chinese soldiers moved into Indian territory in Ladakh, bilateral relations between the two countries dipped and India raised “serious concerns” about the transgressions. “Clarification of the Line of Actual Control would greatly contribute to our efforts to maintain peace and tranquillity and I requested President Xi to resume the stalled process of clarifying the LAC,” PM Modi had said at the time.

More recently, a few months ago, China objected to PM Modi’s visit to Arunachal Pradesh, saying that it could add fuel" to the territorial dispute. Chinese Vice Foreign Minister Liu Zhenmin summoned Indian Ambassador Ashok Kantha to say that PM Modi's visit "infringes on China's territorial sovereignty and interests, magnifies the dispute on the border issue and violates the consensus on appropriately handling the border issue."

Arunachal Pradesh is a bone of contention between the two countries, with China maintaining that the border dispute is confined to the area, whereas India claims that China occupies 38,000 square km (14,600 sq miles) of its territory on the Aksai Chin plateau in the west.

The dispute led to the 1962 Sino-Indian War, and has characterised relations between the two countries ever since.

Additionally, PM Modi’s efforts at diplomacy with Japan, Vietnam -- both of which are locked in maritime disputes with China, and the US and some European countries, seems to have not gone down well with the Chinese. India, in turn, is understandably worried about China’s growing influence in South Asia -- which it concerns its own backyard. Most worrying for India, perhaps, is China’s ties with Pakistan. China has pledged millions of dollars in investment in Pakistan, and is working on its “One Belt, One Road” project to connect China to Central Asia and Europe.

The focus of cooperation seems to be economic, with geopolitical claims to regional power continuing, perhaps, to be a thorn in the side of the Sino-Indian relationship. An article in the Global Times notes that the relationship between the two countries has "constantly been overshadowed by negative issues, especially border disputes", which is a "strategic conflict" and has been "articulated primarily by Indian media” and goes on to assert that economic cooperation can trump such issues.