NEW DELHI: Horror stories have emerged as hundreds of Rohingya Muslims were left stranded in the seas, as boats carrying the minority community that was fleeing Myanmar were refused entry to countries in South and Southeast Asia.

Reports emerged of the efforts of the Thai, Indonesian and Malaysian navies in pushing the boats back, despite the pleas of the men, women and children on board. Indonesian fishermen, however, seem to have rescued over 1300 Bangladeshis and Rohingyas after they drifted or swam to shore in the provinces of Aceh and North Sumatra. The stories shared by these survivors sheds light on the looming humanitarian crises, and on the desperate plight of the Rohingya muslims -- one of the most persecuted minorities in the world.

Saydul Islam, 17, one of the rescued survivors, shared a story of a mother and her two children who were killed over food on the overcrowded boat. Mahmud Rafiq, a 21-year-old Rohingya man who left Myanmar a month ago, said people on board the boat agreed to leave the little food that was left to women and children (as quoted in stuff.co.nz). "They then started hitting us. They took the food," Rafiq said. "They pushed many of us overboard. They beat us and attacked us with knives," he said. "I was hit with a wooden plank on the head and on my legs."

Speaking to Al Jazeera, a passenger on a stranded boat, Abul Bakaa, related the desperation. "Yesterday one man jumped off the boat and drowned because he went crazy. At least 10 people have jumped ship. One died while some of the others made it to nearby fishing boats," Bakaa shouted from the crowded vessel. Another migrant told Al Jazeera she boarded the boat because she had nowhere else to go. "I don't have a home or anything left," she says. "The Rakhine killed my mother and my relatives. The people in the village said they were going to Malaysia, so I made the decision to follow them." 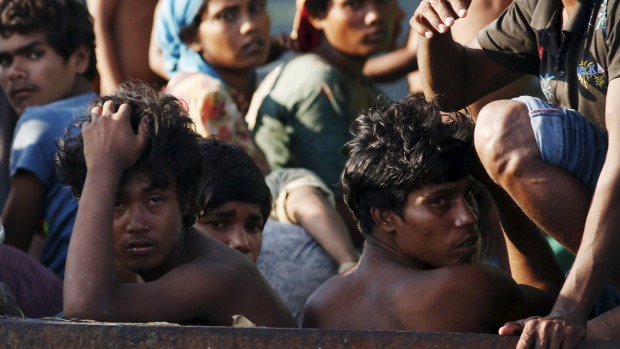 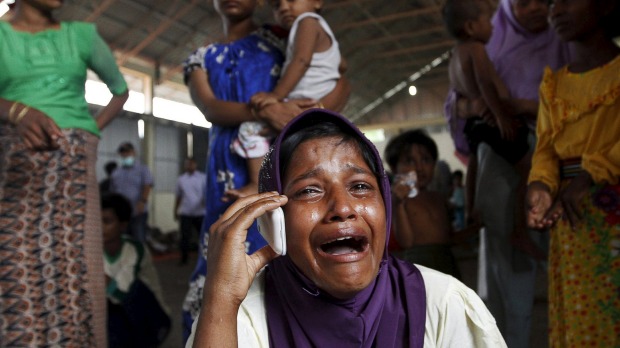 The UN Refugee Agency told the story of Fatima, aged 18 years, who barely survived the journey. She decided to leave a camp housing displaced people in Sittwe, the capital of Rakhine state in Myanmar, after her fisherman husband was killed under mysterious circumstances over a year ago and she could no longer fend for herself and her two young daughters.

Hoping to join her sister in Malaysia, she gave everything she had – 200,000 kyats (US$180) – to board a smuggler's boat some three months ago. The boat made stops to transfer and take on more passengers, resulting in severe overcrowding. They were given food twice a day, sometimes rice, porridge, dried fish or potatoes. More than a week ago, the crew left on a speedboat and abandoned them in the open seas.

"The boat was then controlled by some of the passengers who knew how to steer one. We sailed until we ran out of gasoline," recalled Fatimah, noting that some people swam to get help. On May 10, the boat carrying 584 men, women and children from Myanmar and Bangladesh was rescued by local fishermen in Indonesia's Aceh.

The immediate trigger for the crisis was Thailand’s decision to crackdown on human trafficking networks after the discovery of mass graves and smuggler camps in remote areas near the Thailand and Malaysian borders. This crackdown prompted traffickers to abandon asylum-seekers who had made the dangerous journey across the Bay of Bengal from Myanmar and Bangladesh.

The real roots of the crisis, however, are traced to the situation in Myanmar, where the Rohingya are denied any rights. In fact, his continuation of denying the Rohingya the right to a nationality makes direct violence against the Rohingyas far more possible and likely than it would be otherwise. The system’s context lies in the 1982 Citizenship Act, which supersedes all citizenship regimes in Myanmar. The Act created three classes of citizens - full, associate, and naturalised. Full citizenship is reserved for those whose ancestors settled in Myanmar before the year 1823 or who are members of one of Myanmar’s 135 recognized national ethnic groups - which, according to the recent census, continues to exclude the Rohingya. Associate citizenship applies to those who have been conferred citizenship under a previous 1948 law, which requires an awareness of the law and a level of proof that few Rohingyas possess. Naturalised citizenship is applicable to those who have resided in Myanmar on or before 1948, and here too, the Rohingya are denied citizenship as the government of Myanmar retains the discretion to deny citizenship even when criteria are adequately met.

It is under the legal system and the denial of recognition that the Rohingya continue to remain a stateless people. Myanmar, which as a member nation of the UN is obligated to promote “universal respect for, and observance of, human rights and fundamental freedoms for all without distinction,” fails to do so for the Rohingyas who are subjected to policies and practises that constitute violations of their fundamental rights and freedoms. They face restrictions on movement, forced labour, land confiscation, forced evictions, extortions and arbitrary taxations, restrictions on marriage, employment, healthcare and education.

There is an element of political opportunism in reference to the Rohingya in Myanmar. In 1990, Rohingya were permitted to form political parties and vote in multiparty elections. Myanmar even accepted about 250,000 repatriated Rohingya refugees from Bangladesh in 1992 and 1994 issuing Temporary Resident Cards to some. Rohingyas were permitted to vote in the 2008 constitutional referendum and 2010 elections. In fact, in the 2010 elections the voting rights were tied to the promise of citizenship if the Rohingya voted for the military regime’s representatives. However, Rohingyas are yet to be included as a part of any reconciliation programme involving ethnic groups, with Myanmar’s President Thein Sein, in the wake of the 2012 violence, stating that the Rohingya could not and would not be accepted as citizens or residents of Myanmar, going as far as to asking the UN High Commissioner for Refugees (UNHCR) to consider placing the Rohingya in camps outside of the country and resettling them to others. While it is true that Thein Sein and other Myanmar officials have had to moderate their position since due to external international pressure, Myanmar continues to violate UN convention by rendering the Rohingya stateless. A relevant convention is the Convention of the Reduction of Statelessness which obligates states to prevent, reduce, and avoid statelessness by granting “its nationality to a person born in its territory who would otherwise be stateless.” The Myanmar government is in clear violation of this convention, with hundreds of thousands of Rohingya having been displaced in the last 25 years.

It is this system that has perpetuated violence against the Rohingyas in Myanmar, with violent clashes between the country’s majority Buddhist population and the Rohingyas leading to deaths and displacement of the minority muslim community in 2012, 2009, 2001, 1978 and 1992, amongst other instances. In the most recent case of widespread violence in 2012, hundred of Rohingya villages and settlements were destroyed, tens of thousands of homes razed, and at least 115,000 Rohingyas displaced in camps in Myanmar, across the Bangladesh border, or further afield on boats.

The UN has termed the Rohingyas one of the most persecuted minorities in the world, a condition aggravated by the role of countries such as Bangladesh and Thailand that have turned back genuine refugees, with Thailand’s military being accused in 2009-10 of towing hundreds of Rohingya out to sea in poorly equipped boats and scant food and water after they tried to flee Myanmar. Although Thailand “categorically denies” the charge, the accusations have some merit as about 650 Rohingya were rescued off India and Indonesia, some saying that they had been beaten by Thai soldiers.

It is under these circumstance that rights groups have alleged that the Myanmar government is supporting a policy of “ethnic cleansing” of the Rohingya, with William Schabas, a member of the International Association of Genocide Scholars saying that “the Rohingya are the prima facie victims of the crime against humanity of persecution,” consisting of “the severe deprivation of fundamental rights on discriminatory grounds.”