A destroyed armored vehicle remains at the site of a blast targeting the NATO convoy in Kabul,

NEW DELHI: It has been a deadly 24 hours in Afghanistan, as a bombing targeted an international convoy in the capital city of Kabul, just hours after a suicide blast rocked a city in southern Helmand province.

The convoy carrying foreign forces along the airport road was targeted by a car bomb, Afghan Interior Ministry spokesman Sediq Sediqqi said. Several civilians seem to have died in the bombing, and others -- including servicemen -- injured.

The attack on the convoy triggered panic as it took place close to the US embassy. The images below paint a telling picture. 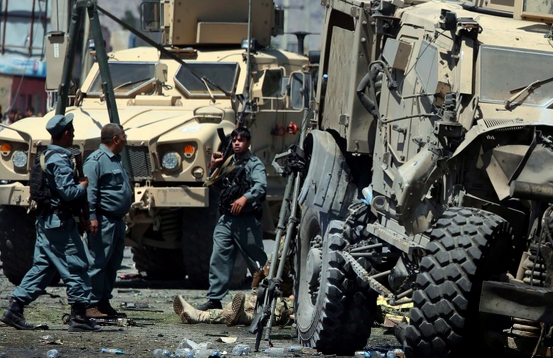 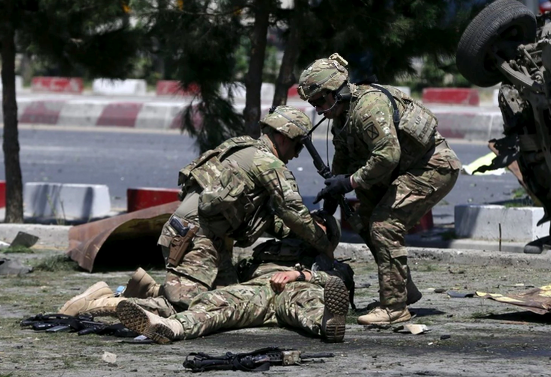 (US soldiers tend to a wounded colleague at the site of the blast. Image credit: Reuters).

Taliban spokesman Zabiullah Mujahid claimed responsibility for the suicide attack via Twitter as NATO's Resolute Support mission confirmed there had been an attack against coalition forces in Kabul, although adding that there had been no casualties.

The US Embassy in Kabul issued a statement in condemnation, saying, “The attack resulted tragically in civilian casualties and demonstrates the blatant disregard for human life by those seeking to disrupt Afghanistan's democratic progress.”

This, in fact, has been a deadly week even by Afghan standards, as Taliban gunmen launched a brazen attack on the Afghan parliament last Monday sending the country’s lawmakers running for cover and killing five people and injuring 31.

Ironically, the increase in violence coincides with the groundwork for potential peace talks between the Taliban and Afghan government. Earlier this month, Ministry of Foreign Affairs (MoFA) spokesman Ahmad Shekib Mustaghni confirmed that the government had sent a delegation to Norway to discuss the potential modalities of comprehensive peace negotiations with Taliban representatives.

As the prospect of talks loom just out of reach, the Taliban continues to step up violence. In fact, in its annual report released earlier in the year, the UN Mission in Afghanistan has said that the number of civilians killed or wounded in the troubled country climbed by 22 percent in 2014 to reach the highest level since 2009.

The UN says that Taliban militants -- who have been waging an insurgency in Afghanistan since a US-led invasion toppled their government 13 years ago -- were responsible for 72 per cent of all civilian casualties, with government forces and foreign troops responsible for 14 percent.

At one point, the peace talks looked set to fail as the Taliban vowed to push through with the “summer offensive” following the White House’s announcement that the United States will maintain its current 9800 troops in Afghanistan through the end of 2015, as opposed to an earlier plan of cutting the number to 5500. The Taliban reacted sharply to the statement with Taliban spokesman Zabihullah Mujahid saying, “This damages all the prospects for peace … This means the war will go on until they are defeated.”

Other factors also contributed to making the talks a difficult proposition. For one, the rift between the top two leaders of the militant group. The two in question are political leader Akhtar Mohammad Mansour, who favors negotiation, and battlefield commander Abdul Qayum Zakir, a former Guantanamo Bay detainee, who opposes any dialogue with the Afghan leadership. Sources state that the two met recently to address their personal differences, but no headway could be made on the issue of talks, with Zakir of the view that the Afghan government was illegitimate and that real power remained with the US any way.

The announcement of the change in plans of troop withdrawal tilted the position in favour of Zakir, with the Taliban command being clear from the start that the removal of foreign troops would be one of the prerequisites for the commencement of talks.

The talks, however, seemed to have pulled through, albeit only in the form of a start as of now. Months of informal and formal dialogue in Qatar, China, Norway and Dubai paved the way for this meeting in Oslo.

TOLO spoke to former Taliban commander Syed Akbar Agha about the talks. "If consultations and meetings between the government of Afghanistan and the Taliban are conducted on a regular basis, it would bear positive outcomes on the issues facing Afghanistan," Syed Akbar Agha said.

While the talks finally seeming possible is a major achievement, bottlenecks do remain. This is evinced by the fact that the Taliban recently rejected a call from the Afghan Religious Scholars' Council to put in place a ceasefire during the holy month of Ramadan.

Another factor that may play spoiler is Afghanistan’s relationship with Pakistan, the latter being crucial to the talks owing to its leverage over the Taliban leadership. The two countries recently signed an agreement between Afghan National Directorate of Security (NDS) and Pakistan’s Inter Services Intelligence (ISI).

Pakistan and Afghanistan have thus far shared a tense history, which the new Afghan President Ashraf Ghani has set to improve, partly because of Pakistan’s influence over the insurgents. This influence, however, has been the main source of ammunition for Ghani’s anti-Pakistan critics, who are accusing the Afghan leader of sleeping with the enemy so to speak.

When Ghani came to power in September last year, he quickly signalled a change in policy. Ghani soon after being sworn-in visited Pakistan, and then Pakistan’s army chief and head of intelligence visited Kabul. Afghanistan and Pakistan’s tense equation had sunk to an all-time low under the presidency of former Afghan President Hamid Karzai. Karzai had been openly critical of Pakistan -- accusing the neighbouring country of supporting the Afghan Taliban and providing refuge to the group’s leadership.

Ghani, unlike his predecessor, reached out to Pakistan. Delegations from the two countries made visits across the border; six Afghan army cadets were sent to Pakistan for training; military efforts were coordinated across the shared border; and Ghani and Pakistani Prime Minister Nawaz Sharif both issued statements in support of cooperation and bilateral ties.

The shift in policy seemed to be bearing fruit, with reports circulating that the Afghan Taliban -- under pressure from Pakistan was on the verge of agreeing to talks with the Afghan leadership. This was huge. For the first time in thirteen years -- since the US invasion of Afghanistan -- the Taliban, which has thus far maintained that the Afghan government is illegitimate, was ready to initiate a peace process.

Pakistan’s support was the crucial factor in enabling talks. A report in The Express Tribune quoted an unnamed former top commander of the group saying, “Taliban officials, who had been involved in talks with the Pakistanis and the Chinese, and had sought time for consultations with the senior leaders, have received a green signal from the leadership,” adding that “Pakistani officials had advised Taliban leaders to sit face-to-face with the Afghan government and put their demands to find out a political solution to the problem.” The same report quoted another unnamed Taliban source confirming the report and adding that “a small delegation will be visiting Pakistan in days for consultations” to be able to take the discussion with the Afghan government forward.

In fact, Ghani’s predicament -- of needing the US and wanting to begin a dialogue with the Taliban -- is reflected in a statement made by the Afghan President whilst in Washington. Ghani issued an apology -- of sorts -- to the Taliban. He said that peace with the militants was “essential” and that some Taliban members suffered legitimate grievances. "People were falsely imprisoned, people were tortured. They were tortured in private homes or private prisons," Ghani said (as reported by Reuters). “How do you tell these people that you are sorry?" he added.

And this is by no means an isolated view. An important figure within Afghanistan, Karzai echoes a distrust that runs deep with the Afghan people. Ghani, therefore, will inevitably -- sooner rather than later -- begin to face pressure in showing that his policy translates into results beneficial to Afghanistan.