The 'Rainbow' FB Profile Did Not Go Down Well In Pakistan...

NEW DELHI: A few days ago, after the US Supreme Court moved to legalize same-sex marriages across America, Facebook was flooded with rainbow-tinted profile pictures as a measure of solidarity. Facebook notes that some 26 million people used the app that transformed their otherwise ordinary image into overtones of vibgyor.

It did not matter whether you were an American or not, the weight of the judgement was felt the world over as messages of support poured in. This writer’s Facebook newsfeed, for instance, was flooded with such images -- despite a majority of users being in India.

Pakistan, too, saw the same scenario, with hundreds of users changing their profile picture using Facebook’s tool that turned an ordinary image into a message of gay pride. The conservative country, however, reacted to the worldwide trend a tad differently.

The Guardian spoke to IT worker Nabeel Khalid -- who was one such Pakistani who changes his profile picture. “The reaction was extremely negative with a lot of close friends, colleagues and ex-colleagues just completely unable to handle it,” said Khalid. “They could not accept that someone who is married is supporting something they say is away from our culture and our religion.”

Pakistan remains oblivious to LGBT rights, with such sexual orientations being taboo across the country. Like India, the country has a law criminalising same-sex relations -- rooted in a colonial British law of 1860. Under this act, all forms of intercourse other than penile-vaginal intercourse are criminalised.

Like India, where the law relates to Article 377 of the Indian Penal Code, the relevant law in Pakistan is Unnatural Offences" Article 377 of the Pakistan Penal Code. It states: “Whoever voluntarily has carnal intercourse against the order of nature with any man, woman or animal, shall be punished with imprisonment [...] for a term which shall not be less than two years nor more than ten years, and shall also be liable to fine"

And like India -- where there has been a resurgence of an intolerant moral police -- Pakistan has become increasingly intolerant over the years. The law has also been used in Pakistan. In 2003 three Pakistani men were arrested in the city of Lahore when one of their relatives turned them in for engaging in same-sex sexual acts at a private party. Their punishment is not known. In 2005, a man named Liaquat Ali, 42, from Khyber region bordering Afghanistan married a fellow tribesman Markeen, 16, with the usual pomp and show associated with tribal weddings. Upon hearing of the man's religious infidelity, a tribal council told the pair to leave the area or face death.

Whilst all this may sounds extremely depressing, here is a photo from the Pride Parade in New York that should lift the spirits of any advocate for LGBT rights (and any proponent of cross-border peace). 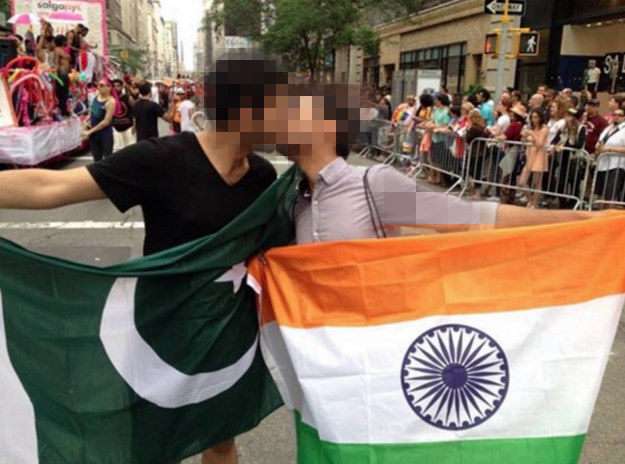