NEW DELHI: Tributes poured in on Sunday for Hamid Gul, the former Inter-Services Intelligence (ISI) chief who is widely seen as as key enabler of militancy in Afghanistan and in Jammu and Kashmir. Pakistan’s neighbours -- understandably therefore -- did not share the same sentiment, with social and political commentators in India and Afghanistan sharing their less favourable take on the ex ISI chief.

“PM Nawaz Sharif has expressed his heartfelt condolences over the sad demise of Lt.Gen.(retd.) Hamid Gul,” the PML(N) Tweeted. “Eternal peace for the departed soul and said that may God bless the deceased with countless blessings in the Hereafter,” it added.

Legislator Arif Alvi called Gul a “great man” and PTI leader Imran Khan referred to him as a “patriot.”

Former President of the PTI, Ejaz Chaudhary, tweeted another tribute.

Across the border in Afghanistan, the sentiment differed entirely. Former deputy foreign minister, Ershad Ahmadi, tweeted: “And finally the real Mullah Omar has died” -- a tweet that refers to the recent death of the Taliban leader, Omar, and implicates Gul for his role in creating the Taliban.

Spokesperson of the Afghan Ministry of Interior Affairs, Sediq Sediqqi, tweeted: Gen Hamid Gul former ISI Chief and the father of Taliban is dead, he created Taliban and was behind terror created by Taliban till last day.”

Journalist Talat Aslam tweeted: “Glad to see Hamid Gul being called out for what he was: an enemy of democracy, godfather of killers, destroyer of our country, Afghanistan.”

“It would be quite accurate to say that the violent, self-destructive legacy he leaves behind includes Gulbuddin Hekmatyar, the Taliban (including Pakistani Taliban) and anti-India Lashkars as his most dangerous offspring. You can also say quite safely that while created to fight for Islam, these groups have killed at least a hundred fellow Muslims for one of the others (Hindu, Christian, Jew) that they have killed.

Forces Gul unleashed harmed the entire world, though his neighbours, Afghanistan and India, enormously more than the rest. He never regretted what he did. And although I was never invited into his home, those who were recount how he showed off a sizeable piece of the Berlin Wall that his German fans had presented him. Why? Because he led the jehad that ultimately destroyed the Soviet Empire.” 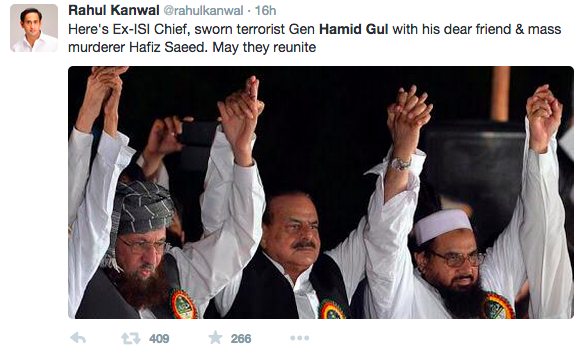 The Citizen’s editor in chief, Seema Mustafa, posted a status not just on Gul but on espionage in general, and asked: “But if spies were honest (an oxymoron!) perhaps those on opposing sides could follow John Le Carre's suggestion in his book Tinker, Tailor, Soldier, Spy,look at each other and say, “Look, we are getting to be old men, and we've spent our lives looking for the weaknesses in one another's systems... Don't you think it's time to recognise that there is as little worth on your side as there is on mine?” 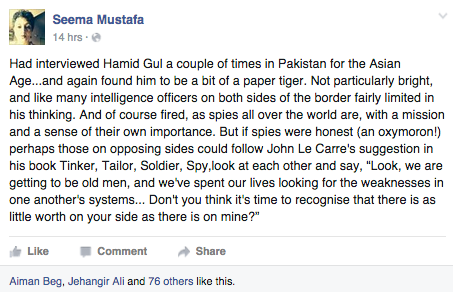