NEW DELHI: New research has discovered that a deadly ‘kink’ in the fault line beneath Nepal that appeared after last year’s devastating earthquake is causing the Himalayas to grow, bringing with it the threat of further destruction.

Experts have warned that the kink causes a build up in pressure, which could unleash another devastating earthquake beneath Nepal's capital Kathmandu within the next few decades. The kink in the fault line has created a ramp 12 miles below the surface that causes material to constantly pile up on it to raise the height of the mountains.

This build up directly relates to earthquakes, that cause a reversal of the buildup as the mountains shrink a tiny amount and the pressure in the crust is suddenly released. Normally it takes centuries for the pressure to build up in the fault, but in the case of Nepal -- as some of the fault unruptured, it may only take decades before another earthquake hits the region.

The findings were reported by a team of Geologists led by John Elliott from Oxford University and published in the journal Nature Geoscience.

The team examined images from Europe's Sentinel-1a radar satellite and other spacecraft to map the forces of the earthquake.

The abstract to the report reads: The Himalayan mountain range has been the locus of some of the largest continental earthquakes, including the 2015 magnitude 7.8 Gorkha earthquake. Competing hypotheses suggest that Himalayan topography is sustained and plateconvergence is accommodated either predominantly on the main plate boundary fault, or more broadly across multiple smallerthrust faults. Here we use geodetic measurements of surface displacement to show that the Gorkha earthquake ruptured the Main Himalayan Thrust fault. The earthquake generated about 1 m of uplift in the Kathmandu Basin, yet caused the high Himalaya farther north to subside by about 0.6 m. We use the geodetic data, combined with geologic, geomorphological andgeophysical analyses, to constrain the geometry of the Main Himalayan Thrust in the Kathmandu area. Structural analyses together with interseismic and coseismic displacements are best explained by a steep, shallow thrust fault flattening at depth between 5 and 15 km and connecting to a mid-crustal, steeper thrust. We suggest that present-day convergence across the Himalaya is mostly accommodated by this fault—no significant motion on smaller thrust faults is required. Furthermore, given that the Gorkha earthquake caused the high Himalayan mountains to subside and that our fault geometry explains measured interseismic displacements, we propose that growth of Himalayan topography may largely occur during the ongoing post-seismic phase.” 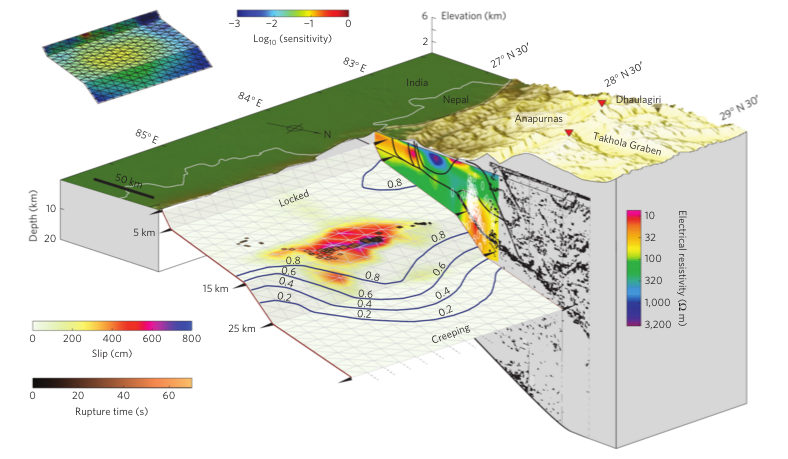 (Three-dimensional block diagram of the geometry proposed for the MHT. Colours denote earthquake slip relative to interseismic coupling(blue lines) inferred from GPS-, levelling- and InSAR-derived deformation rates before the Gorkha earthquake. High-frequency seismic sources during the earthquake rupture (diamonds), run along the ramp-and-flat hinge line at 14–15 km depth. The cross-section shows the In Depth reflection profile, the main faults (black lines) and an electromagneto-telluric image highlighting the high conductivity (low resistivity) measured along the MHT. White ellipses are relocated micro-seismic activity before the Gorkha earthquake. Note the gap between the fault plane and cross-section for clarity. Inset: Model sensitivity s (defined as diag(G0G) where G is the Green’s function matrix) indicates the normalized sum of surface displacements caused by unit slip on each point on the fault. Credit: Nature).

The researchers trace the activity to a locality some 10-15km below the earth’s surface, spread across what they term a “hinge point” where the main fault in the region transitions from being relatively horizontal to being sharply angled into the Earth.

The consequences of this geometry are several. Firstly, it explains why and how the surface surrounding Kathmandu rose up by about a metre during the quake, and dropped by roughly 60cm in the more mountainous terrain to the north.

It also provides a model for how the Himalayas gain height over the years. The high Himalayas currently gain on average about 4mm per annum, as a cycle of quakes slumping and mountain building characterise the Himalayan landscape.

Last April's earthquake occurred in what scientists refer to as a seismic gap, i.e a segment of the fault that has not experienced any significant strain-releasing activity in some time. A study of the gap shows that there is potential for more quakes, as only the far eastern sector of this gap caused the 2015 tremors. Possibilities therefore exist on the western and southern parts of the gap.

The latest analysis demonstrates that the main fault did not rupture all the way to the surface on 25 April. It stopped abruptly some 11km under Kathmandu. "There is still half of the fault - that's going south of Kathmandu, from a depth of 11km up to the surface - that hasn't yet broken," Dr Elliott told BBC News. "Our hypothesis is that the abrupt stop is because the main fault has been damaged and it was held up where it intersected with other, smaller faults. But this will only be temporary. "These earthquakes tend to happen on the century timescale, but this barrier could be pushed through on a shorter timescale. Of course, our problem is that we are not able to predict when; we can never give a date."