NEW DELHI: Pakistan is bracing for further protests ahead of former bodyguard, Mumtaz Qadri, who was hung on Monday as Pakistan’s Supreme Court awarded the Qadri the death penalty in connection with the murder of Punjab Governor Salman Taseer in 2011.

Qadri, who had shot Taseer owing to the latter’s criticism of the country’s controversial blasphemy law, was hailed by some Islamist groups as a hero. He shot Taseer 27 times in the back, confessing to the authorities immediately and proudly, and admitting that he had killed Taseer because of the governor’s stance on blasphemy.

His execution on Monday prompted thousands of protesters to take to the streets across Pakistan. 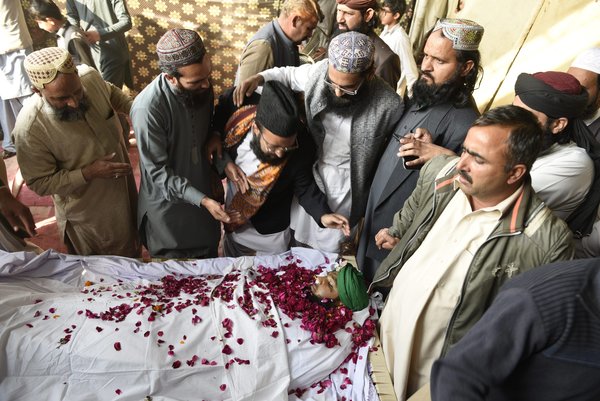 (The body of Mr. Qadri, who was hanged at 4:30 a.m. on Monday at the Adiala Jail, a high-security prison in Rawalpindi, Pakistan. Credit T. Mughal/European Pressphoto Agency/ The New York Times).

AFP reported that cries were heard from inside Qadri’s house, as hundreds of people gathers. Mosques could be heard broadcasting news of the execution.

“I have no regrets,” Qadri's brother Malik Abid told AFP. Malik Abid told the agency that the family had been called to the prison Sunday evening by officials who said Qadri was unwell. When they arrived, Qadri informed them that his execution was imminent. “We started crying, but he hugged us,” Abid said.

Protests gripped the country as Qadri was hailed as a hero. Criticism of the blasphemy law is a controversial subject, evinced by the fact that just two weeks after Taseer was killed, the only Christian minister in the federal cabinet, Shahbaz Bhatti -- also a critic of the blasphemy law, was gunned down in Islamabad. In August 2011, Taseer's son was kidnapped from his car in Lahore. Shahbaz Taseer’s wherabouts remain unknown.

Qadri’s court proceeding were marked with supporters throwing rose petals. He maintained a sort of privileged status in prison, where he lived comfortably with visits to his cell taking the form of a religious pilgrimage for some. A mosque was built and dedicated to him.

While in prison in 2014, Qadri even managed to persuade a security guard to shoot another prisoner who was accused of blasphemy. The man was wounded but survived.

Prison officials said Qadri was executed at 04:30 local time (23:30 GMT) at Adiala jail in Rawalpindi, near the capital, Islamabad. After news of his execution, crowds took to the streets in protest.

Supporters gathered outside his home in Rawalpindi. By early Monday afternoon, the expressway connecting Islamabad and Rawalpindi was blocked by protests. As the neighbourhood filled with chants of “long live the martyr Mumtaz Qadri,” religious parties announced that the funeral will be held on Tuesday.

Islamabad, the capital, was on lockdown.

The execution came after the Supreme Court, in a judgement issued relating to the case, said that debate and calls for improvement on the controversial blasphemy law should not be considered objectionable. Last week, a request for mercy he had made to President Mamnoon Hussain was rejected.