What Pakistan's Pro- Qadri Protests Reveal About Its Society

NEW DELHI: Hardline Islamist protesters have finally ended a four-day demonstration in Islamabad, after assurances that the Pakistani government had no plans to abolish or amend the country’s controversial blasphemy law.

The protests gained steam after the execution of Mumtaz Qadri, who was executed earlier in the month after the top court awarded the death penalty in connection with the murder of Punjab Governor Salman Taseer in 2011.

Qadri, who had shot Taseer owing to the latter’s criticism of the country’s controversial blasphemy law, was hailed by some Islamist groups as a hero. Taseer had been openly critical of the blasphemy law, vocally supporting Asia Bibi -- a Christian lady convicted of insulting the Prophet on the flimsiest of evidence. Qadri shot Taseer 27 times in the back, confessing to the authorities immediately and proudly, and admitting that he had killed Taseer because of the governor’s stance on blasphemy.

As the protesters gathered in Islamabad this week, they not only hailed Qadri as a hero, but also demanded the immediate execution of Asia Bibi and guarantees that the blasphemy law not be altered in any way.

The protests reveal the paradox that is fundamental to Pakistani society and polity. This is demonstrated by the fact that the protests ran parallel to a brutal terror attack in Lahore -- where over 65 people were killed and hundreds injured.

The Tehreek-i-Taliban Pakistan- linked Jamaat-ul-Ahrar claimed responsibility for the suicide blast, with the faction’s spokesperson Ehsanullah Ehsan saying that “the target were Christians” -- as the blast targeted families celebrating Easter Sunday at Gulshan Iqbal Park. 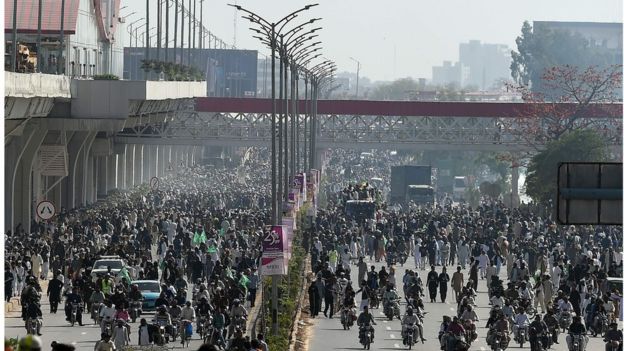 (Some estimates said there were more than 10,000 people at the rally on Sunday. Credit BBC News)

As Pakistan reeled from the horrors of the blast, the protests were not against the ideology and groups that carried out the blast, but against measures that may prevent the persecution of minorities in the country.

As Rana Amaar Farooq wrote in The Citizen, the protests (and now especially given the context of the recent terror attack), is indicative of the fact that the “agents of extremism have won in Pakistan.”

Farooq wrote in reference to Qadri -- “His confession was not followed by years of introspection, regret or apologies. This was not just because he was deranged and incapable of coming to terms with the horror he had committed. He was celebrated, not banished, by crowds of Pakistanis as a hero who defended the honour of faith against blasphemy. He was told time and again by hordes of lawyers that his interpretation of vigilante justice was the correct one. He was assured by religious zealots that the inconvenience of trial and punishment was only temporary and to be followed by his pompous welcome into paradise.”

“Qadri never had a chance. Not when he was denied the education to teach him what it entails to live in a society based on the rule of law as a responsible citizen. He did not have a chance when the vanguard of religious scholars, jurists and citizens stood back as the clerics at his local mosque told him every Friday that the Islamic nature of the state was threatened by secular politicians who wished to create a debate about defending the rights of minorities. No one rose to explain to him the constitutional safeguards for both Islamic injunctions and minority rights.” 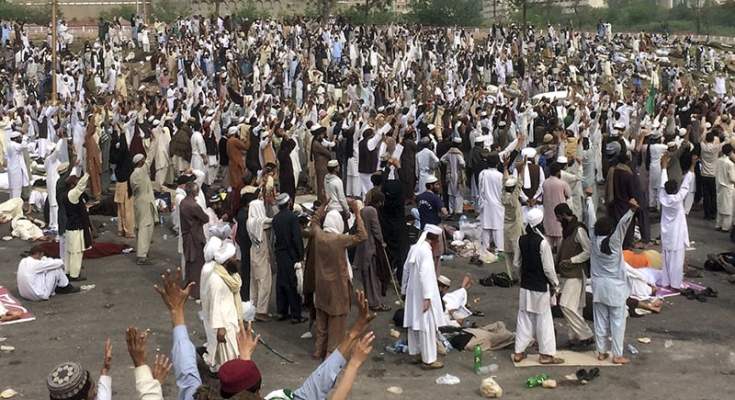 “Neither did he have a chance when society stood by and saw that innocent Christians were implicated in accusations of blasphemy year after year as an easy alternative to eviction from their lands.”

The last week in Pakistan -- with the terror attack and the pro-Qadri protests -- are proof that the agents of extremism, and the doctrine of hatred, is winning (if it has not already won).