Threats And Intimidation Force 'Little Messi' To Flee To Pakistan

NEW DELHI: A young Afghan boy and his family who found themselves in world headlines after a photo of the boy wearing a homemade Messi shirt went viral say that threats and intimidation forced them to flee to Pakistan.

Five-year-old Murtaza Ahmadi became a worldwide sensation in January when he was identified as the boy in viral photo. The photograph was of Ahmadi -- a big fan of footballer Lionel Messi -- wearing a Messi jersey made of a striped plastic bag.

The boy was soon identified, and within a short span of time, the feel good story took a dark turn. "Life became a misery for us," Mohammad Arif Ahmadi, the boy’s father, told The Associated Press over the telephone from the Pakistani city of Quetta.

Ahmadi told the AP that the family received telephone threats he said were from the Taliban and a menacing letter he believed was also from the militant group. AP reports, “Ahmadi said that at first he was not sure who was behind all the phone calls, and that he thought it might be criminal gangs seeking to extort money and falsely thinking the family might have made lots of cash amid the boy's international popularity. But he said he realized it was the Taliban after he received a call from a local driver in the area who told him he was bringing him a letter."

The threats became so intense that Ahmadi and his family were forced to leave the country. "I sold all my belongings and brought my family out of Afghanistan to save my son's life as well as the lives of the rest of the family," he said.

The sad turn of events is all the more unfortunate given that the original photograph’s popularity helped draw attention to the plight of people living in conflict-torn states. At the time of its virality, UNICEF took the opportunity to comment on the importance of helping children "trapped in emergencies." The aid group said: "Like so many other children, he has the same right to thrive, play, and practice sports." 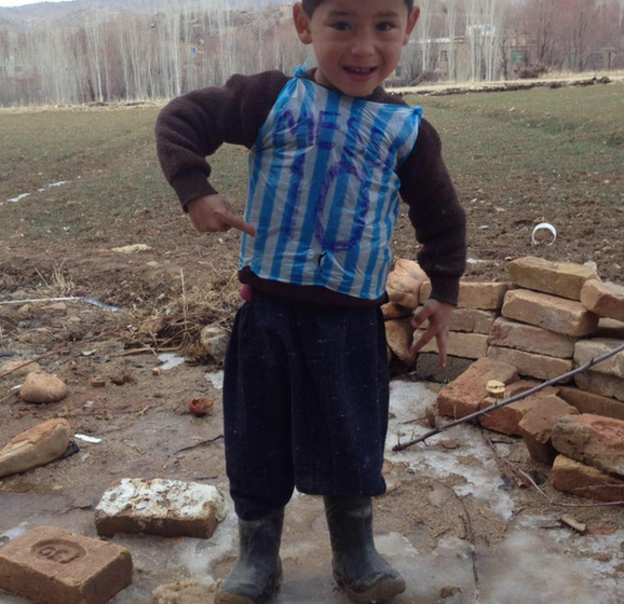 Murtaza was only identified as the boy in the photo after an online quest traced the photo to rural Afghanistan. Lionel Messi himself supported the search for the young boy. Initial claims suggested that the boy was an Iraqi Kurd, but Murtaza was identified after his uncle zim Ahmadi, an Afghan living in Australia posted his pictures. BBC News then contacted Azim’s brother Arif, Murtaza's father, who answered his Afghan mobile and confirmed his son was indeed the boy that the web has been searching for.

According to BBC News, Arif said the original photo of Murtaza wearing the plastic shirt was taken by his oldest son Hamayon who published them on his Facebook page. The family live in the Jaghori District, in the eastern Ghazni province of Afghanistan. 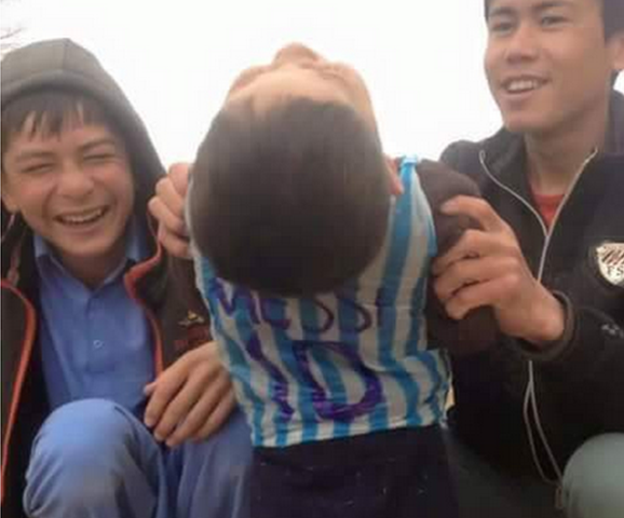 Arif said: "This little kid really loves Messi and football. It is not possible for us to buy [a jersey] for him. Because I am a simple farmer. So the kids decided to use the plastic." The father says Murtaza knows that he is famous now and "he is extremely happy". "He heard from friends who have internet. They called and told us about it". My younger son is also hoping that foreign countries help us meet Messi and if we could be good football players like him in the future."

In tragic irony, Murtaza’s love for football -- and the attention that received -- forced him to leave his home country.