NEW DELHI: A new report states that Pakistan, despite having seen increase in the 2015-16 education budget, has the lowest figures when it comes to education spending in South Asia. ‘The Public Financing of Education in Pakistan (2010-11 to 2015-16)’ was released by the Institute of Social and Policy Sciences (I-SAPS).

The report, which follows six previous reports, analyses the federal, provincial and district tier budgets not only as aggregated allocations and expenditures from 2010-11 to 2015-16 but also examines the budget at functional (primary, secondary and higher education) and operational (salary and non-salary budgets) levels.

As such, it notes that the share of education in total provincial budgets is declining except for Balochistan.

Excerpts from the report: 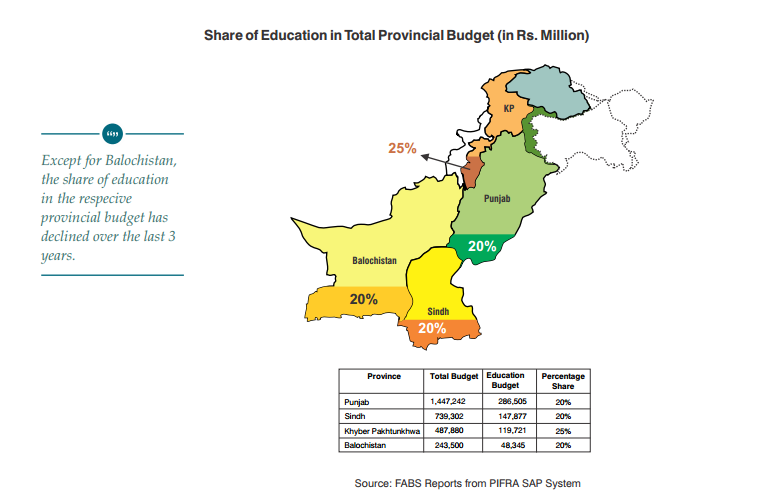 All the provinces have increased their education budgets this year compared with the allocated budget in 2014-15. The highest increase of 19 percent in allocations has been reported for Balochistan followed by 12 percent for Khyber Pakhtunkhwa, 10 percent for Punjab and 7 percent increase for Sindh.

The development budgets for education in case of Khyber Pakhtunkhwa and Balochistan have been slashed by 15 percent in 2015-16 compared with previous year's allocated budgets. In 2014-15, the governments of Khyber Pakhtunkhwa and Balochistan had allocated Rs. 26.1 billion and Rs. 11.7 billion respectively for development purposes, however, these have been reduced to Rs. 22.2 billion and Rs. 10.02 billion respectively in 2015-16 presenting a decline of 15 percent in both cases. 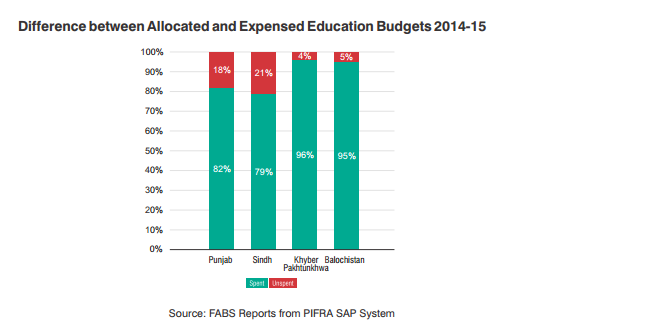