BAGERHAT, Bangladesh (IPS): Frozen tiger shrimp exports from Bangladesh, mainly to the United States and the European Union, have grown substantially over the years and the demand keeps increasing.

The industry is now getting an extra boost from the introduction of better technology that uses pathogen-free shrimp larvae or fry and the use of improved shrimp farming practices.

Introduction of the modern technology is predicted to further boost frozen shrimp exports from Bangladesh, lifting current export earnings from 600 million to 1.5 billion dollars, and putting the shrimp industry at third place in terms of foreign exchange earnings. Currently, Bangladesh is ranked fifth in the world for farmed tiger shrimp production.

With technical support from WorldFish, a nonprofit research group that works to reduce poverty in the developing world, many farmers have already learned how to produce quality shrimp in abundant quantities on the same piece of land – although environmentalists have repeatedly warned of adverse consequences from the use of agricultural land for the saltwater shrimp farming.

Unlike integrated shrimp farming, where small freshwater prawns are grown with other fish and vegetables, ESF replaces indigenous practices with more modern methods that promise greater yields per hectare of land. Currently, around 20,000 shrimp farmers in the region practice the new technology on about 30,000 hectares of land covering some 25,000 registered low depth enclosures with raised embankments popularly known as ghers.

Situated in a specific geographic locality stretching hundreds of kilometers, these ghers depend on the same seawater source channeled from the Bay of Bengal and captured during storm surge seasons. Sujit Mondol, 28, is one of the farmers in Khulna’s coastal area of Borodanga village who was selected in 2012, among many, for a one-year training on ESF under a WorldFish project called Aquaculture for Income and Nutrition, or AIN. He told IPS how he and others benefited from the training programme held in the village he lives in.

“It was in my gher where WorldFish had set up demonstration for learning for a group of farmers. We received hands-on training of different stages of the technique from nursing post larvae to growing the adult tiger shrimps which grow on average six to eight inches, each weighing 35 to 40 grammes,” Mondol said confidently.

“The specialty in MTT method is the use of deeper enclosures that are dug about four feet deep and are maintained very clean. Traditional farming is done in lowlands and canals. But the new technology requires carefully laid-out embankments in a controlled environment so that the temperature, which of course is a major factor in shrimp cultivation, can be controlled to avoid shrimp being exposed to heat and diseases.” 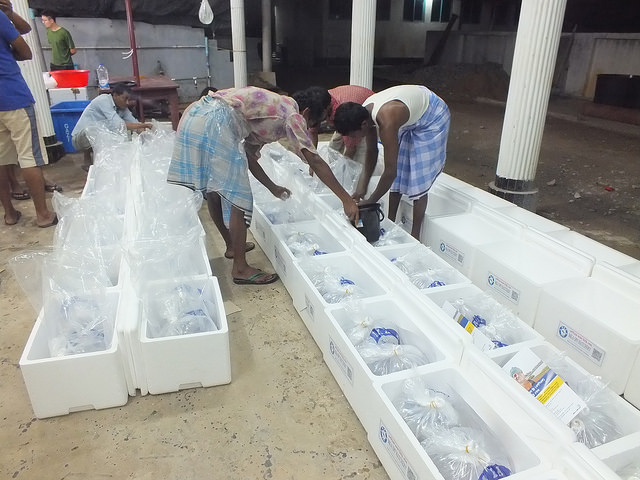 As the name itself suggests, MTT (or ESF) uses some modifications like the use of nurseries, deeper water bodies and cleaner environments. Traditional shrimp farming practices place larvae directly in the ghers instead of in nurseries. But the nursery phase has some added advantages – the survival rate of the larvae increases and so does productivity.

A farmer in Panirhat in Bagerhat said, “We have already noticed the increase in production of the shrimps. MTT method of shrimp farming gives at least 25-35 percent more shrimps than the traditional ghers practices. The news of increased production spread like a wildfire. Hundreds of local farmers visited my gher and expressed interest in adopting the improved technology.”

Sujit earned 5,600 dollars last year from cultivating shrimp on his gher on about 350 decimals of land in just one season. The following year, Mondol, not surprisingly, made more money – 7,500 dollars from ghers on about 200 decimals of land. During the same period in previous years, Sujit earned less than half of the amount he disclosed.

Quazi A Z M Kudrat-E-Kabir, AIN’s project manager, told IPS, “Our efforts are intended to facilitate capacity building of the shrimp farmers. Initially we had tough time pursuing farmers about their doubts over encouraging harvest. Our challenge was to clear the clouds. In less than two years farmers are now showing tremendous enthusiasm as uncertainties disappeared in practical life.”

Like Mondol, Moslem Ali Sheikh, a veteran shrimp farmer in Bishnupur village in Panirhat in neighbouring Bagerhat district, also made fortune from using the modified technology.

“At the beginning, I had doubts on additional yield,” Sheikh said. “They say that they got double yield in the deeper enclosure ghers than the traditional ghers that uses low depth (about two feet). The result was more obvious when I applied the technique.”

In just the last few months, more than 6,000 shrimp farmers in Bagerhat, Khulna and Satkhira have adopted the new technology, and the demand keeps increasing.

With the help of USAID (the United States Agency for International Development), in 2014 WorldFish introduced pathogen-free post larvae or shrimp fries called specific pathogen free (SPF) which gives farmers extra security against loss from diseases, in particular the most common, the White Spot Syndrome Virus (WSSV), which poses a serious threat to the industry.

“It is indeed splendid to have such innovative technology that really benefits us,” said Munir Hussain, a shrimp farmer in Jewdhara village in Morolganj of Bagerhat district who introduced SFP larvae in the same gher where ESF is introduced.

Before introduction of the globally recognized SPF, farmers suffered heavy losses from infected shrimp. Hundreds ofghers would suffer as the virus spread among them.

“It is important that all farmers in a community stock SPF shrimp,” Hendrik Jan Keus, Chief of Party, AIN Project in Bangladesh, told IPS. “If some farmers stock diseased shrimp seed, they may infect other ghers also.”

Nihar Ranjan Halder, a local service provider from WorldFish, told IPS, “The most common infection is WSSV and we had no remedy. However, since SPF was introduced, farmers no longer complain of any diseases. Introduction of SPF larvae would give thousands of farmers economic security.”

The biggest advantage of using SPF shrimp larvae is that they grow 20-25 percent faster than the conventional ones and above all, the SPF larvae are free from the 10 known deadly virus that are said to attack and destroy adult shrimp.

M K A Hatchery, a state-of-the-art shrimp hatchery in the southeastern Cox’s Bazar district, is the plant where pathogen-free larvae are produced. The hatchery, in operation since 2014, is the only one in the country. One to two million SPF post larvae are produced daily to feed the ghers in southwestern region.

Taslim Mahmood, chief consultant of M K A Hatchery, told IPS, “After months of trial and error we are now commercially producing and meeting the supply of SPF post larvae in the country. We have a capacity of producing well over 500 million such larvae every year.”

The blend of the two (SFP and ESF) technologies is expected to generate huge economic benefits as more farmers take an interest.

A total of 140,261 metric tons (MT) of farmed shrimp was produced in 2012- 2013, which was 137,175 MT in the previous year. The total value of the shrimp was 4.6 billion and 4.2 billion dollars, respectively. The shrimp industry benefits three to four million, mostly poor Bangladeshis while providing livelihoods directly to some 1.1 million people.