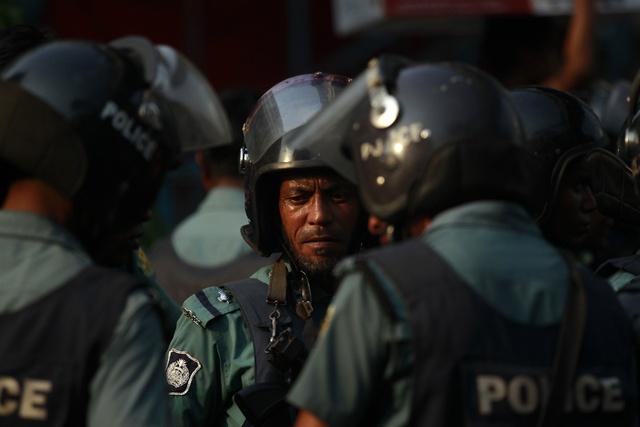 (Police stand guard during a rally by activists demanding capital punishment for a group of bloggers in Dhaka, Bangladesh on April 12, 2013.© 2013 Reuters)

Between June 10 and 16, 2016, security forces have reportedly arrested over 11,000 in connection with a spate of murders of bloggers with secular or atheist leanings, non-Muslims, members of the LGBT community, and other progressive or liberal thinkers. Those detained should either be charged on the basis of credible evidence of criminal activities and brought immediately before a judge, or be immediately released.

“After a slow and complacent response to these horrific attacks, Bangladesh’s security forces are falling back on old habits and rounding up the ‘usual suspects’ instead of doing the hard work of carrying out proper investigations,” said Brad Adams, Asia director. “The government has an obligation to put an end to these murders and hold the perpetrators to account, but it must do so through proper procedures set out in its own criminal code as well as in international law.”

The wave of targeted killings of bloggers, secularists, and religious minorities began in 2013 and has escalated in recent months. To date, more than 50 have been killed, often through machete attacks in public spaces. Many of these killings have subsequently been claimed by Daesh (ISIS) or Ansar al-Islam, a Bangladeshi militant group linked to Al-Qaeda, but their involvement has not been established. The government denies the presence of both groups in the country.

The authorities were initially slow to respond to these murders, making only a handful of arrests in a few cases. In several of these cases, Human Rights Watch found that police detained those arrested weeks before they formally accused them of murder, failing to inform their families of their locations or provide access to legal counsel.

However, following the high profile murders of two gay rights activists on April 25, 2016, and the wife of a senior police officer responsible for counterterrorism operations on June 5, the government announced a new crackdown on extremists to bring an end to these killings, and the mass arrests began.

The killings of bloggers and others who allegedly do not conform to Islamist principles began in 2013 and, following a brief respite in 2014, resumed in 2015, continuing unabated until today. The initial “machete attacks” were largely against bloggers writing publicly about secularist or atheist principles, but later expanded to target members of religious minority groups, professors and students, publishers, and most recently LGBT rights activists.

The government’s initial reaction involved both condemning the killings but also urging those targeted to censor their writing or curtail their activities. In 2013, the authorities prosecuted four bloggers for “offending religious sentiments.” In 2015, following the murder of prominent blogger Niladri Chatterjee Niloy, Bangladesh’s Inspector General of Police warned bloggers that “hurting religious sentiments is a crime,” rather than protecting the right of free expression.

Anecdotal accounts of the recent roundups suggest that they are similar to those of the past. Police summarily stop people fitting a particular profile: largely young men in areas the police suspect harbor militants. Police sources themselves state that of the more than 11,000 rounded up on this drive, only about 145 are confirmed members of militant organizations. Membership of an organization is not sufficient evidence to link individuals to these crimes.

Media reports claim that some of those detained are being made to pay bribes to secure their release, a familiar pattern in Bangladesh. For instance, in one case reported to Human Rights Watch in the present roundup, police detained a youth, beat him up in custody, and then demanded a 100,000 taka (US$1,270) bribe, threatening otherwise to list him as a suspected fundamentalist. 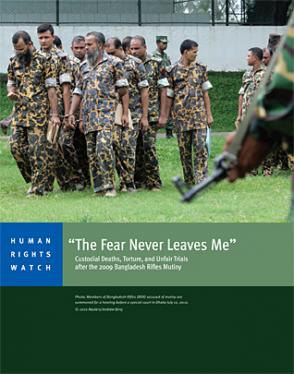 Human Rights Watch noted that the government of Prime Minister Sheikh Hasina has promised a climate of zero tolerance for torture and impunity.

“The mass arrest of thousands upon thousands within the course of a few days is a familiar scene in Bangladesh, but does little to inspire confidence either that these ghastly killings will stop or that due process will be followed,” Adams said. “The authorities need to conduct focused investigations in order to find those responsible for planning and carrying out the wave of killings that has so outraged the world.”