NEW DELHI: More than 300 people have been killed, including many civilians, in renewed fighting in South Sudan’s capital Juba. The escalation in violence has raised fears that the country is returning to civil war.

The new clashes originally broke out on Thursday and Friday between troops loyal to Salva Kiir, the president, and soldiers who support the vice-president, Riek Machar. Saturday -- which is when South Sudan celebrated five years of its independence from Sudan -- saw a lull in fighting, which resumed again on Sunday with many civilians being caught in the cross fires.

The United Nations Security Council issued a statement calling on warring factions in South Sudan to immediately end the recent fighting and prevent the spread of violence. In a unanimous statement, the council condemned the fighting "in the strongest terms" and expressed "particular shock and outrage" at attacks on UN sites.

The Indian embassy in South Sudan issued an advisory on Monday appealing to Indian citizens stranded in the violence torn country to remain calm. Minister of External Affairs Sushma Swaraj retweeted the advisory. 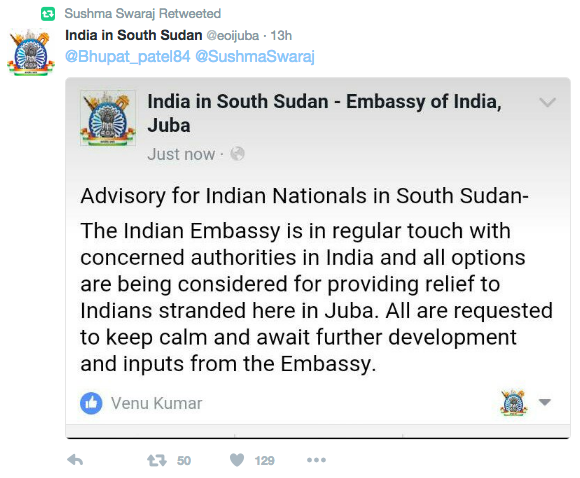 In fact, Twitter provides a tiny glimpse into the chaos in the country, with Indians stranded tweeting to the MEA and Sushma Swaraj with appeals for help amidst the heavy gun fire.

The Indian Ambassador to South Sudan, Srikumar Menon, has said that currently, all Indians in Sudan are safe. “There are about 250-300 Indians in Juba. According to the reports I have received, all of them including the staff working at Indian establishments and Indian peacekeeping contingent are safe," the ambassador told NDTV.

The conflict in South Sudan, which won independence from Sudan in 2011, has left thousands dead and over a million displaced. The conflict began with a skirmish in the capital city of Juba between forces loyal to the President, Salva Kiir, and those loyal to the former Vice President, Riek Machar, spread from a city-wide to national conflict.

The context of tribalism and frustration with government corruption fuelled the conflict, particularly in areas where the majority Dinka tribe was living alongside other tribes. The pro government and rebel forces are organised according to these ethnic dimensions, with President Salva Kiir’s Dinka tribe pitted against militia forces loyal to Machar’s Nuer people.

Kiir still maintains control of the capital and large swathes of the army, and is backed by troops from Uganda. Rebels say Kiir is a dictator, whilst pro-government factions have accused Machar of inciting a coup that led to the violence. As the two sides gain and lose territory sporadically, rights violations and civilian abuses continue despite a ceasefire signed last year. The latest flare up in violence proves that the ceasefire hangs by a thread.