NEW DELHI: Home Minister Rajnath’s Singh visit to Islamabad amid tensions between India and Pakistan has led to further strains; Singh and his Pakistani counterpart Nisar Ali Khan got caught up in war of words at the SAARC Interior Ministers’ meeting on Thursday.

Although officials were clear that there would be no bilateral meeting between Singh and Khan, and the two barely exchanged a handshake as an icy coolness has characterised Singh’s short visit, the ministers came face to face at the SAARC meeting on Thursday.

At the meeting, Singh issued a blunt message to Pakistan saying that there should be “strongest action not only against terrorists or organisations but also against those individuals, organisations and nations who support terrorism.”

Without naming Pakistani Prime Minister Nawaz Sharif, Singh said, “It also needs to be ensured that terrorism is not glorified and is not patronised by any state.”

Sharif had earlier called Hizb leader Burhan Wani a martyr. Wani was killed in an encounter by Indian security forces earlier in July, with his death leading to a huge wave of protests across Jammu and Kashmir. Dozens have been killed in the weeks that have followed, as India struggles to restore normalcy to Kashmir.

Referring, albeit not directly, to Sharif’s earlier statement, Singh said, “One country’s terrorist cannot be a martyr or freedom fighter for anyone. I also speak for the entire humanity — not just for India or other SAARC members — in urging that in no circumstances should terrorists be eulogised as martyrs.” The Home Minister called for isolation of countries or individuals who provide any kind of support, encouragement, sanctuary, safe haven or any assistance to terrorists and said, “strongest possible steps need to be taken not only against terrorists and terrorist organisations but also those individuals, institutions, organisations or nations that support them. Only this will ensure that the forces engaged in promoting the heinous crime of terrorism against humanity are effectively countered.”

While Singh’s hard hitting statements have been welcomed by many in India, Pakistani media has depicted the entire situation differently. A report in Dawn News states that Singh left the SAARC meeting abruptly after “losing a war of words” with Khan.

The report focuses on Khan’s response to Singh, specifically on the issue of freedom struggles. Without naming Jammu and Kashmir, Khan stressed on respecting the fundamental rights of people and said that legitimate freedom struggles should not be suppressed in the name of the fight against terrorism. The Pakistani Interior Minister said countries need to differentiate between freedom movements and terrorism. He added that Pakistan was one of the biggest victims of terrorism. He specifically referred to attacks on Army Public School in Peshawar, the Bacha Khan University in Charsadda and the Gulshan-i-Iqbal Park in Lahore. “Instead of engaging in a blame-game and taking swipes at each other, we should take time out to reflect and sit together to try and work out the problems and reservations that we might harbour towards each other,” he said.

Referring to the breakdown of talks between India and Pakistan, Khan pinned the blame on India, saying, “Pakistan is ready to engage in any dialogue process based on mutual respect and dignity with no strings attached. It is for those who have put conditions and sub-conditions for initiating dialogue to reconsider and realign their position.”

Singh, after listening to Khan, noted that as terrorism is a huge challenge, merely condemning it is not going to be enough. “Terrorism remains the biggest challenge and threat to our peace. South Asia continues to be deeply affected by this malady, as witnessed most recently in cowardly terrorist attacks in Pathankot, Dhaka, Kabul and other places. erely strong condemnation of such terrorist attacks is not enough. We must harden our resolve to eradicate this menace and also take serious steps to this end,” he said.

In a reference to Pakistan’s differentiation between “good” and “bad” terrorists -- where the former refers to militants in India and Afghanistan, and the latter to militants active within Pakistan’s own borders, Singh said, ““If we are to rid ourselves of terrorism, we will have to genuinely believe that attempts to distinguish between ‘good’ and ‘bad’ terrorists are misleading.”

The comments will only add further strains to India and Pakistan’s already strained relationship, which is particularly sensitive as Kashmir remains volatile. Pakistan had repeatedly tried to internationalise the Kashmir issue -- which India, on its part, maintains is an internal matter.

In fact, within hours of Rajnath Singh arriving in Islamabad, Pakistani Prime Minister Nawaz Sharif said that “Kashmir is witnessing a new wave of freedom movement" and asked diplomats to "tell the world that it is not an internal matter of India". Sharif was echoing a position that many Pakistani officials have put forth in the last few weeks, as India struggles to restore normalcy to Kashmir.

In addition to provocative comments, Singh arrived in Islamabad to a wave of protests that have led to a huge security concern for the Home Minister. Activists of All Parties Hurriyat Conference, Hizbul Mujahideen, United Jihad Council (UJC) and other groups led protests denouncing the Indian Home Minister’s visit.

Mumbai terror mastermind Hafiz Saeed led the protests, with the PTI quoting Saeed saying, “We were not expecting that the Pakistani rulers would welcome Singh who is responsible for the killings of innocent Kashmiris.” 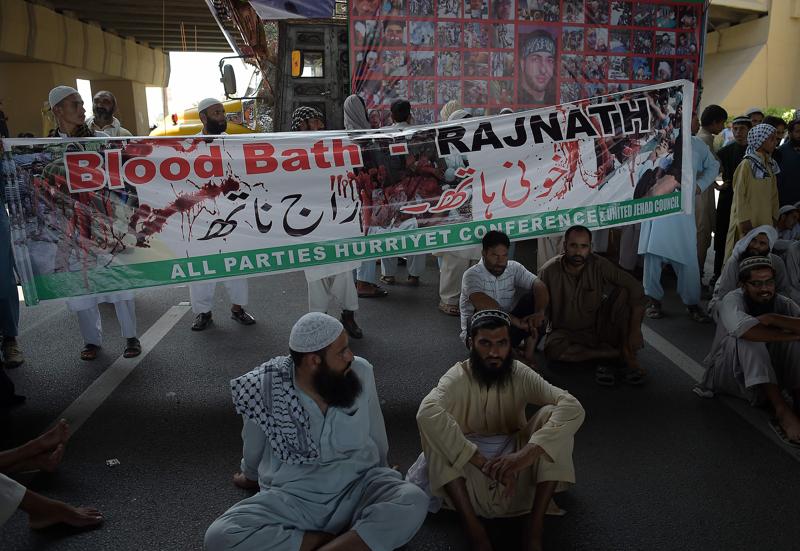 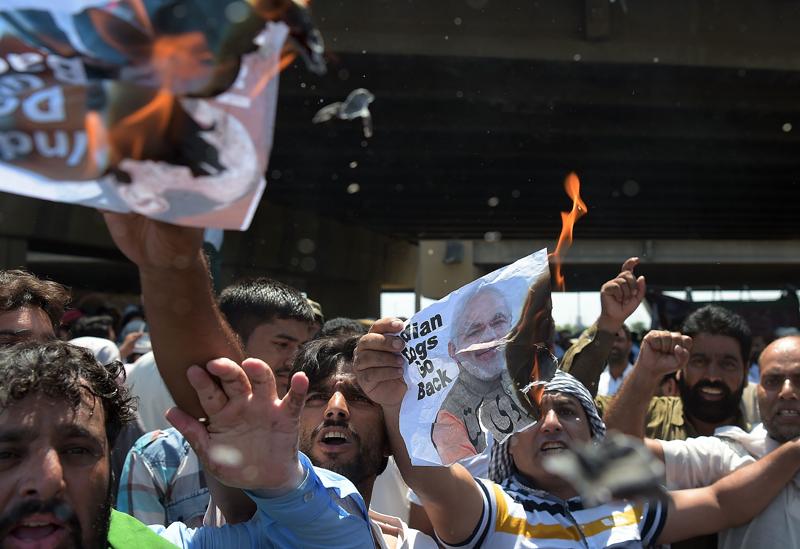 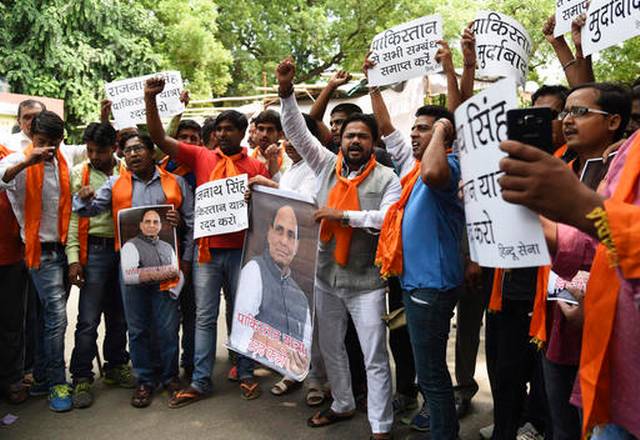 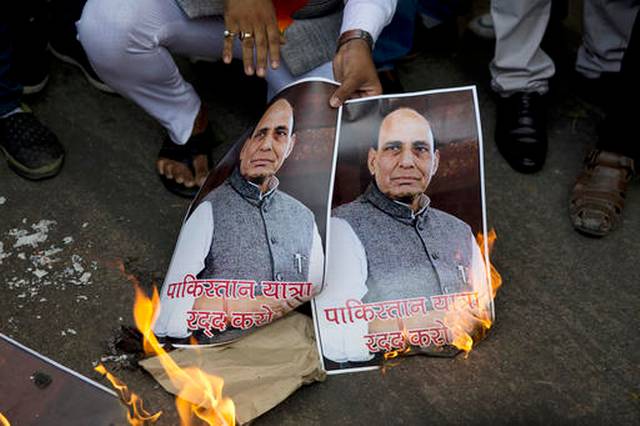 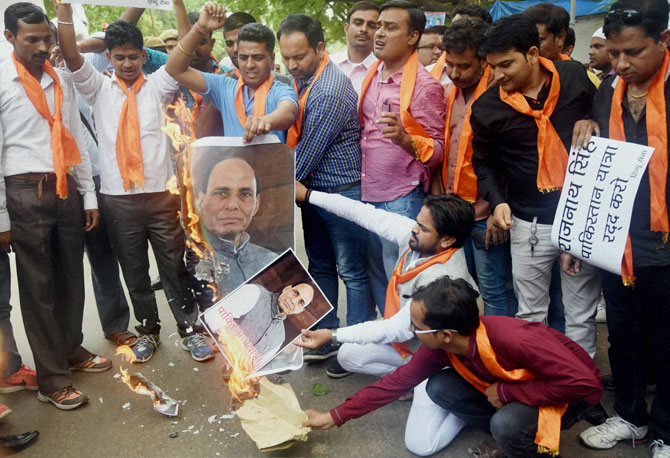 (Hindu Sena activists staging a protest against Union Home Minister Rajnath Singh for his visit to Pakistan, at Jantar Mantar in New Delhi on Tuesday. Pic/PTI)


(This article uses The Hindu’s translation of Rajnath Singh’s speech, which was originally made in Hindi. It uses a report by Pakistani newspaper Dawn for Nisar Ali Khan’s comments).