NEW DELHI: A bomb blast has killed at least 53 people at a hospital in the city of Quetta in southwest Pakistan. The attack took place at the entrance to the emergency department of the Civil Hospital, where the body of a prominent lawyer -- Bilal Anwar Kasi -- shot dead earlier on Monday was being brought.

At the time of writing, no one has claimed responsibility for the attack.

“The blast took place after a number of lawyers and some journalists had gathered at the hospital following the death of the president of the Balochistan Bar Association in a separate shooting incident this morning," said Balochistan Home Secretary Akbar Harifal as quoted by Dawn News.

Balochistan Chief Minister Sanaullah Zehri told local TV channel Geo News that Indian intelligence agency Research and Analysis Wing (RAW) was behind the attacks in Quetta. The statement was made even before initial investigations into the attack were completed in what has become a fairly common allegation for Pakistan.

Media reports suggest that the attack seems to be the doing of a suicide bomber, but police are still investigating the details. Most of those killed and injured appear to be lawyers who were accompanying Kasi’s body into the hospital when the bomb went off. 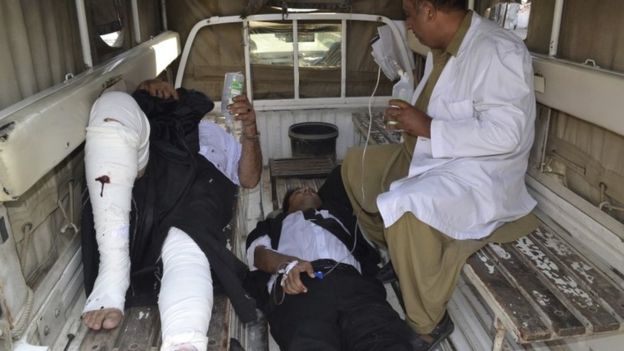 (Injured men in black and white, presumably lawyers, receive treatment in the back of a vehicle after the blast. AP).

Journalists present at the scene were also in the line of attack. Shahzad Khan, a cameraman associated with Aaj TV, was killed in the blast and Dawn News reports that of its cameramen was severely injured. 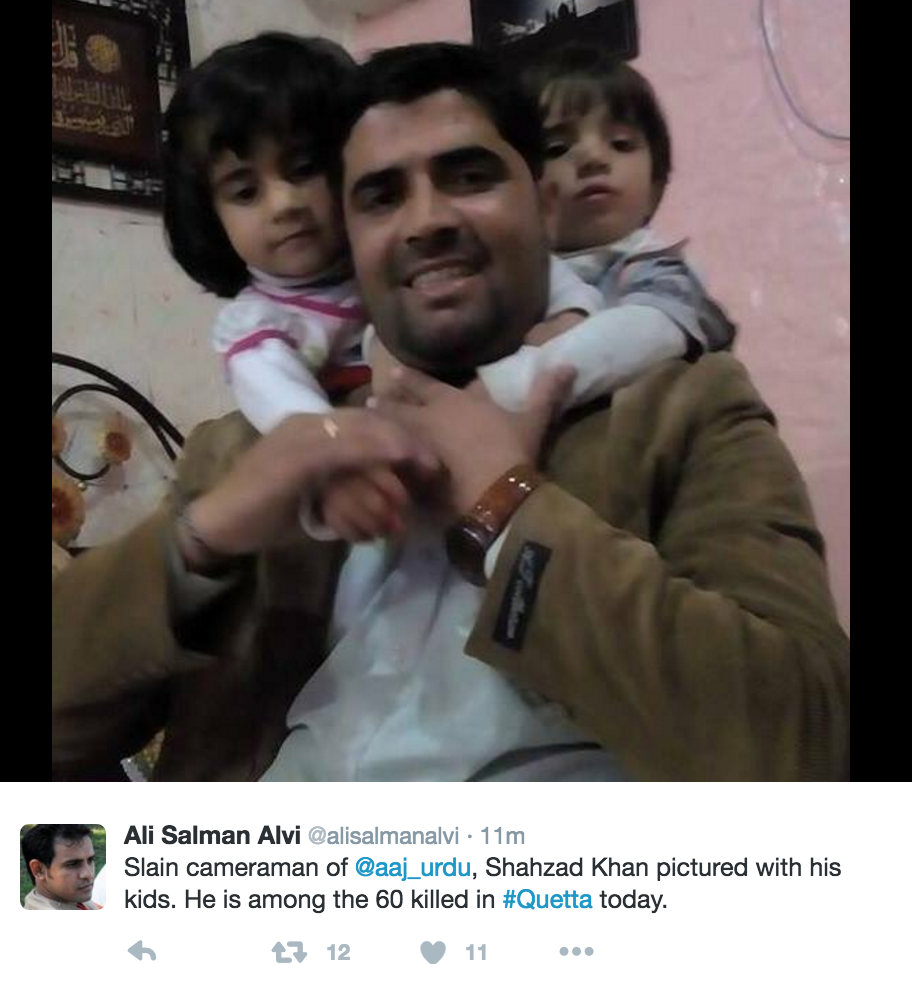 Pakistani Prime Minister Nawaz Sharif condemned the blast in Quetta, expressing “deep grief and anguish over the loss of precious human lives” in the attack. “No one will be allowed to disturb the peace in the province that has been restored thanks to the countless sacrifices by the security forces, police and the people of Balochistan,” Sharif said in a statement.

A state of emergency has been declared in Quetta and a high security alert issued across Sindh.

Balochistan is a particularly volatile province, having witnessed increasing violence for the last decade. Lawyers have not been spared, with recent killings including Jahanzeb Alvi, a lawyer who was shot dead by unknown assailants in the Brewery road area of Quetta last week on Aug 3. In fact, Kasi had condemned the killing and announced two days boycott of court proceedings. Before that, in June, the principal of University of Balochistan's law college, Barrister Amanullah Achakzai, was shot dead by unknown persons.

The province is home to an insurgency led by ethnic Baloch separatists, and the violence in Balochistan is often sectarian in nature. A power vacuum has emerged in Balochistan, creating a potentially explosive environment in this southeastern province that borders volatile areas in Afghanistan.

The repressive measures adopted by the Pakistani government have weakened the social structures capable of containing radicalism. This is evinced by the fact that most Baloch nationalist parties began by articulating their discontent not in the demand for independence but within the legal framework of the constitution to demand more autonomy and rights. Over the years, in large part because of the repressive tactics adopted by the State, the Baloch nationalist movement has gotten more radicalised. The irony lies in the fact that the measures adopted by the Pakistani state are reinforcing the threat of ethnic nationalism whilst seeking to eliminate these separatist elements.

In addition to nationalist groups such as the Baloch Liberation Army (BLA), the Baloch National Movement, the National Party, the Balochistan National Party, and the Baloch Student Organisation, there has been an increase in sectarian groups in a province traditionally known for its secularism. Afghan and Pakistani Taliban (Tehrik-e-Taliban Balochistan), al-Qaeda, Lashkar-e-Janghvi, Sipah-e-Sahaba Pakistan, Imamia Student Organization, and Sipah-e-Muhammad have reportedly established their presence in the province.

Analysts ascertain that the Sipah-e-Sahaba and Lashkar-e-Janghvi possibly enjoy official protection, as they continue to hold major rallies publicly in the face of a ban. There has been an expansion of operational spaces for violent sectarian groups to function within, in Pakistan nationally, and in Balochistan specifically, as the government’s capacity and perhaps even willingness to investigate, prosecute and convict those involved in violent attacks is compromised.

This lacking government capacity was the focus of a report by the Human Rights Commission of Pakistan (HRCP), which stated that the provincial government is “nowhere to be seen.” In fact, the government’s repressive tactics in Balochistan may be the single most contributing factor to increasing militarisation and sectarianism in the province. The “kill and dump” operations, which were designed to reinforce the power of the state, have led to widespread anger and discontent targeted at the government for abductions and killings. The exact numbers are difficult to tally, but Baloch nationalists assert that there have been “thousands” of such cases.

The International Voice for Baloch Missing Persons says 18,000 people from the region are unaccounted for, of which approximately 2000 were killed between 2001 and 2013. There are vast discrepancies in the official numbers. In 2008, Interior Minister Rehman Malik placed the figure at 1100. However, in 2011, Balochistan Home Minister Zafrullah Zehri claimed that only 55 people were missing. The discrepancy in numbers is evinced in a report documented by VBMP’s Chairman Nasrullah Baloch, where 455 bullet-riddled bodies were discovered from amongst the missing in 2014; not 164 as the provincial government claimed in a statement.

While there is contention on the numbers, there is an emerging consensus, amongst organizations including the Human Rights Watch and the HRCP, that most of these disappearances have been perpetuated by government institutions, specifically the intelligence agencies and Frontier Corps, often in conjunction with the local police.

It is important to note that the repressive measures are furthering sectarianism in a region where a resolution through dialogue and within the constitutional framework is politically feasible. According to a survey conducted in July 2012, only 37 percent of the Baloch people favour independence, a figure even lower among Balochistan’s Pashtuns. However, 67 percent of the population wants greater autonomy. This indicates the possibility for compromise through political negotiation. The government of Pakistan has to stop treating Balochistan as a law-and-order problem; its insistence on doing so by responding to the crisis through repressive measures will only lead to an increase in the numbers favouring independence and a rise in violence in the region.