NEW DELHI: Authorities in Pakistan continue to round up leaders of the Muttahida Qaumi Movement (MQM) in the wake of a controversy sparked by exiled chief Altaf Hussain. Accusing Hussain of treason, Pakistan cracked down on the Karachi-based party and sealed and bulldozed party offices on Thursday.

The latest arrests included the party’s MNA Asif Hasnain and Sindh Assembly member Shiraz Waheed. Dawn News reports that police sources confirmed the move and the MQM in a statement expressed concern over the action against the elected representatives. “The MQM is a patriotic and democratic party. But still its MNA Asif Hasnain and MPA Shiraz Waheed were arrested in false cases,” the statement says.

The action comes even as MQM chief Altaf Hussain handed over party affairs to the Coordination Committee, MQM spokesperson Wasay Jalil announced following a turbulent few days that saw protests, one death, and Hussain being accused of treason.

Taking to Twitter to make the announcement, Jalil posted a statement on behalf of Hussain saying that the MQM chief will be handing over all decisions of reorganisation, implementation on policy issues and other matters to the Rabita Committee. "I will continue to focus on improving my health in line with the Coordination Committee's suggestions," the statement read, adding that the party leader was "under acute stress" due to back-to-back 'incidents', upsetting news and working on party business day and night. 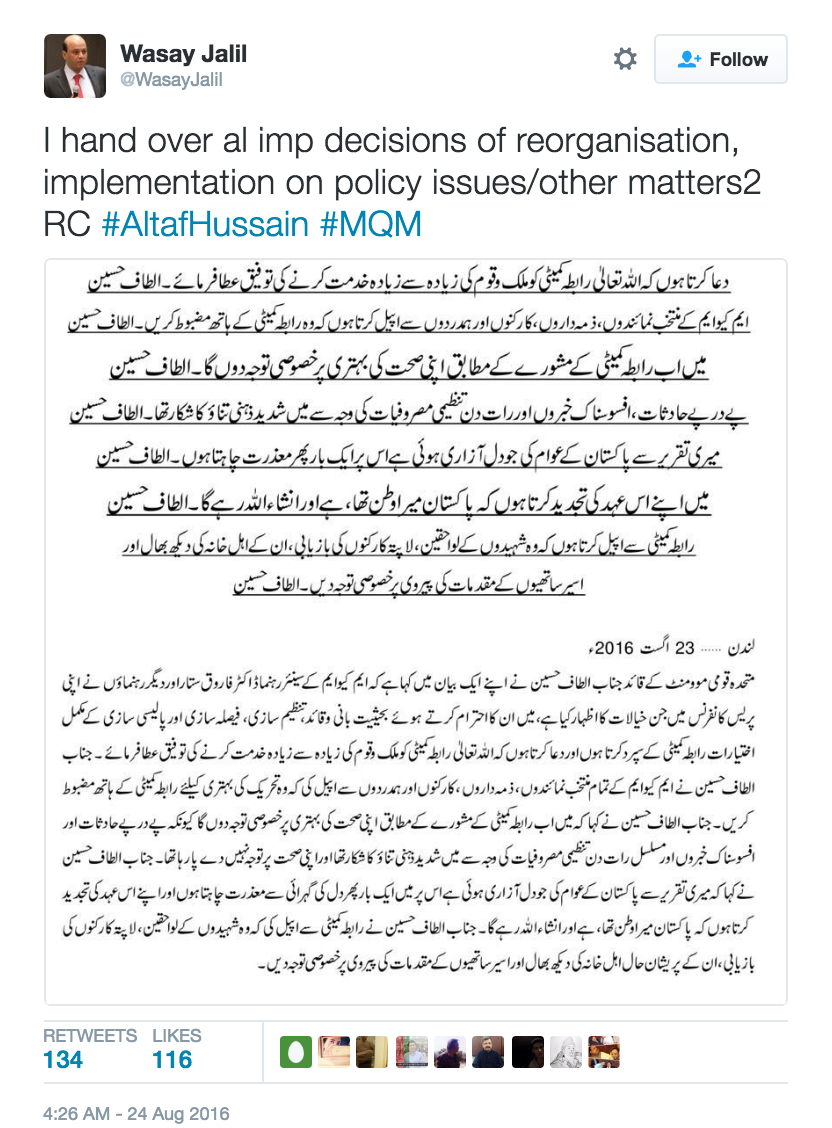 This announcement comes after a few MQM leaders in Pakistan moved to distance themselves from Hussain. Speaking at the Karachi Press Club on Tuesday, Farooq Sattar announced: "From now onwards, decisions will be made in Pakistan. This message is for the London office as well as for Pakistan office-bearers; something which the Quaid won’t disagree with."

The chaos all began on Tuesday when MQM supporters gathered outside Karachi’s press club, protesting what they called a “media bias” toward a hunger strike undertaken by them 10 days ago. Hussain -- who is in London, and has been there in exile for the last 24 years -- picked up the phone and addressed the crowd via large loudspeakers. The MQM chief described Pakistan as “a cancer” and “the epicentre of terrorism,” prompting Pakistani authorities to file a case of treason against him.

Pakistani authorities have filed a second case of incitement to violence, as the blame Hussain for the action of MQM supporters who stormed the offices of two media channels in Karachi. As protesters clashed with security forces, at least one person was killed and several others injured.

Reports from Pakistan suggest that the attackers were all MQM party workers, although party leaders have pointed to a conspiracy. MQM MNA Syed Ali Raza Abidi tweeted, "MQM has been protesting since past 3 years non-violently. Regretfully masked men pre-present at Fawara Chawk created these deplorable scenes." In a second tweet, Abidi said: "Disassociate yourself from violent mobs sent for a purpose!"

Pakistani Prime Minister Nawaz Sharif strongly condemned the violence, calling the attack on media channels “an attack on freedom of Press and expression”.

Pakistani authorities responded by sealing off the MQM headquarters and taking leaders into custody. Hussain left Pakistan over two decades ago, after the announcement of ‘Operation Clean Up’ in 1992, which referred to an armed military intelligence programme led by the Pakistan rangers with assistance and coordination from the army and its intelligence divisions. The operation sought to target “anti social” elements in the city of Karachi, particularly the MQM. The party had proposed the Jinnahpur Plan at the time, seeking the breakaway of Karachi from Pakistan, to be governed as an autonomous state for the Karachi-based Urdu speaking Muhajir community. A month ahead of the launch of the Rangers operation, Hussain fled Pakistan and sought political asylum in London, where he has remained since.