NEW DELHI: Remember the haunting image of Sharbat Bibi clicked by photographer Steve McCurry for National Geographic in 1984? Immediately, she shot into limelight for being the ‘Afghan Girl’, as her face rippled across international boundaries, creating a silent hullabaloo, signifying what war, poverty and bloodshed can do to a human being. Well, again after so many years, she has once again caught the attention of international media. Sharbat Bibi has been arrested by Pakistan’s Federal Investigation Agency(FIA) on the grounds of corruption. According to the FIA, she -- the ‘Mona Lisa of Afghan War’ -- had forged her identity, she had both Afghan and Pakistani nationality and both her identity cards were later recovered from her residence.

Bibi who is now in her 40s was being investigated by the Pakistani Authorities for the past few years. After being caught, she has been charged under Section 419, 420 and 5(2) dealing with the Prohibition of Corruption Act. “FIA arrested Sharbat Gula, an Afghan woman, today for obtaining a fake ID card,” Shahid Ilyas, an official of the National Database Registration Authority (NADRA), told AFP. 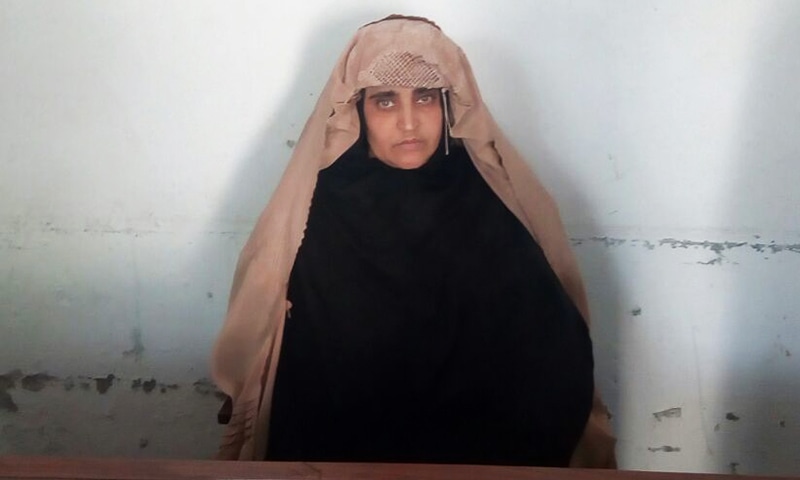 As the world is still reacting to this news, the first and foremost question that needs to be answered is what happened to the officer who gave her the identity cards? Well, quite ironically, the officer is now working as the deputy commissioner in customs. In order to avoid arrest, he got bail before arrest issued for him. It’s quite unjust that on one hand, Bibi would suffer while the ones in the system, who are responsible for carrying out such phenomenon, would remain in the echelons of power.

To cover up the issue, three officials hailing from the National Database and Registration Authority (NADRA) have been suspended for illegally granting her the identity cards, though it has not been revealed whether they were really involved in this case, or is their arrest a mere cover-up to hide the real culprit.

More significantly, the real problem seems to be brushed under the carpet. Faik Ali Chachar from NADRA stated that the number of fake identity cards in Pakistan is on the rise. Sharbat’s case is one in the thousands that had been sent to the FIA. According to the estimates, 2.5 million Afghan refugees are still in Pakistan, prompting the UNHCR to acknowledge it as the “largest protracted refugee situation globally”. Since 2009, Islamabad has repeatedly pushed back a deadline for these Afghan refugees to return, but fears are growing that the latest cutoff date in March 2017 will be final.

For Sharbat Bibi, the trials and tribulations have not ended. She now faces 14 years of confinement and fine of up to 5,000 dollars if she is convicted by the court on the charges of fraud. Her case, further, goes into the heart of the ordeal confronting Afghan refugees who have fled across the border into Pakistan in a bid to escape decades of war. Pakistan’s crackdown on Afghan refugees seems to have intensified since former Taliban leader Mullah Akhtar Muhammad Mansour was killed in a drone strike in Balochistan Province in May this year.

Afghans in Pakistan are facing discrimination and lack of identity. Instead of endowing them legal residence as they have spent a large number of years in Pakistan, Afghans are still suffering. For example, the Pakistani government had extended the Proof of Residency to Afghans only till end of 2016, and now to March 2017. Gerry Simpson, a senior researcher and advocate for the Refugee Rights Program at Human Rights Watch, wrote that 1.5 million Afghans in Pakistan have received “proof of registration” cards, which protected them from deportation. About one million more who did not get the paperwork resorted to using false identity cards.

Afghan refugees face harassment, extortion and threats on an everyday basis. Recently, Abdul Qadir Baloch, Lt. Gen. (Rtd.), had stated that it was high time that Pakistan makes ‘tougher laws’ for Afghan refugees. On 28th June, the Khyber-Pakhtunkhwa’s police had arrested more than 2000 Afghans who have been staying illegally. Mushtaq Ghani, the official spokesperson of this area stated that Afghan refugees will have to strictly remain in their camps and they would not have the freedom to move around freely. Pakistan envisages these refugees as a major threat to their security and hence, the government is becoming stricter regarding their stay, leading to these wide arrests.

Further, Pakistan does not have the strong policy to avoid the influx of these refugees, that happens year after year, as the border between Pakistan and Afghanistan is still porous. Instead of insuring the protection of such refugees, the Pakistani government is treating them with hostility. The arrest of Sharbat Bibi, therefore, represents deeper complications, specifically relating to Pakistan’s refugee policy, position on cross border terror and the ensuing plight of those people desperate to escape war. International organisations, including Human Rights Watch (HRW) have spoken against the forceful return of Afghanistan refugees from Pakistan, reminding the government of their obligation to protect all Afghans in the country, including those not registered as refugees.

Photographer Steve McCurry who took the photograph of Sharbat Bibi in the 1980s said that he was informed of her arrest. “I am committed to doing anything and everything possible to provide legal and financial support for her and her family,” he said in a statement released Wednesday. “We object to this action by the authorities in the strongest possible terms,” he said. “She has suffered throughout her entire life, and we believe that her arrest is an egregious violation of her human rights.”