The report notes a huge decline in the territory controlled by the American-supported Afghan government with corresponding increase in influence of the Taliban and other militant groups, including the Islamic State. In a worrying assessment, the report notes that the Afghan government had 57.2 percent of the country under its control by the end of 2016 — a 6.3 percent decrease from 2015.

“U.S. Forces Afghanistan (USFOR-A) reported that approximately 57.2% of the country’s 407 districts are under Afghan government control or influence as of November 15, 2016, a 6.2% decrease from the 63.4% reported last quarter in late August, and a nearly 15% decrease since November 2015,” the report states. 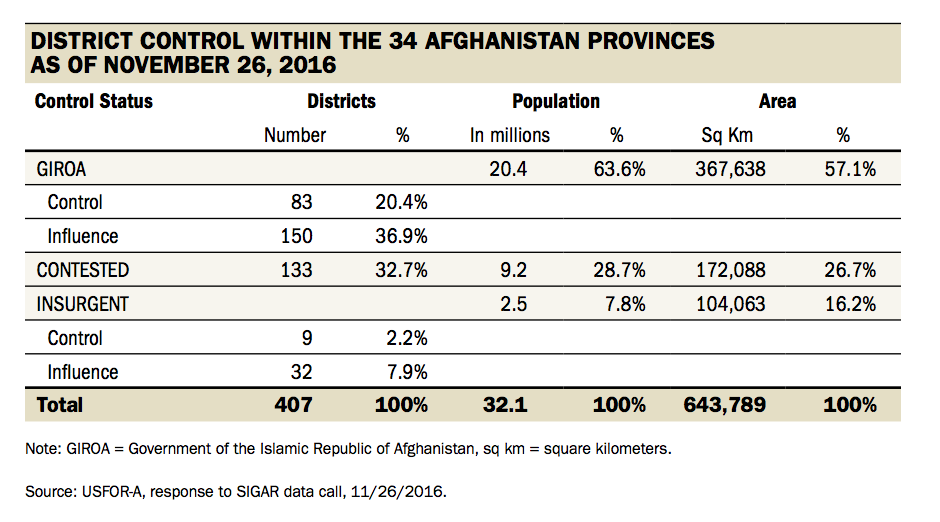 The report is the first such report presented since the new US President, Donald Trump, assumed office, and reflect the urgency that Afghanistan should be accorded in the new administration’s foreign policy mantle. On the contrary, Trump has remained relatively silent on Afghanistan, with the little that he has said being largely contradictory. “With a new Administration and Congress taking office, this is a prime opportunity to reflect on the U.S. investment in Afghanistan. Since 2002, Congress has appropriated more than $117 billion for Afghanistan’s reconstruction. It is the largest expenditure to rebuild a country in our nation’s history. This tremendous amount of taxpayer money has been used to train Afghan security forces, stand up the Afghan government, provide health care and education to the Afghan people, and develop the Afghan economy,” the report notes.

The report also comes in light of the fact that the US has spent more than $117 billion in Afghanistan since 2002; thousands of lives have been lost; and foreign troops -- despite plans to withdraw them completely -- remain in Afghan territory. At the same time, the Taliban and allied groups have seen some of their biggest victories in the last year -- with the provinces of Kunduz and Helmand now almost entirely under their control.

While officials in Kabul and the US administration both repeatedly deny that the Taliban is gaining momental ground, reports from the ground differ. The SIGAR report corroborates those reports noting the continuing decline in territory under government control, with Kabul now exerting its influence over just a little over half of Afghanistan. Further the report notes that displacement is at an all time high. In 2016, 583,000 people fled their homes due to conflict. SIGAR added that that is “the highest number of displacements since record keeping started in 2008.”

Further, the report states that despite US efforts to curb the drug trade in Afghanistan, opium production and cultivation is at an all time high. In 2016, opium production in Afghanistan rose 43 percent from 2015 levels. Opium is the country’s largest export, supplying 90 percent of the world’s opium and bankrolling the Taliban in the process.

The report spells a worrying picture as almost every trend indicates a downward spiral. In highlighted quotes, the Inspector General warns, ““Unfortunately in the nearly five years I’ve been traveling to Afghanistan, I first witnessed the United States put in way too much, way too fast. More recently, I’ve watched the U.S. remove way too much, way too fast. Policy makers both in Congress and the new Trump Administration should take note of this.”