JERUSALEM: Hunger strikes don’t get any easier with experience.

So says the family of Palestinian prisoner Majd Ziada, who has participated in multiple collective strikes since his arrest by Israeli occupation forces in 2002.

“It is as if you are carrying the weight of 15 years of imprisonment on your shoulders,” Hurriyah Ziada, Majd’s youngest sister, told The Electronic Intifada. “It is like running the last kilometers of a marathon: at the start you have a lot of energy but you eventually become drained.”

Majd, whose family hails from the village of al-Faluja northeast of Gaza City, ethnically cleansed by Zionist forces in 1948, was 19 when he was swept up during a wave of mass arrests at the height of the second intifada.

He spent 50 days in incommunicado detention, during which he was subjected to physical and psychological torture, his father and lawyer say. The abuse exacerbated preexisting ear inflammation, resulting in a complete loss of hearing in Majd’s right ear.

During a hearing in an Israeli military court the year of his arrest, Majd proclaimed that he did not recognize the court’s legitimacy and that it was Israeli soldiers who should be put on trial.

Majd was convicted of carrying out armed attacks and organizing a resistance cell, receiving a 30-year prison sentence.

Majd, who was arrested in the occupied West Bank city of Ramallah, has most recently been held in Hadarim prison, in central Israel. The Fourth Geneva Convention forbids an occupying power such as Israel from transferring detainees from the territory it occupies, such as the West Bank, into its own territory. Majd’s imprisonment in Israel is thus a war crime.

In her most recent visit to Hadarim, on 12 April, Hurriyah was told by Majd that he was planning to join the open-ended hunger strike set to begin five days later.

One of the main demands of the hunger strike is to end medical negligence of prisoners.

“[Majd] requires surgery to his ear and he is at risk of losing his hearing completely if it’s not performed,” Hurriyah said. “But the Israel Prison Service has refused to allow it and the only treatment he has received has come in the form of painkillers.”

Israel has punished hunger striking prisoners with a series of measures, including denying family visits and meetings with lawyers. All Hurriyah knows about her brother is that he was transferred from Hadarim and put in isolation. She does not know where he is currently being detained.

Palestinian prisoners on hunger strike are also protesting solitary confinement, night raids on prisoners’ cells, humiliating searches, the reduction of family visits, a ban on mobile phones, suspension of university education, restrictions on books and magazines, and widespread imprisonment without charge or trial, family members of striking prisoners and their lawyers told The Electronic Intifada.

“Through the battle of empty stomachs, prisoners are not only calling for their basic rights and demanding an improvement in prison conditions,” Abdel Nasser Ferwana, a writer who has done extensive research on the history of Palestinian hunger strikes, told The Electronic Intifada.

“They also seek to express their defiance, to reinvigorate public solidarity with the prisoners’ cause and to draw attention to their plight.”

A dangerous tactic of last resort, the first known hunger strike in the history of the Palestinian prisoners’ movement was in 1968, one year into Israel’s military occupation of the West Bank and Gaza Strip. Inmates at a prison in Nablus waged a three-day hunger strike protesting physical abuse and humiliating treatment by Israeli soldiers.

The first Palestinian prisoner to lose his life during a hunger strike was Abd al-Qader Abu al-Fahm, who died after being force-fed during a mass strike in Ashkelon prison in 1970.

Ferwana said that the current hunger strike is not an isolated event and is part of a long history of struggle.

“We need to remind people that Palestinian prisoners improved their conditions in jails and attained some of their rights thanks to their sacrifices, rather than Israeli generosity,” Ferwana said. “Some have lost their lives to secure those rights but this has been the most effective form of resisting and confronting the Israeli prison system.”

According to the Palestinian rights group Addameer, Israel currently holds 6,300 Palestinian political prisoners, 500 of whom are held without charge or trial under indefinitely renewable administrative detention orders issued by a military court.

Administrative detention has been the impetus for some of the more high-profile hunger strikes in recent years, such as those undertaken by Khader Adnan – a baker from the northern West Bank who has embarked on two lengthy strikes, becoming an icon of the prisoner movement – as well as journalist Muhammad al-Qiq, lawyer Muhammad Allan, and Bilal Kayed, who won his release after 15 years of imprisonment following a 71-day strike.

Esmat Mansour, who was imprisoned by Israel between 1993 and 2013, said this is a direct result of the fragmentation of the prisoners’ movement – a spillover of the bitter impasse between the two main Palestinian political parties, Fatah and Hamas, that has prevailed over the past decade.

Mansour pointed to the August 2004 mass hunger strike – which lasted up to 19 days, depending on the prison, yielding little improvement in prisoners’ conditions – as a turning point.

Several factors contributed to the failure of that strike, according to Mansour: the harsh repression of the Israel Prison Service, then headed by Yaacov Ganot. Mansour described Ganot as a “fascist,” adding that he reintroduced the practice of strip-searching and ordered the separation of prisoners from their visiting family members with glass instead of a net that allowed for physical contact.

The second intifada was still going on and Ariel Sharon, Israel’s prime minister at the time, was not willing to compromise. This was the first hunger strike for many of the prisoners, and they lacked experience to deal with the inevitable Israeli retribution.

“The leadership of the strike was divided and the fragmentation of the prisoners made it easier for the [prison authorities] to quell it and break our spirits,” Mansour, who participated in that strike, told The Electronic Intifada.

“It took a long time and effort for the prisoners’ movement to recover from that setback and to restore confidence among prisoners and rebuild the movement.” 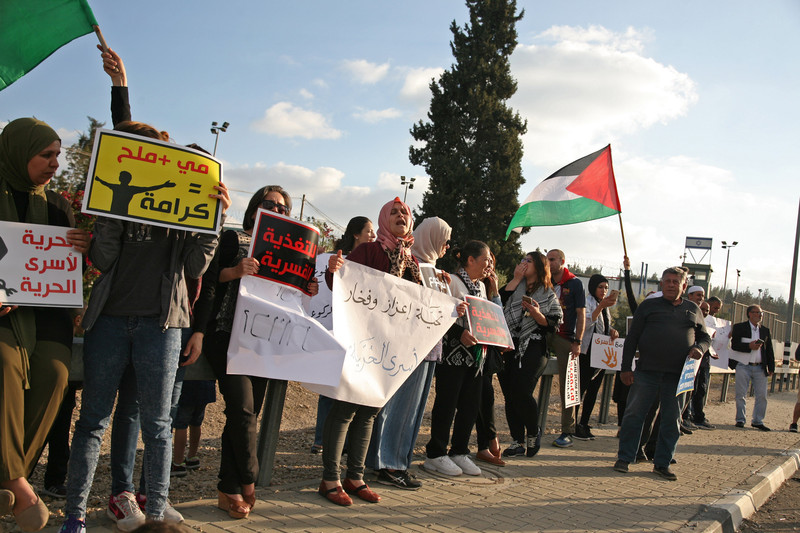 It wasn’t until 2012 that prisoners from all political factions organized another sustained mass hunger strike involving multiple prisons and political parties.

Preceded by a series of individual hunger strikes in protest of administrative detention, thousands of prisoners began an open-ended strike on 17 April 2012 – Palestinian Prisoners’ Day – and refused food for nearly one month.

The hunger strikers demanded an end to solitary confinement for all prisoners and a resumption of family visits to prisoners from the Gaza Strip. Such visits had been done away with following the capture of an Israeli soldier in Gaza in June 2006 and maintained even after the soldier’s release in a prisoner exchange deal in October 2011.

The 2012 hunger strike was accompanied by popular protests and escalated mobilization on the ground, not seen in Palestine since the early days of the second intifada more than a decade earlier. Even though the Fatah leadership did not participate in that hunger strike and was even accused by some prisoners of not showing enough solidarity, according to Esmat Mansour, the Fatah base in the prisons did join the strike.

The agreement reached between Palestinian detainees and the Israeli prison authorities in May 2012 was said to include limitations on administrative detention, the end of prolonged isolation and resumption of family visits to prisoners from Gaza.

Five years on, Palestinian prisoners are having to resort to their empty stomachs again to fight for their rights.

“Prisoners have been preparing for this hunger strike for almost two months and my husband confirmed to me on 4 April that he was taking part,” said Khalida Hamdan, whose husband, Muhammad Mesleh, is sentenced to nine life sentences plus 50 years for his involvement in the killing of nine Israelis.

“I initially questioned his decision but he explained to me how the increasing crackdown by Israeli prison authorities had left them with no other option,” Hamdan told The Electronic Intifada.

Mesleh, a leading figure in Fatah’s armed wing, the al-Aqsa Martyrs Brigades, was arrested by Israeli occupation forces on 17 February 2001, leaving Hamdan to raise their months-old child on her own. For almost a decade, Hamdan was banned from visiting her husband on security grounds. In 2012, she went on hunger strike for seven days in solidarity with her striking husband.

Mesleh is a close companion of Marwan Barghouti, the high-profile Fatah leader serving multiple life sentences after his arrest in 2002, and the face of the current hunger strike.

“He pleaded with me to not go on a solidarity hunger strike this time around but since 17 April, I have been unable to cook, unable to sleep properly or think about anything else,” Hamdan said.

“I only hear about him in the media. Is he in solitary confinement? How is he handling pain and fatigue? How is he surviving the revenge of the prison guards? You cannot exorcise those thoughts when a loved one is on hunger strike.”

The current hunger strike, estimated by Addameer to include 1,500 prisoners, is being led by Fatah, but prisoners from all the major Palestinian factions are participating.

Following his release from Israeli prison on 20 April, former Palestinian minister Wasfi Qabaha said that the hunger strike in Hadarim prison, the epicenter of the protest, involved prisoners from all factions and that parties from across the political spectrum were represented in the strike leadership.

He added that strike leaders such as Marwan Barghouti and Karim Younes, the longest-serving Palestinian political prisoner currently held by Israel, were transferred to Jalameh prison and put in isolation.

Nadim Younes, brother of Karim Younes, who has been imprisoned by Israel since 1983, told The Electronic Intifada that family and lawyers lost all contact with Karim since he began his hunger strike.

“Karim is now 58 and 35 years of imprisonment have definitely taken their toll on his ailing body,” Nadim said. “The importance of this strike lies in the fact that it has brought together prisoners from all factions and from all over Palestine: Gaza, West Bank, Jerusalem and Palestinians from the ’48 territories [present-day Israel].”

There are lingering doubts about whether this hunger strike will avoid the failure suffered in 2004. Former prisoner Esmat Mansour does not dismiss those concerns.

“It is true that Barghouti is the undisputed leader of this hunger strike. Some believe that he is trying to send a message to the Fatah Central Committee that he remains an influential leader,” Mansour said.

“But prisoners are not puppets: they would not join this strike if they didn’t have pressing demands. And Marwan’s leadership of this strike has definitely given it momentum and unprecedented media attention.”

The unity and resilience of the prisoners’ movement in the face of Israeli repression, intimidation and attempts to delegitimize the strike are being put to the test. Moreover, it is a test of the capacity of Palestinian society to mobilize in support of the prisoners, to build sustained pressure on Israel, and overcome their divisions to stand behind the prisoners.

If there is one cause that has managed to bring Palestinians together in recent years, it has proven to be the prisoners’ struggle.

(Budour Youssef Hassan is a Palestinian writer based in Jerusalem.)