How Israel Friends of Labour Tried to Undermine Jeremy Corbyn

LONDON: Thursday’s general election was an earthquake for the UK’s political establishment.

And although the issue did not feature in the campaign, the result has significant implications for the Palestinian cause.

Labour Party leader Jeremy Corbyn has been a lifelong supporter of the Palestinian struggle for justice.

In an August 2015 interview with The Electronic Intifada, he called for an arms embargo on Israel and supported other key elements of BDS, the boycott, divestment and sanctions movement for Palestinian rights.

His party’s 2017 manifesto pledged that a Labour government would “immediately recognize the state of Palestine” – a position the governing Conservatives oppose.

Due to his positions on Palestine, throughout 2016 Corbyn faced a relentless, manufactured campaign charging that under his leadership the Labour Party was rife with anti-Semitism.

A witch hunt by the party machine led to dozens of members being suspended on baseless or grossly exaggerated accusations pushed by a hostile media establishment, right-wing Labour lawmakers and Israel lobby groups.

In some cases, accusations of left-wing anti-Semitism were entirely fabricated.

Even the head of Labour Friends of Israel, lawmaker Joan Ryan, was caught by an underdercover Al Jazeera investigation broadcast in January fabricating allegations of anti-Semitism against a party member who questioned Israel’s settlements in the occupied West Bank.

A lobby group within the party, Labour Friends of Israel coordinates its activities with the Israeli embassy, which has provided funding to secretive efforts to win lawmakers over to Israel’s cause.

Last week Ryan was re-elected as Labour member of Parliament for Enfield North. Like many in her party she rode Corbyn’s coat tails to an increased majority – despite her own efforts to sabotage the Labour leader and other supporters of Palestinian rights.

In a letter sent to her own constituents, obtained by The Electronic Intifada, Ryan talked down Corbyn’s chances of winning, claiming that “many” local people “tell me they have more confidence in Theresa May as prime minister than they would have in Jeremy Corbyn.”

Despite “your misgivings about the Labour leadership,” Ryan wrote, “I hope that you will consider voting for me as your local MP.” She promised if re-elected “to work for a Labour Party that once again can deserve your confidence” – a not so subtle suggestion that it did not deserve their confidence in this election.

Her letter echoed the complaints of several right-wing Labour candidates who told media – usually anonymously – that they would be fighting “local” campaigns to distance themselves from Corbyn and the Labour manifesto.

Another key figure in the efforts to smear Corbyn and the Labour Party is veteran Israel lobbyist Jeremy Newmark, Labour’s candidate for a North London seat.

The Jewish Chronicle reported that Newmark ran a similar anti-Corbyn campaign in the Finchley and Golders Green constituency where he contested the election.

The paper reported Newmark saying “that voters should support him in the knowledge that Jeremy Corbyn will not become prime minister.”

Newmark told the paper that he had “regularly challenged the leader face to face and he has heard my view directly that he has failed to demonstrate sufficient understanding of the nature of modern anti-Semitism.”

Newmark became chair of a revived Jewish Labour Movement in February 2016. Soon after, the JLM was at the center of efforts to hype up the anti-Semitism crisis.

Newmark has a well-documented record of making false accusations of anti-Jewish bigotry as part of his efforts to silence and discredit the Palestine solidarity movement.

A longtime Israel lobbyist, Newmark was revealed by Al Jazeera’s undercover investigation in January to still be working closely with the Israeli embassy during the 2016 Labour Party conference. 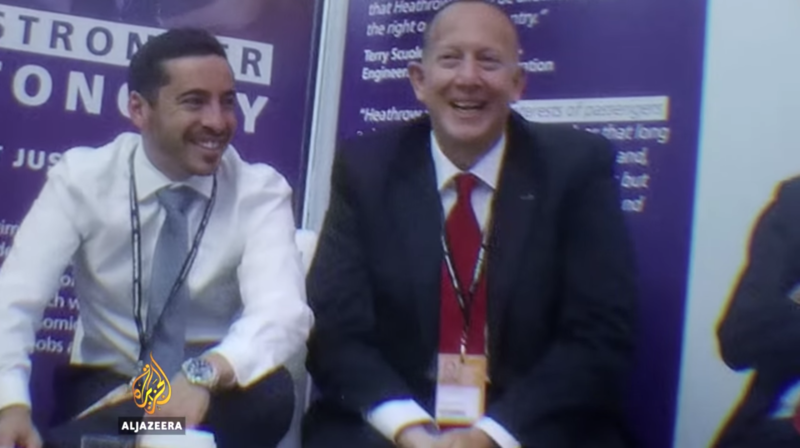 He was filmed at a closed-door meeting joking and discussing strategy with disgraced embassy agent Shai Masot and Ambassador Mark Regev.

Israel quickly called Masot back to Tel Aviv after the Al Jazeera investigation made headlines. Masot had been caught on video plotting with a civil servant to “take down” a senior British government minister perceived as critical of Israel.

Despite his record of dishonesty, Newmark was selected as a Labour candidate. He then used his media platform in an effort to revive the discredited anti-Semitism smears.

Even as Corbyn’s poll numbers were surging, Newmark claimed to the BBC that “Jeremy Corbyn appears to have failed to understand the nature of contemporary anti-Semitism.”

On election day, Newmark failed to take the seat from Conservative incumbent Mike Freer – who is also staunchly pro-Israel.

In a debate on the J-TV YouTube channel, Katz’s Conservative opponent Matthew Offord accused Katz of being “put up” to fight the seat by the Labour establishment, in an area with a significant Jewish population.

“The local party did not chose you. You were imposed,” Offord claimed. Katz denied being imposed by the party machine, though he acknowledged that he was not chosen by the “traditional process.”

The Conservative lawmaker may have had a point.

The Skwawkbox, a well-informed pro-Corbyn website, reported evidence that Labour Party headquarters had funnelled campaign resources away from seats being contested by pro-Corbyn candidates and towards so-called “moderates.”

The Electronic Intifada understands that there was a power struggle between the party establishment in Labour headquarters and Corbyn’s office over the list of candidates, with the latter being outmaneuvered in many cases.

After the election, Katz claimed that the anti-Semitism allegedly rife in the Corbyn-led Labour Party had been a factor in his defeat.

Newmark and Katz took a break from campaigning last month to participate in an Israeli embassy reception celebrating Israel’s “independence” – the 1948 ethnic cleansing of 750,000 Palestinians from their homeland – as well as the 50th anniversary of Israel’s military occupation of East Jerusalem.

The irony for people like Joan Ryan, and her fellow Labour “friend of Israel” Wes Streeting – another vocal stoker of the anti-Semitism allegations last year – is that the massive swings to Labour achieved by the Corbyn-led party often saved them in their seats.

The surge in turnout for Labour even helped Streeting substantially increase his razor-thin majority.

During the campaign, Streeting also bad-mouthed his party, reviving the anti-Semitism allegations and telling voters he would “fight relentlessly to get Labour back to being an effective opposition and alternative party of government that’s actually worth their support.”

Clayton Swisher, head of Al Jazeera’s investigative unit, commented on Twitter that the UK election result was a loss for Israel’s “covert influence campaign” in the UK.

A key element in that campaign was the effort to attract Labour-leaning youth to Israel’s cause. It has clearly made no headway.

Swisher predicts that the result will lead to a crisis at Israel’s strategic affairs ministry – the government department which spends tens of millions of dollars to fight BDS and to market Israel to progressive Western audiences.

Though short of the seats he needs to become prime minister, Corbyn pulled off stunning gains when the consensus outside the grassroots movement that supported him was that Labour would suffer an historic defeat.

Labour saw its share of the vote surge to 40 percent, just behind May’s Conservatives who in a stunning upset lost their parliamentary majority.

One of his most bitter critics, the staunchly pro-Israel pundit Stephen Pollard, noted that, in terms of the increase in vote share, the Labour leader had outperformed every one of his predecessors since Clement Attlee’s landslide win against Winston Churchill in 1945.

That Labour government created the National Health Service and the postwar welfare state that brought millions of people out of sickness and poverty.

Without a majority, May has done a deal with Northern Ireland’s hard-right Democratic Unionist Party, which has a history of sectarian bigotry and ties to violent extremist groups. The Christian Zionist DUP’s 10 seats will allow May to cling to office in exchange for as yet unspecified concessions.

Even May’s predecessor, former Conservative prime minister John Major, has warned that her deal with the DUP could endanger the peace process in Ireland.

May sold her leadership as “strong and stable” and warned voters not to elect a “coalition of chaos” led by Labour.

But it is her weak minority government, reliant on partners even senior figures in her own party can’t stomach, that looks unlikely to endure. Another election may come soon.

A key message from this one that is energizing people in the UK and around the world is that left-wing policies, encompassing strong support for Palestinian rights, form a realistic and winning program.

(Electronic Intifada. Asa Winstanley is a London based investigative journalist)