ELECTRONIC INTIFADA: The Palestinian Authority led by Mahmoud Abbas in the occupied West Bank is intensifying its crackdown on Palestinians exercising their rights to free speech.

Meanwhile politicians and activists in France are calling on their government to act on behalf of a Palestinian-French human rights defender arrested by Israel.

“Since the start of 2017, Palestinian authorities in the West Bank have carried out scores of attacks against journalists and activists, subjecting them to arbitrary arrests, violent interrogations, confiscation of equipment, physical assaults and bans on reporting,” Amnesty International said this week.

According to Muhannad Karajah, a lawyer with the prisoners rights group Addameer who represents many of the detained journalists in the West Bank, the situation is the worst it has been in a decade.

“There is no space for freedoms anymore, the Palestinian authorities in the West Bank are becoming a police state, and they are silencing the people,” he told Amnesty.

In June, for instance, journalist Thaher al-Shamali was arrested and charged with “insulting higher authorities” for an article critical of Abbas. He was held for 15 days, during which he was subjected to humiliating treatment. He is awaiting trial.

Then, journalism student Nasser Jaradat was arrested for reposting al-Shamali’s article, and is facing the same charges.

The Palestinian Authority annually receives hundreds of millions of dollars from the European Union and the United States, among other international donors who claim to promote human rights and free speech.

Amnesty is scathing about a decree Abbas implemented in July imposing sweeping restrictions on Palestinians’ use of the internet.

Amnesty said it is concerned that the new law “is being used as a tool to silence dissenting voices and opposition in the ongoing political conflict between the administrations of the West Bank and Gaza.”

“It violates international law and the State of Palestine’s obligations to protect the right to freedom of expression and the right to privacy,” Amnesty added.

Despite assurances the law would not be used against dissenters, Amnesty said PA intelligence officials have arrested at least six individuals and charged them under the new decree with “publishing news that would endanger the integrity of the Palestinian state” and “public order.”

All those detained were journalists arrested from their homes in raids.

A senior editor of the site, whose identity Amnesty protected, told the human rights organization that he was not given a written order or notice from the PA explaining why the site was blocked, and that the move was politically motivated.

“The Palestinian Authority is increasingly authoritarian,” the editor said. “They want to control all media outlets to block any voices exposing their crimes and violations.”

Quds has continued to be vocal in challenging the PA’s censorship.

Addameer is among a number of Palestinian civil society groups strongly criticizing Abbas’ decree as a violation of Palestinian and international law.

But he recently told visiting Israeli lawmakers he wanted to resume it fully, and boasted that “the Israeli security establishment is always saying that [I am] a partner.”

According to Amnesty International, Hamas authorities in the Gaza Strip “arrested at least two journalists in June, blocked journalists from reporting in some areas and restricted the work of a foreign journalist.”

The group says that 12 Palestinians were questioned and detained by Hamas authorities in July for comments they made on Facebook.

Its most serious allegation is that “at least three individuals reported being subjected to ill-treatment, while one of them also alleged torture during his detention.”

It cites the case of Mohammad Nafez al-Talowli, a resident from Jabaliya refugee camp who has organized protests against Hamas and its handling of the ongoing electricity crisis.

Gaza is suffering a severe shortage of electricity due to cuts imposed by Israel at the request of Mahmoud Abbas, who seeks to overthrow the Hamas administration in the territory.

Al-Talowli has been arrested three times, most recently in June, when, according to Amnesty, he was charged with “misuse of technology and distributing misleading information to the public for comments he made on Facebook criticizing a prominent Hamas leader.”

He spent five days in detention and was released on bail, on condition he halts his activism.

Palestinians face the intensified PA crackdown and the reported violations by Hamas authorities along with a surge in Israel’s routine violations against journalists and human rights defenders.

On Wednesday, Israeli occupation forces arrested Salah Hamouri in a predawn raid on his home in occupied East Jerusalem.

Hamouri, 32, a law student and former prisoner released by Israel in an exchange in 2011, is a field researcher and advocate with Addameer.

He is a Palestinian-French citizen. Addameer is urging people to contact French and European Union authorities to demand they pressure Israel to release him.

Elected officials and activists in France are calling on President Emmanuel Macron to act on Hamouri’s behalf: 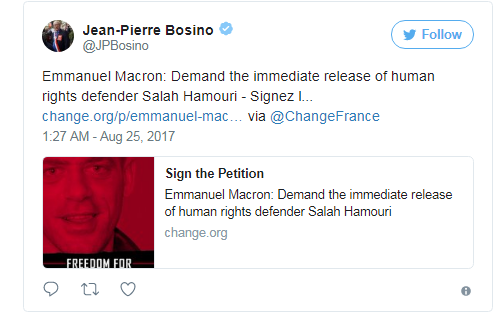 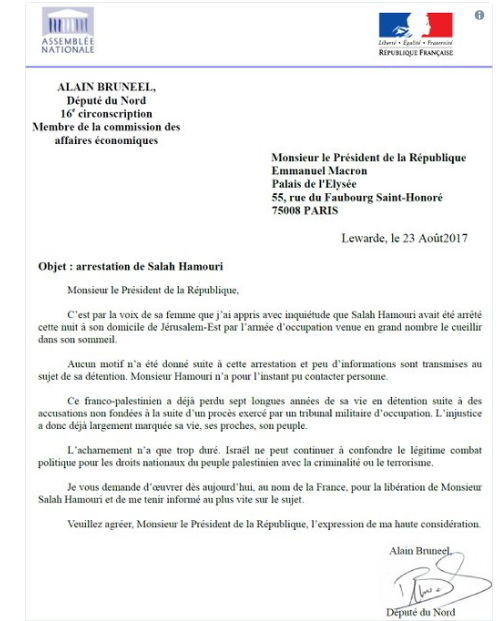 (Ali Abunimah is founder-editor of The Electronic Intifada)