Wikileaks stated, "The OTS (Office of Technical Services), a branch within the CIA, has a biometric collection system that is provided to liaison services around the world — with the expectation for sharing of the biometric takes collected on the systems. But this 'voluntary sharing' obviously does not work or is considered insufficient by the CIA, because ExpressLane is a covert information collection tool that is used by the CIA to secretly exfiltrate data collections from such systems provided to liaison services.” 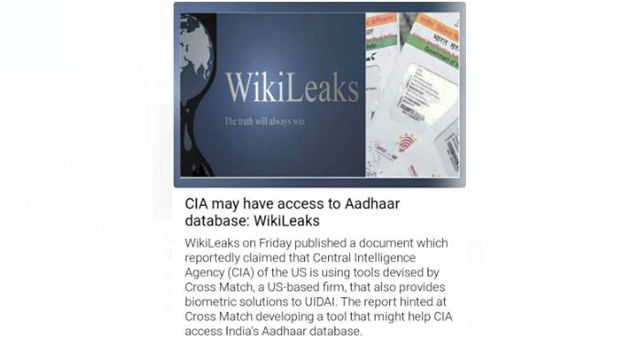 Online spying is the larger claim made by WikiLeaks substantiated by documents it has published now on its website. These maintain that CIA uses Express Lane, that is a cyber tool created by Cross Match Technologies to facilitate online spying.

Cross match Technologies, interestingly, is an American company that provides biometric solution to the Unique Unique Identification Authority of India (UIDAI). This is the statutory body for Aadhaar, that the BJP government has made mandatory despite court rulings to the contradictory. Anti-Aadhar activists have for long been pointing out that the outsourcing to a US company by India makes the system far from foolproof. They have been pointing out that the data of every individual citizen of India will now be available for mala fide purposes, such as spying, surveillance, and of course direct misuse. The government, however, has brushed aside all these concerns.

Official sources have told the media here that the Wikileaks claim is wrong and no such spying has taken place. Interestingly, the sources remain unidentified.

Wikileaks took the story further with a series of tweets, "Have CIA spies already stolen #India's national ID card database?” And "Aadhaar in the hand of spies".

The Aadhar case is coming up before the Supreme Court under the Right to Privacy hearing. Union Law Minister Ravi Shankar Prasad has tried to assure the apex court that Aadhaar data is secure, and the government has formed a high-level committee for Aadhaar data protection.